The Dutch born and educated artist Lawrence Alma-Tadema (1836-1912) got married in 1863, and the couple spent their honeymoon touring Italy. This trip had a profound effect on his artistic life as he was inspired by the classical ruins in Rome and Pompeii. Tadema later moved to London in 1870 and made it his permanent home.

Alma-Tadema had painted a number of Egyptian themes early in his career eg Egyptian Chess Players, 1865, is now in a private collection. An Egyptian Widow, which was painted in 1872, is now in Amsterdam's Rijksmuseum. Joseph, Overseer of Pharaoh's Granaries, completed in 1874, is now in the Dahesh Museum of Art New York. These paintings were big, bold and ambitious, but not yet stunningly beautiful.

He travelled to Egypt in 1902 to attend the opening of the Aswan Dam, guest of engineer and project chief for the dam, Sir John Aird. [Winston Churchill was another member of the party]. Aird was already known as a great patron of the arts, and he may well have brought Alma Tadema on the trip to commission another painting from the artist for the Aird collection. 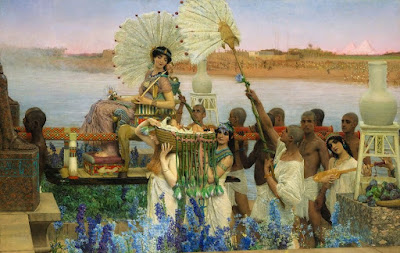 Alma Tadema was not a young man in 1902, yet he quickly fell in love with Egypt, just as he had fallen in love years ago in his travels to Pompeii. He offered Aird three subject options for the painting; Aird opted for The Finding of Moses and asked that his daughter be the model for Pharaoh's daughter being carried on the litter. Many of the Egyptian motifs were already located in Alma Tadema's sketchbooks from earlier years, so whichever Egyptian theme Aird chose would have been doable.

Since it was a very large painting, 213cm wide and 138 cm high, and very detailed, Alma-Tadema had to work on the canvas for two years. His works were always amazing for the diverse ways in which human skin, soft clothing and hard marble were painted. The fine execution and brilliant colour work of his earlier paintings were even more outstanding in Moses, but this time his lush pink flowers were shades of blue. The Finding of Moses was completed in 1904 and Aird happily paid £5,250 for the splendid work, full of classical motifs.

This work was exhibited twice by British Royal Academy, in 1905 and in 1913. And it was displayed for several weeks at the Metropolitan Museum in New York in 1973.

Some of Alma-Tadema's best exposure came via a very public display of his works - three of his paintings were exhibited at the 1904 World's Fair in St Louis: The Coliseum, At the Shrine of Venus and Caracalla: AD 211. These works would have been seen by millions of people, people who might not ordinarily go to art exhibitions. 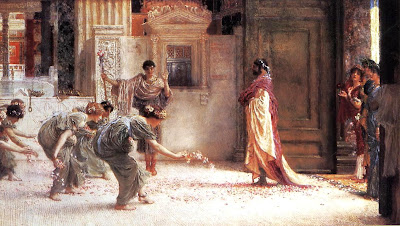 The Finding of Moses had been sold in 1995 for USA $2.8 million, so Sotheby’s New York knew what sort of price range to expect. In the event they sold the painting for $36 million in Nov 2010, nearly ten times the pre-sale estimate and a new record for Alma Tadema at auction.

The amount of money is fascinating for two reasons. Firstly The Finding Of Moses is, in my opinion, one of Alma Tadema’s best paintings. So it probably deserved to make a record amount. But it clearly shows the seismic swings in art taste. Sir Lawrence Alma Tadema was hugely popular in his own lifetime, desperately disliked from the 1930s until 1970 or so, and now (presumably) hugely popular again.

If you can believe a story told in Art News, a London dealer sold The Finding of Moses in 1955 to a local couple for $900. They paid for it in the gallery, took the painting, and left. An hour later the painting was found in a rubbish bin behind the auction room - the couple had discarded the canvas since they only wanted the frame. The dealer then offered the work free to museums in Britain if they would frame it and hang it, but no museum took the offer. Presumably there were some red faces in Britain when the $36 million auction price was revealed in 2010.


Another thing about taste. Until now the painting has lived in either Britain or the USA. After the 2010 auction, the painting moved to either Russia or China, suggesting that a taste for the Victorian revival has probably globalised.
Posted by Hels at 29.5.12

Finding of Moses is a stunningly beautiful painting. It is not so big though.

any painting longer than my height (157 cm) is HUGE to me! But really I was referring to the detailed elements that he painstakingly included in (all) his works. It must have taken him forever to complete.

Hello Hels;
Such a very distinctive painter and one whose work, as you suggest, has an almost tactile quality. The story of the discarded canvas in favour of the frame is quite extraordinary - strange enough to be completely true.

there is no story in blogs that is too bizarre to be true. I believe I have learned more through writing my own posts and through reading other peoples' posts than I did at uni!

Alma-Tadema is the the very essence of exoticism and orientalism in painting. It is amazing how out-of-favor some Victorian painters became. Rosa Bonheur is another example that comes to mind of a painter whose popularity plummeted but now has reascended.

Today it would be unthinkable that a painting that once sold for $50,000 (in 19th century dollars)could later sell for $75. The earlier price by itself would preclude that.
--Road to Parnassus

I like it and his works were used by Cecil B. DeMille. He seems to have been very likable but his children ended up with sad lives.

Wow, that story about discarding the picture (because of the frame) is pretty interesting. I wonder if it is true?!? It almost sounds a little too legendary to even believe.

I once worked with a museum director who had written his dissertation on Lawrence Alma Tadema. Ever since my time at that museum, I have really grown to appreciate the work by this artist. In fact, I usually show my ancient art students Alma Tadema's painting "Pheidias Showing the Parthenon Frieze to Pericles and His Friends". I like that Alma-Tadema paid enough attention to historical details to ensure that the Panathenaic frieze was painted in bright colors.

Alma-Tadema was indeed the very essence of exoticism and orientalism - that was his enormous appeal. I certainly understand tastes changing from one generation to the next, but I don't understand how he could go from being the richest, most successful and most loved Victorian artist... to being rubbish within 20 years of his death.

it struck me harshly, when writing about Shai Agnon, that even Nobel Prize winners didn't necessarily love or support their own children. There must be something about genius that allows the Great Man to escape his normal paternal (and human) responsibilities.

I have never seen Phidias Showing the Frieze of the Parthenon to his Friends before, so thanks for the reference. I will spend some time examining this work.

It seems to be as minutely detailed as his other paintings, but the interior setting makes Phidias a very unusual Alma Tadema work. It doesn't have the languid young maidens, the stunning blue waters, marble courtyards and wild flowers that we might be used to.

My favourite Alma Tadema is "The Roses of Heliogabalus" which was painted in 1888. Another very large, very lush, flower filled painting.

I was familiar with Alma Tadema's work, but had no idea that it fetched such high prices. His style and genre are rather typical of the Victorian age, very collectible for some, (but not me, which apparently is just as well!).

an amazing painting! The Roman emperor Heliogabalus was supposed to have planned something diabolical against his enemies, but the painting looks full of colour and beauty.

your taste is with the majority of art collectors; I am with the minority. However even I think spending $36 million on one work of art is insane, even if the eventual purchaser could afford it.

Mind you, I would say the same thing about spending $36 million on Monet or Picasso.

"The Roses of Heliogabalus"? whats happening? the banquet guests are suffocated by the sheer volume of the flowers, a true event apparently! better way to die than some Emperors devised.

Marion
Absolutely! But even with the nastiest of schemes, the emperor and his court looked fantastic. There is no detail that Alma Tadema has skimped on.....no colour he didn't make lush.

I have just read your Alma-Tadema blog with much interest. I am an historian of archaeology specialising in the representation of ancient Egypt and am currently writing a book about Alma-Tadema's Egyptian themed works. It was fascinating to read your comments about Alma-Tadema's 'Finding of Moses' and I was wondering if you would be kind enough to tell me the source for this information on the background of the painting. I have read most of the secondary literature on Alma-Tadema but I didn't know some of the details you mention.

stephanie many thanks. I don't know why I left the Sotheby's reference off the post. I will add it straight away.

Hel, visit The Alma-Tadema Ladies Part 1 – The Two Wives, Marie-Pauline Gressin-Dumoulin de Boisgirard and Laura Epps at the blog "my daily art display". You will enjoy the post.

thank you. I don't think I knew anything about the Epp family in general, or Laura's art in particular. How wonderful for Laura and Lawrence that the Epps family was part of an artistic circle which included Dante Rossetti, Elizabeth Siddal and Ford Madox Brown.

The Persistent Reader by Laura Alma-Tadema is a wonderful painting, as are Satisfaction (1893), The Bible Lesson, At the Doorway and The Tea Party.