Yea may not be the biggest rural town in Australia, but it is very pretty. 100 km north of Melbourne in the rich and hilly Yarra Valley, Yea (current population 1051) was originally settled in 1837. These first settlers left New South Wales, guided by the explorers William Hovell and Hamilton Hume and their team.

Unlike other towns that grew up after the 1850s gold rush, Yea was desirable because of its great agricultural opportunities. But Muddy Creek Settlement, as it was known, was not even laid out as a proper town until 1855. So the first sale of town lots did not occur until 1856 and a primary school was begun by the Anglican and Presbyterian churches only in 1859. 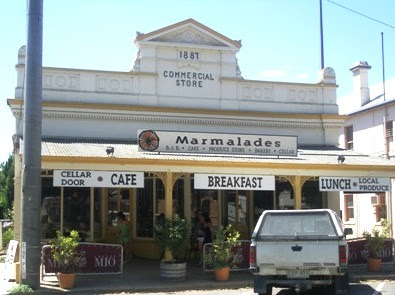 Eaton S Purcell left County Cork in Ireland in 1861 and first opened a mixed-business shop in Yea in the late 1860s. Purcell's General Store, the family’s second establishment, was built in Yea’s main street in 1887 in the Victorian Free Classical style. Times were good for Yea and for the Purcells - a branch railway line from Seymour reached Yea in 1883 when travel and trading both became easier.

Thanks to the National Trust, we know that the shop was a single-storey brick structure with a wide trussed gable roof, concealed at the front by a rendered and decorated parapet with a raised central pediment. A varnished and mirrored central partition divided the store centrally and an ornate balustrade surrounded a stairway to a large cellar.

Two recessed entrances opened to separate departments, with groceries and hardware on one side, and clothing and textiles on the other side. In fact the Purcells must have handled every product needed by good pioneering families of Yea and district, and even did deliveries by horse and cart to all the farms within 20 ks out of Yea. 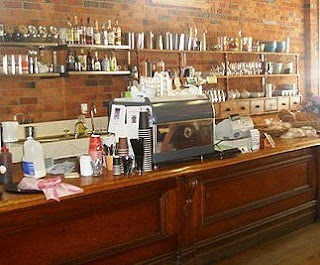 Many of the original fittings still exist in the shop and are heritage protected, especially the three large polished counters. My favourite features were the timber framed display windows and recessed shop entrances, and the wide timber veranda. I also like the portraits of the original owners (Eaton and Annie Purcell) hanging proudly over the original fire place.

I am not sure when Marmalades Café and Restaurant took over the old Yea shop. But it probably doesn’t matter - the old Purcell's General Store is still of architectural and historical importance, especially relating to the late 19th and early 20th centuries.

More recently, artists in the area have moved to country towns to avoid the hustle and bustle of the big cities. However that means they largely flourish (or flounder), depending on work they can sell to tourists. Yea council suggests that a feature of the town is the use of fine historical buildings as the site for fine restaurants - often combining the function of art galleries. At Marmalades, as well, the owners display and sell a number of works from local painters, sculptors, ceramics and printmakers. Above the country breads, jams, chutneys and berry sauces. 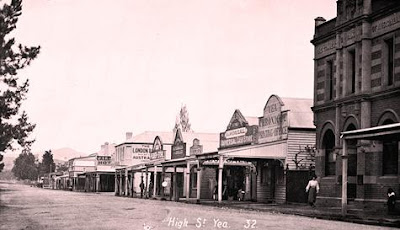 I've never heard of this town but I'm it on my bucket list. It sounds and looks lovely. The old Yea shop is beautifully preserved. Great history too.

It's amazing what treasures can be uncovered in these regional towns.

I've not been there but neighbours have a house there and they have invited us to visit. Their car bears the scars from many kangaroo impacts.

the old gold towns (eg Castlemaine) have much more elegant 19th century architecture and have much better cultural facilities than Yea. But I was absolutely delighted to find a 1880s shop that was intact. Commercial properties are hardly ever protected with heritage overlays.

isn't that the truth! I was in Alexandra and would not have stumbled onto Yea accidentally. But I asked where the best art galleries, crafts centres and historical museums in the Yarra Valley were. This was one of them.

always accept when people ask you to visit :) I have been taken to some of the most beautiful or interesting places in the world... by locals who are proud of their town. I said the same thing about tiny Niagara On The Lake earlier this year.

Hello Hels:
Yea looks to be exactly the kind of small town, complete with its C19 architecture, which we should find, as we are certain many others do too, an absolute delight. Sometimes it is the small town, as opposed to large cities, which convey so much more of the spirit of a country and its people.

Wow, 18 years between settlement and the apportionment of the first plots is a long time, it must have felt like a lifetime!

I love visiting old places like this, especially if they still have the original fixtures and fittings. It must have been fun to go and visit it in person!

I am definitely a big city type of woman. But only for the amenities, not for the sense of community. You are quite right. There is something special about small rural communities that is old fashioned, mutually supportive and outdoorsy-healthy.

I loved visiting! Economies everywhere are struggling... and rural regions seem to be struggling much more than urban centres. So I am glad that the shop's heritage protection has made it a hub for great food and wine, quality paintings and crafts, and historically-minded tourism.

the Yarra Valley is heaven on earth for vineyards. So although the town did not benefit directly from the gold rush, it celebrates the wine industry gloriously :)

What a beautiful place. Thanks for sharing. Greetings from Montreal, Canada.

Linda
sometimes we want medieval cathedrals and renaissance palaces, but sometimes we are happy to enjoy small 19th century treasures. I got lucky :)