Family health and the Peckham Experiment: 1926-50

Throughout the history of this blog, I have been interested in a growing medical concern for fresh air, sea-water, sun, beach huts, walking gardens, pavilions, pleasure piers, lidos, healthy food and physical fitness.  The problem was that wealthy families could always afford to pay for holiday time in a spa resort or a vigorous ski holiday in the Alps. But what happened to families with inadequate housing, no paid holidays in the fresh air and little access to lidos and pleasure piers? 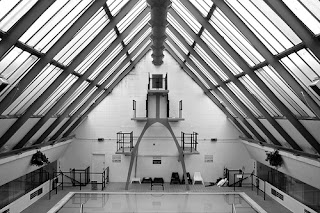 Pioneer Health Centre was specifically set up by a husband and wife medical team (Dr George Williamson d1953 and Dr Innes Pearse d1978) in Peckham, a working class suburb of South London. Motivated by modern ideas of hygiene and good health, the founders wanted to study how light, air, openness and vigorous exercise could be enjoyed by working families and could influence their health outcomes. They did not want to run an illness service; rather they insisted on promoting conditions for personal, family and social well-being.


From 1926-9, the project was started in a small way in St Mary's Road, to serve families living within walking distance. The initial data were written up by the doctors and funding was sought to build a larger centre. Pioneer Health Centre then re-opened in 1935 in a purpose-built piece of modernist architecture.

I am impressed by how the architect, Owen Williams, used modern techniques so that the architecture could play an active role in the Pioneer Health Centre’s philosophy. For example the walls of glass around the Centre were intended to
a] maximise the natural light and
b] retain a structural transparency, representing informality and a welcoming attitude to the community.

The large swimming pool was covered by a glazed roof; all windows could be fully opened, allowing natural air to circulate inside. A flat roof alongside the pool provided ample space for open-air gym classes, as we can see from the photo. Older children had a covered playground that opened directly onto the lovely gardens.

Drs Williamson and Pearse recruited 950 local families to be part of the health-care experiment. For a shilling a week, the families had access to a range of activities eg physical exercise, swimming, games & workshops. Perhaps locals couldn't afford a shilling a week, but the goal was to make the health centre feel like a club which belonged to the families, not an outside charity.

Members were asked to take part in a formal health check each year, and their health was informally monitored as they participated in activities from week to week. The only traditional health treatment on offer was contraception. 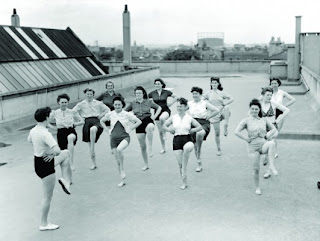 The core facilities were accommodated by the architect eg cafeteria, games rooms, pool, nursery and gym. The members were actively encouraged to initiate their own choice of classes and activities, using the facilities offered by the Centre at no extra cost eg dress making, ballroom dancing. Self help was the buzz word.

According to Transition Town Tooting, the doctors also recognised the importance of good nutrition, and had a farm providing the centre with fresh, organic produce.

The Centre closed down during World War Two, but was restored and reopened as soon as the soldiers had been demobilised. Alas the bright and breezy Centre finally closed in 1950. It failed for different reasons: firstly it was concerned exclusively with the study and cultivation of health, not with the treatment of disease; secondly it was based exclusively on a limited suburban locality; thirdly its basis was contributory and not free; and finally it didn’t conform to the newly developed NHS structure. But what an amazing concept it had been between 1926 and 1950. 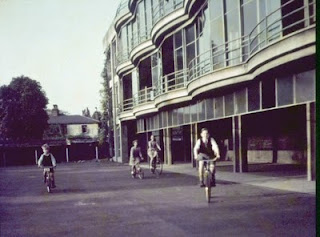 The old archives from the Pioneer Health Centre, including the medical data collected during the experimental years, are now in the Wellcome Library for the History and Understanding of Medicine.  And a review document, called The Pioneer Health Centre Peckham London, was published in 1949 by the National Trust for the Promotion and Study of Health. For an excellent analysis of the rather radical politics involved in self help and in cooperative health facilities, see Anarchism and the welfare state: the Peckham Health Centre by David Goodway.

I was relieved as I read on to discover this was not a history of Butlin's Holiday Camps.

England must have a pretty miserable place for the poor pre WW II.

Hello Helen:
This is a most interesting account of a snapshot in time of public health developments. The Peckham Project does indeed seem to have been pioneering thinking in its day.

In Budapest we are very aware of the many programmes which were introduced under the Communist Regime to promote the health and well being of young people in general and families in particular. Holiday apartments were specifically designed to accommodate workers for an annual break with a wide range of physical activities on hand to amuse and promote fitness amongst the workforce.Sadly, many of these holiday complexes have now fallen into disrepair and holiday tastes have generally become much more sophisticated.

Despite the many changes to society and medicine since the Pioneer Health Centre first opened its doors, we believe that the principles identified by the Doctors as contributing to health are of continuing relevance to society."

it was not great to be the working poor anywhere. But Drs George Williamson and Innes Pearse were well ahead of their time. Fancy professionals allowing the clients to set their own goals for good health, then giving the clients the tools to achieve those goals!!

Radical enough to warm the heart of an old lefty.

The Peckham Project seems to have been very progressive and flexible, making the rooms and resources available for whatever activities the member families loved most.

There are plenty of photos around still, but they tend to be mainly involved in ballroom dancing, swimming and exercise classes. I can't find many photos about holidays, gardening, bike riding, team sports, music classes, lectures etc.

What a shame that many of the holiday complexes near Budapest have fallen apart. Holiday tastes may have become much more sophisticated for the wealthy, but working families still need decent holidays.

great reference, especially for the photos which are very evocative of a long gone era.

It is right and proper that the Pioneer Health Foundation should continue to promote the legacy and the ideas of the original Centre. But I wonder if each generation has to create its own philosophies and techniques. What was brilliant in 1926 might need to be rethought in 2012.

Butlin's.. wow I haven't heard that name for ages. But the timing is spot on. From 1936 and 1966, overlapping the dates of The Peckham Experiment, heaps of Butlin's camps were built. By the time I moved to Britain in the early 1970s, Butlin's were still hugely popular with the family market.

I wonder if they were the same working families who would have been attracted to the Pioneer Health Centre in Peckham pre-war?

Since the families didn't pay for the true costs of running the service, who did? Surely the funding body or company has the major say in how a health service survives.

Anon
you are so right. Wellcome Trust said funding had always been a problem, since membership never achieved the levels necessary for the Centre to be self-financing. Worse, the Centre's practices and philosophy would not fit into the newly formed National Health Service. And being funded by a profit-making drug company would have been totally unacceptable.

I wonder if there is room for a centre like that to reopen? With obesity rates, especially in children, on the rise, it seems like this could be more vital now than ever.

nod... and not just obesity. Children and parents don't exercise any more, beyond playing games on the tv screen. What happened to team sports? What happened to families cooking together and eating around the kitchen table, rather than grabbing junk food?

I would love it if a modern day Pioneer Health Centre was established. But people go to doctors for ill health and to gyms for exercise classes. I wonder if a modern day health centre (as defined in the post) would succeed.

Nice that the Peckham Experiment looks so promising and encouraging. The photos are really coggent about its progress. I wonder what ideas and thouhgts promote this generation. It is kind of diffrent from old generation.

normally I select topics for this blog according to what is interesting the students. But I worked in a community health centre myself for a long time. Different decade and different country, but the same issues exactly. I am still personally committed to the topic.

I would have thought that Butlin's would cost more, only being there to make a profit. It was more about entertainment I suppose, rather than healthy activities, which were perhaps a side benefit of Butlin's.

The entertainments were broad and did include swimming, tennis and ballroom dancing, but I wonder if the word "healthy" was ever specifically used in Butlin's advertising.

Profit-making, as always, seemed to have been the issue. There _were_ some non profit cooperative camps in Britain, but I assume they were developed just for members of the relevant trade unions. And they were smaller and less sophisticated (sic) than Butlin's.

In any case, people would not accept shared bathrooms and toilet blocks nowadays.