A beach pavilion is a public facility on the beach where children and adults can change in and out of bathing suits, store their street clothes while they are swimming and shower the salt water off before going home. The fancier pavilions may have had a swimming pool and coffee shops; the simpler pavilions did not. 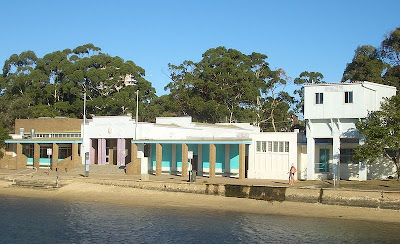 Surely then, Sydney would have as many beach pavilions as Britain, also built in the late 1920s and throughout the 1930s. After all, Sydney’s population enjoyed a gorgeous natural harbour, fine beaches facing the open ocean and excellent weather. 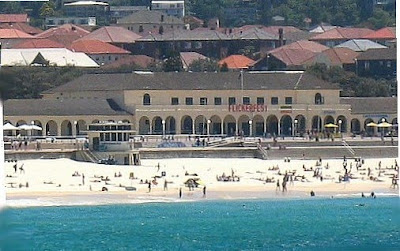 In 1906 the Bondi Surf Bathers' Life Saving Club was established. By this time Waverley Council had already erected changing sheds, and a sea wall, at the rear of the beach, was built between 1911 and 1920. Due to the increased popularity of beach swimming and surfing, in 1923 an improvement scheme for Bondi Beach was launched. A local architectural firm won the competition to design the new works: a surf pavilion was a major element of the scheme, and the foundation stone for the pavilion was laid in May 1928 by the Waverley mayor.

The Bondi Beach Pavilion (1928-9) was built in a form that reflected aspects of the Deco style that was so fashionable during the Inter War era, along with Mediterranean elements. The core building was two storeys high, with single-storey wings encircling a large central courtyard. It was given a colonnaded facades on four sides, frontage being 130 metres and the depth being 50 metres. It was the largest beach pavilion built in Sydney. The pavilion, which opened in Dec 1929, served several purposes: changing facilities for swimmers, food outlets and entertainment venues. There were even Turkish baths and a ballroom. 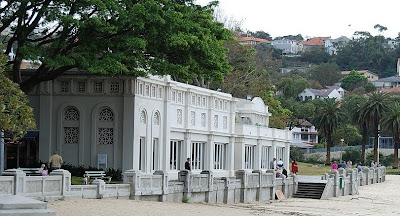 The Bathers' Pavilion in Balmoral Beach was originally built as a changing shed by Mosman Council in the early 1920s. The building was upgraded to a very grand Deco-Moorish complex in 1929, and despite more modern development in the area, the views towards the Heads and Middle Harbour are still very special.

Nielsen Park Conservation Management Plan believed that of all the pavilions in Sydney, there were 3 important pavilions built in the 1920s: the Bondi Beach Pavilion, the Bathers’ Pavilion at Balmoral Beach and the Brighton Le Sands Beach Pavilion. For an excellent photo of the Brighton Le Sands beachfront, see Sydney - City and Suburbs blog. All three were built at the height of a development boom and reflected the heightened public aspirations of that time, particularly in regard to beachside recreation. The Management Plan noted that these three examples had to varying extents changed their original functions, while the Nielsen Park example remains virtually unchanged and provides the same facilities as was originally intended.

By contrast the Shark Beach pavilion, Nielsen Park was built at the height of the Great Depression in 1932 using restricted resources. Shark Beach’s pavilion differs from the other three in another important way; it was purposely made to be subservient to the park landscape is accordingly set well back from the beach. The others were sited on the beach, and were meant to be dominant landmarks adjacent to the baths or main surf beach.

Cronulla built at least three different pavilions in the Inter War period, and they seem to be very simple in their architecture. The colours are very bright and beachy, often white and sky blue as in the now slightly derelict Shelly Beach building. W.F. Foster and Co. built the Oak Park pavilion in 1939, probably the last of the Cronulla sites, to replace the earlier timber dressing-sheds. For a fine picture of South Cronulla's art deco Lifesaving Club, pavilion and beach, see Sydney - City and Suburbs. 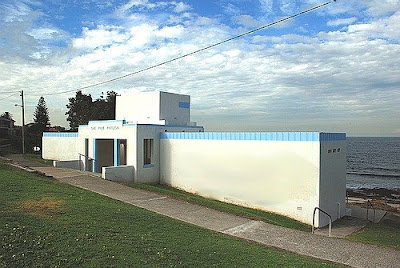 
I know that during the long Depression in Australia, the beach was often the only entertainment families could afford. But by 1939, communities faced more pressing issues than building resources focused on pleasure. Sofar I haven’t found any pavilions built in Sydney, once war began in 1939.

Since this post was completed, Your Brisbane Past and Present showed gorgeous changing rooms in that city. One, the Southport Bathing Pavilion 1934, looked to be similar to Shelly Beach pavilion in Cronulla size-wise and shape-wise, but it had a special entrance. Southport's decorative gabled entrance had three arches and barley sugar pillars. The other, Main Beach Pavilion 1935, was also designed in the Spanish Mission style.

A great post on the pavilions. Thanks for the link back to my blog. I also have a few other shots of the pavilions at Cronulla on my blog too, besides this one that I took at Gunnamatta.
Sydney - City and Suburbs

What great, impressive places. Bit bigger than our beach huts, that's for sure.

Thanks both of you :) J Bar if you have any photos of other beach pavilions in Sydney built before 1939, I would love to show them. Or refer to them.

ahhh a gorgeous photo of South Cronulla. I immediately added a reference to your blog, many thanks.

The only real beach pavilion in Melbourne that I can use for comparison is West Beach in StKilda, but even that has seen better days. Eastern Beach Geelong and Beaumaris are both classy restaurants now. The Baths in Sorrento are great for wedding receptions.. but where can ordinary families change for swimming?

What a fascinating post! I particularly like the Shelly Beach pavilion, which looks so clean and outdoors-like, to my eye. Some of the art deco lido complexes here in the UK are great, too.

Londongirl, good to hear from you.

I love the British lidos as well and have written about them often. Just two articles that immediately come to mind are:

At the risk of becoming overly focused on Victorian, Edwardian and inter-war leisure time activities, I am now writing an article on Blackpool.

Thanks very much - off to have a look at those two, too!

Hi Hels
I did a search at the SLQ OneSearch site. "Bathing pavilions brought up nothing, but there are a large number of posts that come up for "bathing" and I can see that some have bathing boxes and pavilions in them. Here is the url:

The dates all seem compatible with my post on bathing boxes, except for the Yeppoon Beach date of 1926. By that stage, women’s modesty wasn’t quite as threatened as it had been 40 years earlier.

Very interesting post on these stunning buildings. I really enjoyed the Cronulla Pavilion.

your post is very informatics,its a really great post on the pavilions. you may like also visit on Cronulla Beach. Cronulla beach looking very beautiful at the evening.

it is interesting that you both selected Cronulla, even though it isn't as grand as some of the others. Perhaps it was more family-friendly, more typically Australian, less touristy.

My husband is a Bondi Boy. Although he left home in 1970s, he still goes back to visit Sydney as often as possible.

Quite right,,, many thanks. I will change it straight away.