Historical Niagara On The Lake: not just for honeymooners

I am fascinated by European history in Canada and have visited Canada often. But Niagara on the Lake (pop 15,500) seemed to be a post-war honeymoon site and not very historically important. Mea culpa Niagara! The town's historic district was actually designated a provincial Heritage Conservation District in 1986 and a National Historic Site of Canada in 2003. 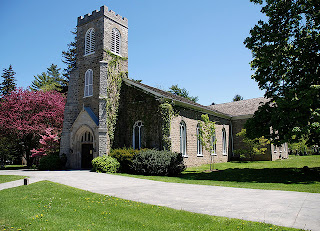 We need to go back to 1776, when representatives from each of the original 13 American states voted in the 2nd Continental Congress to adopt a Declaration of Independence. In it, they explicitly rejected the British monarchy and Parliament, leaving loyal British subjects with nowhere to live. In 1781 the British government established the town of Niagara just on the Canadian side of the border, presumably to offer a safe haven to British loyalists, during and after the American Revolution.

The location in Ontario could not have been better – just where the Niagara River and Lake Ontario meet. But Niagara’s proximity to Americans on the other side of the border was both advantageous and risky. During the Anglo-American War of 1812, American forces invaded Canada, and captured the town and its fort. Later the Americans pulverised Niagara town as they retreated in Dec 1813. 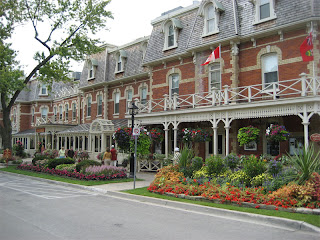 Today the Niagara Heritage Trail is a historic route taking in the Canadian coastline of the Niagara River and the Niagara National Historic Sites. Along the route, visitors can visit Old Fort Erie, site of a major battle in July 1812 between the waiting British troops and the advancing American troops. Chippawa Battlefield Park, site of the first major battle on the Canadian side during the War of 1812, is also of interest.

I wondered why so much military effort was put into taking or defending this tiny part of the North American continent in 1812. Clearly the Niagara River provided the vital water transportation route between Lake Ontario and Lake Erie, so perforce the Niagara frontier became the scene of many rather tragic battles. Most of the former military sites, like Fort George (abandoned in 1814), Navy Hall and Butler's Barracks, have been returned to their original condition. Fort Mississauga (built on the lighthouse site in 1814) is also interesting.

And talking of the war (and pubs), examine The Olde Angel Inn, first established in 1789. Captain Colin Swayze of the Canadian Militia wanted a bit of leg-over during the worst of the War of 1812. He hid in the beer cellar but American troops eventually used a bayonet to find him and kill the amorous captain. The Olde Angel Inn was itself burned to the ground during the war, only to be rebuilt three years later along the original plans - including the wooden tables in the dining rooms and exposed beams holding up the roof.

An incomplete St Mark's Church went up in July 1792, even though the nave took another decade to be completed. Thus full services could not be held in St Mark’s till 1808. Alas almost all of this historic institution was burned down in the war of 1812. The British eventually rebuilt the town with lovely Georgian and mid-Victorian architecture, making the streetscapes look splendid. Thankfully St Mark's Church was restored in 1820 and later enlarged.

McFarland House 1800 was the brick Georgian home of John McFarland and his children, part of the reward granted to the Scotsman in return for his services to King George III. The home was fortunate to have largely survived the burning of Niagara by the Americans in December 1813. This makes McFarland House one of the oldest structures in Niagara-on-the-Lake. During the War of 1812 McFarland House was used as a hospital by both the British and the American armies, and a gun battery was situated on the property to help guard the Niagara River.

Another fiery Scotsman was William Lyon Mackenzie. Born in Dundee in 1795, he moved to Canada in 1820. The Colonial Advocate was a newspaper for which he was the publisher, editor, writer and paper carrier. I have never seen the Mackenzie Heritage Printery and Newspaper Museum, located in Mackenzie’s home, but it is Canada’s largest working museum of printing. And it is recommended in Get Up and Go (summer 2012). 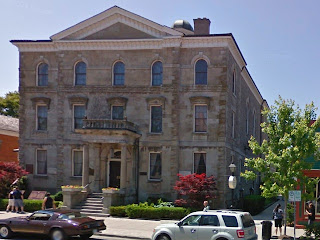 The Niagara Apothecary is a careful restoration of a pharmacy that had operated in the town from 1820 on. The two arched plate glass windows show an Italianate taste, but it is the interior that is splendid. The lustrous black walnut and butternut fixtures, elaborate plaster rosettes and crystal gasoliers projected an impression of  wellbeing back in 1869, and still look impressive now.

The Court House was designed by a Toronto architect in 1846 and opened in 1847, in the fashionable neoclassical style that everyone wanted for public buildings. Though the courts were moved in 1862, this building is still well used. Today the Old Court House Theatre, located where the Bernard Shaw Festival began in 1962, has a 327-seat theatre in the original Assembly Room.

In 1848, the first bridge opened across the Niagara River. Designed as a suspension bridge for carriages and pedestrians, it was located where the Whirlpool Rapids Bridge is today. It didn't take long before the Great Western Railway reached Niagara from Hamilton, via to the Suspension Bridge. Work then began to rebuild the bridge as a double-deck span, with rail traffic using the upper level while the lower deck was for carriages and pedestrians. The new bridge was opened in 1855.

My favourite of all the Victorian buildings in Niagara is The Prince of Wales Hotel which was built in 1864. It was renovated a hundred years and restored to its original Victorian charm. The hanging baskets of coloured petunias remind me of Victoria on Vancouver Island. 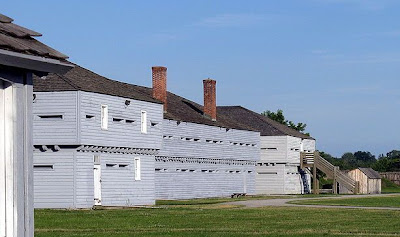 Fort George, built in 1799 and abandoned in 1814.
The fort was later rebuilt and used by the Canadian Army as a military training base during WW1.

Established in 1961, the Niagara Falls History Museum is nearing the end of major expansion works and will re-open to the public in July 2012. The Battle Gound Hotel Museum is well located in Lundy’s Lane Battlefield but more than that, I think it is very civilised of the Canadians to house this museum in a restored 1850s tavern house. 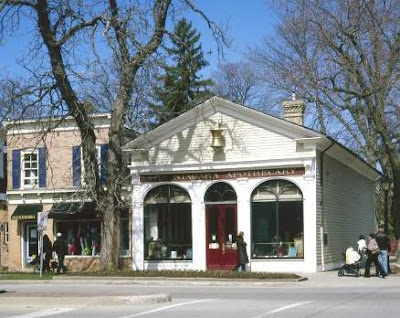 Hello Helen:
We have so enjoyed reading this account of Niagara, all of which was completely new to us. Yes, we think that the Prince of Wales Hotel might be a favourite for us too,but it is inspiring how much excellent restoration has taken place throughout the town.

We have never visited Canada, but with so many British connections and influences we are certain that we should find it all very fascinating.

Niagara has a history? Well, I only knew it back to when the first woman went over the falls in a barrel. It seems it has quite a history.

you haven't lived! Canada is one of my favourite places on earth, plus I have lots of relatives who are good for food and a bed :)

that was largely what I said too :) But an Australian friend, married to a Canadian, took us around Niagara and surrounds, a few years ago. Considering the town was largely destroyed during the war, it is still a lovely part of the world.

The town is "Niagra-on-the-Lake" and indeed is very pretty, especially when there are less of us tourists there as in the spring and fall. The small town of "Niagra Falls" is what surrounds the falls and is mainly a rather ugly collection of Hotels and what almost seems like a fair midway. There is also a "Niagra Falls", USA. As we live in Toronto, we go to all three quite often.

Thank you!!! I should have clearly differentiated between Niagara On The Lake and Niagara Falls.

How fascinating, had heard nothing of this. Off to explore. Thanks again Helen.

lots to explore. Especially if you know as little as I knew about the War of 1812. It doesn't seem enough to say it was a war fought between the United States of America on one side and half of the British Empire on the other.

phew... I was almost going to bow to a local's superior knowledge :)

Gorgeous! I didn't know the history either. This will have to be on my list of places to visit next time I'm up that way. Thanks for sharing!

Thanks for this post! As other readers have noted already, the town of Niagara Falls is a bit of a disaster but Niagara on the Lake is just lovely. I too love the Prince of Wales hotel (and it really is a lot like Victoria BC)!

We usually get mesmerised by the publicity hype over London, Paris, Singapore and lose sight of the small places. And Niagara On The Lake really IS small.

*nod* As I get older, I am finding historical pubs and tea rooms to be as meaningful as Eiffel Towers and Statues of Liberty.

Partially because I really do love a cold beer or a fab lunch. Enjoying the local cuisine is a key part of travel.

But also because a social historian learns more from the architecture and decoration of a small community resource than he.she learns from a gigantic monument.

I've visited Niagara-On-The-Lake several times in the past mainly for the Shaw festival. In fact my wife and I have been discussing going again this summer. If we do, I'll certainly be sure to visit some of the landmarks you've mentioned here.

because I was interested more in Georgian and Victorian architecture in this small historically-minded town, I forgot to mention the important Shaw Festival. Yet if you believe the festival's own publicity, 300,000 people attend the Shaw Festival each year (May-Nov). It must be enormous.

I have relatives in Vancouver and Winnipeg, so I don't go to the Lake Ontario region very often. Silly me.

Thanks. Today's lecture on the history of Southern Ontario was more interesting than I thought it was going to be.

People who visit only Quebec, Montreal, Ottawa and Toronto miss a great deal.