Last year I had been examining a series of landscape paintings, from very different countries, that seemed to share nothing but their inter-war timing. Paul Nash, Eric Ravilius and Harry Epworth Allen were British, Reuven Rubin was Israeli, Dorit Black was Australian and Rita Angus was a New Zealander. I concluded that in all these landscapes, the boldly presented hills and roads emphasised their treatment as mass and form. And like cubist painting decades earlier, the mountains became interconnecting planes of varying depth. In fact the simple, strong and bold lines were still quite cubist in feeling. 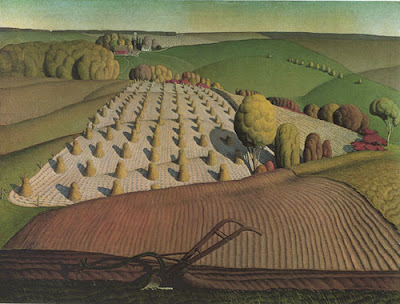 So how did the American artist Grant Wood (1891–1942) compare and was he exposed to landscape art from other countries? In 1913 he enrolled at the prestigious School of the Art Institute of Chicago where he studied the world of contemporary art. And during the 1920s, he made four trips to Europe, where he studied many styles of painting, including post-impressionism.

Since I was unfamiliar with Wood’s work, I will cite the findings of the University of Virginia with confidence. The composition of Wood's landscapes employed modernist tools freely. Trees, hills and people were distinctly streamlined, and the streamlining was employed to the same effect that it was on everything from architecture to automobiles in the 1920s and 30s: it created a sense of vast and easy movement, only in this case it was through an open landscape rather than contained in a piece of machinery. 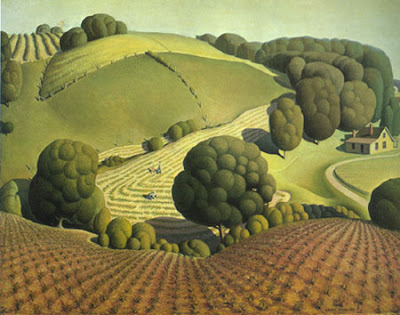 While growing up, he said he loved the soft, warm soil between his toes as he walked barefoot through the fields. His 1931 work Young Corn depicted the hills as round and friendly. Wood's typically fluffy, impossibly round trees stood solidly against the straight, sharp rows of planting and hay that dipped down into the painting. 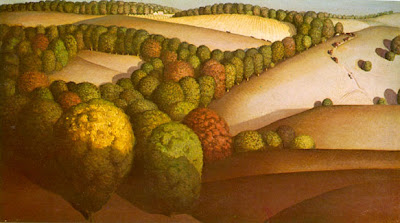 Further, modernist compositions from Sheeler's American Landscape to the houses of the International Style relied heavily on sharp and linear geometry. Wood also employed this kind of geometry in his paintings, not only in the arrangement of the scene, but in the actual execution itself. The sharply retreating lines of crops or trees, interrupted by an angular farmhouse in Fall Ploughing 1931 and Near Sundown 1933 were indicative of Wood's interest in this, as well as the carefully rectangular layout of such paintings as Spring Turning 1936. The regularity found in many of these compositions was a similarly modernist tool.

Art Deco appeared to have been Grant Wood's modernist niche, one he adopted more readily than any other offshoot of modernism. In evolving a style of artificial geometries, clean surfaces and relentless patterns, he was like the Art Deco decorators of his day. Although he surely would not have admitted it readily, the unlikely pairing of modernism and the regionalist Grant Wood bore unexpected fruit. 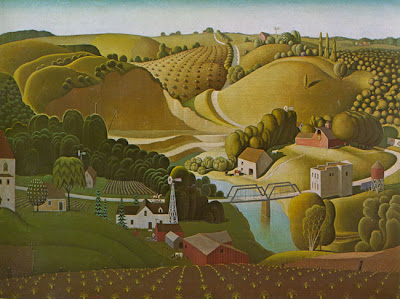 In my previous post, I thought that bright sunlight and cast shadows in all the landscapes helped to define the natural forms. And importantly, for all the artists, the springy hills left almost no space in the painting for sky. Both these characteristics were equally relevant to Wood.

For a last comparison, look how Grant's British contemporary Paul Nash (1889–1946) remained entranced by the English countryside, recording the hilltops outside Oxford or Swanage in Dorset. He used vivid colours to reflect the heat of summer, or a bouncy tennis ball to display optimism in Event on The Downs 1934. 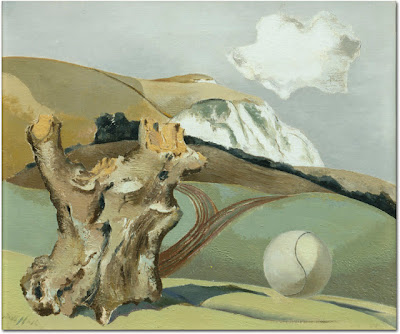 They are great paintings. I qualify that with, I really like them.

I love Dorrit Black's landscapes most of all. Yes I am an Australian but her hills, cliffs and roads look bouncy and inviting. Wood's are more colourful and more geometric, but less inviting.

So interesting to see the similarities of Wood's work and that of John Nash, and indeed that of the much later Eyvind Earle.

Hello Hels:
Our immediate thought on opening your post this morning was that we were in fact looking at a Nash painting. Instead we discover an artist, previously unknown to us, whose work bears remarkable similarities and, for reasons we cannot quite ascertain, appears to fit readily into that British and European school of painting - if such it may be termed - which typifies for us so much of the inter war period.

But what work. 'Fall Plough' is truly a magnificent and exceedingly powerful painting which not simply draws the observer into the landscape but almost, or so it seems to us, to compel him/her to be immersed in those highly geometric, yet seductive and sensuous, hills and fields.

Our appetites are whetted, thank you, and we shall look to know more about this most interesting artist.

Wonderful work, thank you for highlighting a great new painter to me.

Hello Hels [again]:
Of course, we now realise that Grant Wood is the painter of 'American Gothic' which must, we imagine, be his most iconic work.

I did a lot of art history at uni, but always Italian, French, British, Spanish, Dutch, German and Australian based. This is new territory for me too.

there is no doubt that the American countryside is far more complex than ours which is often quite stark. If you had asked Grant Wood to paint Australian landscapes, I bet they would have looked very different.

John Nash's best landscapes were a bit earlier than Grant Wood's, but they MUST have been a great influence on the younger artist's ouvre.

I must have a look for Eyvind Earle's works. Thanks for the tip.

Fall Ploughing, 1931 is a terrific painting.. it invites the viewer in, as if he or she was standing on a hill, looking down on the ploughed field.

I always strikes me that the inter-war period was a short, but very mixed era - the giddy 20s followed by the hideous Depression and preparation for catastrophic world war.

I would not have known of Grant Wood either, except for a fellow blogger's comment last time I was looking at inter-war landscapes.
Thank you, Billback.

I really should have mentioned American Gothic, but I wanted to avoid art cliches and give Wood's landscapes a real chance to be appreciated in their own right.

Note that American Gothic was set in Iowa, same as Stone City Iowa and many of his other works.

I love the Grant Wood pieces, especially Stone City Iowa. I did not notice about the relatively small focus on the sky until you mentioned it. His paintings definitely instill optimism in me (as does the Art Deco movement), a sense of freedom and of moving towards a brighter future. I'm not too keen on the Nash piece in this context. It doesn't inspire me like the other paintings but then I might like it on its own.

agreed! Art Deco is normally thought of as energising architecture or the applied arts, not painting. Yet noone showed how modern and full of movement Deco was ... more than Grant Wood.

I was hesitant to include this particular Paul Nash landscape because it is wishywashy in comparison to Grant Wood's colours. But Nash's hills were still rocking and rolling.

I love the way the road trails away in Stone City, Iowa.

it is very intriguing! And what a joy that history blogs introduce us to a whole new world. Even mature aged citizens like ourselves :)

Thanks for informing about this talented artist I had never heard of before.

It is very interesting to see the work of research done by the artists of the era. It seems that the stigma of WWI then the big depression led them to express a world that was trying hard to rebuild itself but never really succeeded as WWII was round the corner and already brewing. I find that this peculiar climate is translated in the style, colours and subjects.

This American artist certainly did make four trips to Europe, but he didn't live his entire career in Europe like Mary Cassatt or John Singer Sargent. So I am sure American art lovers would know Grant Wood very well indeed.

absolutely. It seems inevitable that the financial, political and social climate of the era would be translated in the style, colours and subjects of that era's art.

And it seems inevitable that artists might also have a more personal or group response to the era. German artists from the new objectivity school, for example, may have painted landscapes that were not inviting and productive.

Great post! I'm quite familiar with Grant Wood, but not familiar with Paul Nash! His landscape reminds me of Surrealism (I'm thinking of some of Dalí's fantastic imagery and landscapes). I'll have to do more research to learn about Nash's influences...

Don't forget to differentiate between the landscapes of Paul Nash (1889–1946) and his younger brother John Nash (1893–1977). I have a rather wonderful John Nash at http://melbourneblogger.blogspot.com.au/2012/01/two-exhibitions-of-british-landscapes.html

nice idea.. thanks for sharing..

I have added Grant Wood's 1931 painting called Young Corn. As it fits well into Wood's landscape history, I hope you enjoy it.

Art Contrarian wrote a very useful blog post on Grant Wood's paintings in the last 3 years before the artist's death.

Have you seen California painter Warner Williams? kind of like a new Grant Wood - http://warnerwilliams.weebly.com/archive.html

many thanks. No I am not familiar with modern art and am still grieving the deaths of Joshua Reynolds, Thomas Gainsborough, George Romney and John Singleton Copley :)

But seriously, what I liked about Grant Wood's work were the simple, strong and bold lines in the foreground and the bulbous mountains behind. So did Warner Williams see the art of the interwar artists that I was discussing? Did he enjoy their emphasis on mass and form? Or did he believe that brilliant colour and light were more important?

I had another thought! Examine the paintings of Sir Brian Cook (1910-1991) - "blue trees, mauve shadows, brown streets, bright orange roofs and yellow sky". You will enjoy them.

I was not aware of Wood's work except for that couple with the pitchfork until I saw this!
Love his other stuff!
Thank you, Hels, and Happy new year!

agreed.. American Gothic (1930) was certainly one of the most familiar images of American art, even now. I think it was easier for an artist to make a portrait memorable than it was making a landscape memorable. So all the credit to Wood for making hills, roads, houses and fields eye catching.