Charles Darwin's grandpa, Erasmus. The real genius in the family

Erasmus Darwin (1731–1802) was born in Nottinghamshire where his father Robert Darwin was a lawyer. Presumably the family lived well because Erasmus went to university in St John’s College Cambridge, then studied medicine at the University of Edinburgh Medical School. 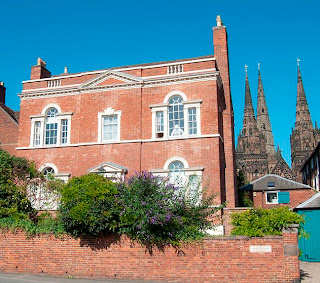 Erasmus Darwin House Museum, Lichfield
The Cathedral can be seen behind the house.

In 1757 he moved to Lichfield, Staffordshire to establish a medical practice there. Erasmus became a highly successful physician, and practiced for 50+ years. The doctor liked sex himself, with his wives, mistresses and other peoples’ girlfriends, and warmly prescribed sex as a cure for hypochondria in his patients. Perhaps that was why George III invited him to be his Royal Physician. More probably, the king was interested in Erasmus’ ideas on hygiene, mental health, balanced diet and the proper treatment of wounds.

Clearly Erasmus was far from a standard suburban GP. He was an inventor of extraordinary breadth, including a canal lift for barges and some weather monitoring machines, both of which were needed by local industry. Alas Erasmus did not patent any of his inventions, even his very clever flushing toilet. He seemed to believe that invoking patents would damage his reputation as a doctor. However his friend Matthew Boulton, another creative thinker and successful inventor, had no such scruples.

Best of all Erasmus co-founded the Lunar Society of Birmingham in 1765, a discussion group where thinking industrialists and natural philosophers could get together in an exciting environment. In 1776 he formed the Lichfield Botanical Society, translating the works of a Swedish botanist into English. The result was two, well thought out publications: A System of Vegetables (early 1780s) and The Families of Plants in 1787. 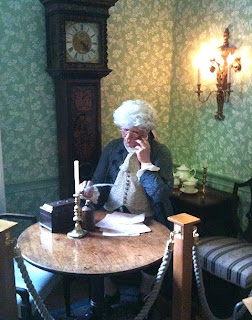 Erasmus Darwin was a very close friend of Josiah Wedgwood (1730–95), the founder of the pottery firm, Josiah Wedgwood and Sons. Josiah Wedgwood was also a prominent abolitionist so perhaps they shared a number of important values. Anyhow, so close were the two families that Josiah’s granddaughter, Emma Wedgwood, married Erasmus’ grandson, Charles Darwin. Sir Francis Galton (1822–1911) grandson of Erasmus and cousin of Charles Darwin, was another extraordinary polymath in that family.

I wonder how many people, even those who have read Charles’ Darwin’s writings, would know of grandpa Erasmus’ work? In Lichfield, Erasmus developed his system of evolution, and presumably influenced the later ideas of his grandson Charles Darwin. Remember it was Erasmus who wrote the Laws of Organic Life in 1794, dealing with with pathology, anatomy, psychology and the functioning of the body, decades before On the Origin of Species 1859!!! And I wonder how many people, who have seen Joseph Wright of Derby’s well known portrait of Erasmus, realise who the sitter was? 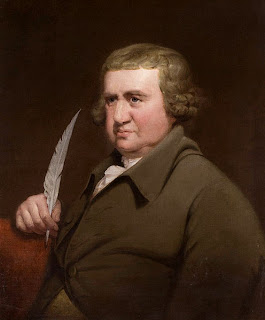 Erasmus Darwin by Joseph Wright, 76 x 64cm, c1792. Derby Museum and Art Gallery.
Dr Darwin, as you can see, was a rather large man.

Erasmus lived in, and modified a large medieval house near the cathedral close, converting it into a brick Georgian town house. It was here that his Robert Waring Darwin (1766-1848) was born, later father of the naturalist Charles Darwin. And it was this building that functioned as Erasmus’ medical practice, the laboratory for his scientific experiments and the Lunar Society’s gathering place.

In Apr 1999, the Lichfield house became a museum and visitor centre dedicated to his life’s work. Once the renovations were completed, the Erasmus Darwin House Museum was filled with his furniture, books, medical equipment and inventions.

Late in life, Erasmus moved to Derby where he formed the Derby Philosophical Society, a daughter organisation of his earlier Lunar group. 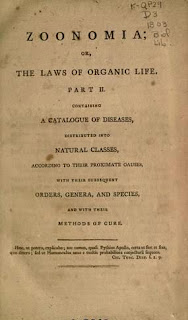 What an amazing polymath and Enlightenment thinker Dr Erasmus Darwin was.  He made major contributions to learning in 75 diverse areas which included:

Examine Jenny Uglow's book, The Lunar Men: Five Friends Whose Curiosity Changed the World. It was published by Farrar, Straus and Giroux in 2003.

What an amazing man, who few know about. Any clue about what he did in his spare time? Apart from skirt chasing.

I know Wedgwood, Boulton, Charles Darwin and Galton, but not Erasmus Darwin. In fact I can't think of any other English-speaking Erasmuses.

I don't even know how he had time to sleep every night!

His first wife, Mary, had 5 children. His second wife, Elizabeth, had 6 more children. A governess came to look after the Darwin children, and she had two more children with Erasmus. These 13 children are only the ones he acknowledged... there were others.

He couldn't keep it zipped up!

I am with you. I know more about Josiah Wedgwood than the others, sinply because he was arguably the most fabulous English ceramics designer of the era. But Erasmus Darwin was a delightful surprise to me too.

if you get to Lichfield in Staffordshire, it is well worth a visit to the Erasmus Darwin House Museum. You will love what he did to the oldfashioned architecture, and I hope you will love the contents of the house as well.

Hello Hels:
It is so strange that around that time there were, in fact, so many very prominent men, probably more so than women, living in and around the Midlands, of which Erasmus, although exceptional in so many ways, was but one.

We did not know of his house, but Lichfield Cathedral has some of the most amazing early stained glass, comparable to that to be found at Chartres.

Well written Hels. He deserves to be better known. Another friend of Darwin and Wedgewood, an amazing polymath and a member of the Lunar Society, was Joseph Priestly. These men, together with Boulton, changed the world while living in Birmingham. Have you read Jenny Uglow's wonderful The Lunar Society?

Apart from the people discussed in the post, I love the idea that Joseph Banks, James Watt, William Herschel etc had birth and death dates almost identical to Erasmus Darwin and regularly mixed with the same, talented people.

I suppose he had a specific problem in that he tackled religious problems and was run out of town a number of times by religious communities who were offended by his writing.

I haven't read the Uglow book, but I can see from the reviews that she was particularly interested in Matthew Boulton, James Watt, Josiah Wedgwood, Erasmus Darwin and Joseph Priestley. I will add this reference to the original post, many thanks.

Thanks for letting me know about the Erasmus Darwin house museum. I am a big fan of his from way back. In addition to genius, he also had wit and cleverness. One of my favorite works of his is The Loves of the Plants, in which he describes botany in terms of romantic poetry and classic allusions, such as "With charms despotic fair CHONDRILLA reigns/O'er the soft hearts of five fraternal swains."
--Road to Parnassus

Thanks for that comment. There is a King-Hele book called "Erasmus Darwin and the Romantic Poets" that suggests that Erasmus was not just a doctor-scientist writing a bit of poetry on weekends. Rather he was one of the serious English poets of the late 18th century.

"A collection of his love poems to Elizaberth Pole have survived but his best known work is The botanic garden, written in heroic couplets. Its two parts were published separately, the second part appearing the year before the first. His poetry received some ridicule at the time from critics but was admired by Samuel Taylor Coleridge, Charles Lloyd, William Wordsworth and Percy Bysshe Shelley."

Evolution was in the air long before the Beagle voyage, it was the mechanism for change that no one could find / prove.

yes indeed. It seems that various aspects of evolution were appearing and developing well before Charles Darwin. Erasmus actually translated the works of Swedish botanist Carolus Linnaeus.. you cannot get a better reference than that. But I would also include Jean-Baptiste Lamarck, Georges-Louis Leclerc and others.

The trouble was that evolutionary ideas did not necessarily endear these thinkers to the church.

Absolutely fascinating. It makes the path Charles Darwin took far less revolutionary and more a logical progression of his remarkable father... and his friends. What a house it must have been. Thanks so much for your words. They have inspired me.

Some examples on the pre-evolution work done by people before Charles Darwin:

Erasmus Darwin (1796) wrote that competition and sexual selection could cause changes in species, saying that the strongest and most active animal would propogate the species, improving it.

Lamarck's published his system of dividing invertebrate organisms according to type in 1809. Animals varied by sometimes minute degrees, so Lamarck discussed the relationships between animals AND the transmutation of species into new ones. Lamarckian evolutionism was centred on the inheritance of acquired characters - how the structure of an organism altered over generations. [The Victorian Web]

Charles Darwin saw the ways in which similar animals adapted to very different ecologies. He read AR Wallace's 1858 essay on a theory of natural selection and in 1859, published his own brilliant work on the Origin of Species by Means of Natural Selection.

I would love to think of grandpa Erasmus discussing science with grandson Charles over hot chocolate. But alas Charles was only 7 when his grandpa died.

I have bought the book and have started reading it. Thanks for guiding me to it.

The joy of Jenny Uglow is that she spreads herself around. And the book's subtitle, Five Friends Whose Curiosity Changed the World, is spot on.

As an artist myself, I enjoy reading Philip Koch's sensitive writing about Edward Hopper and Andrew Wyeth, who along with Whistler and Rothko, are my favorite American painters.
I don't live in the United States but have traveled and passed a short time there. But even with the little time spent in your beautiful country, especially in small-town America, I can relate to some of the poetical feel that Hopper and Wyeth had captured in their art, which is for me part of the attraction of their paintings.
Browsing at wahooart.com the other day, as I do now and then, I find a good selection of Edward Hopper's work, http://EN.WahooArt.com/@/EdwardHopper ,in the big archive of Western Art, that customers can order online for canvas prints and even hand-painted, oil-painting reproductions can be made and sent to them.
Hopper's surrealistic and depersonalized world is there again. Timeless, yes, as it is still there now in the roadside cafes and diners that I ate at all over America.

My beautiful country is Australia :) Did you mean to send this comment to me?

By the way, I largely agree about your art assessments.

Thomas Day (1748–89) was a British author, abolitionist, children's writer and Rousseauvian. Plus he was one of the 14 men who attended Lunar Society meetings regularly.

Read the blog The Resident Judge of Port Phillip about Thomas Day and his Lunar Society friends.