It is a truism to say that the first half of the C20th witnessed some of the most destructive and yet creative decades in Europe’s history. These were eventful and brutal years! But they were also exciting times for artists, with the inter-war generation responding to changing social, political and religious values, as well as responding to the Empire’s military exigencies.

Two British art galleries have just held special exhibitions that a] examined the nation’s response to tough financial times and b] went some way to display the spiritual quality of landscapes. 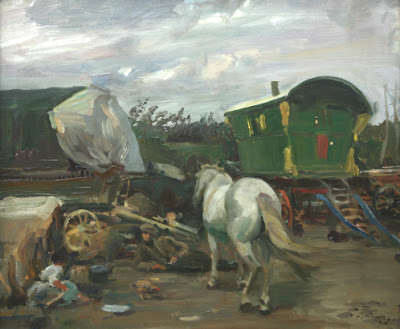 As Richard Moss noted, Cornwall’s pleasant climate offered the chance to capture the local landscape in impressionist paintings which relished bold colour and highly visible brushstrokes, both before and after WW1. The artists were soon producing boat and harbour scenes around Falmouth Bay, a place that captured the frailty of the English sun and the way it played upon the sea.

Together with scenes of pastoral and coastal harmony, the everyday figurative elements of Cornish Impressionism were shown in works such as The Caravan by Alfred Munnings c1910 and Abbey Slip by Stanhope Forbes 1921. Hazy, romantic and harmonious – with hindsight, interesting responses to a time of rapid social change and war. 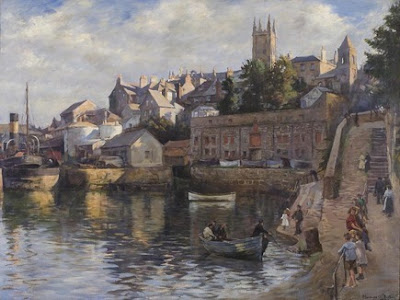 Restless Times, Art in Britain 1914-45 was curated by Museums Sheffield as part of the Great British Art Debate. After Norwich Castle Museum, the exhibition moved to Tate Britain where it stayed open to the public until Nov 2011.

The exhibition told the story of what would become a turning point in the history of Modern British Art. Again with hindsight, the inter-war era was a period defined by the devastating experience of two world wars, an era that saw fundamental changes in British society. During the mass upheavals, Britain became a destination for displaced people from across Europe. This migration brought foreign artists from across the continent and with them, an influx of new and influential ideas.

Exploring the impact of this remarkable cultural exchange, Restless Times considered how artists sought to redefine the changing face of the nation -  from the horrific impact of war and a retreat from the harsh realities of life, to the celebration of the pastoral idyll and the embracing of new ideas and technologies. The exhibition examined how artists engaged with both the uncertainties and possibilities of the time, especially Paul Nash, Eric Ravilious, Barbara Hepworth, Cyril Power, Percy Wyndham Lewis, Christopher Nevinson, Vanessa Bell and Henry Moore.

Following my previous post on Inter-war landscapes in general and the South Downs in particular, I was delighted to see The Cornfield painted by John Nash in 1918. The Tate said that The Cornfield was the first painting he made after WWW1 which did not depict the subject of war. 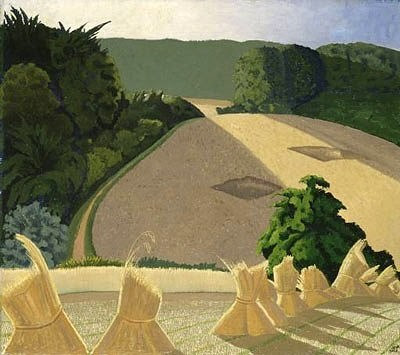 In its ordered view of the landscape and geometric treatment of the corn stooks, The Cornfield  prefigured his brother Paul's landscapes. As That’s How The Light Gets In explained, John and his brother Paul used to paint for their own pleasure only after 6 PM, when their work as war artists was over for the day. Hence the long shadows cast by the evening sun across the field in the centre of the painting. It is difficult to remember that The Cornfield was painted as early as 1918 – a full decade or more before by South Downs landscape artists were painting in a similar style. 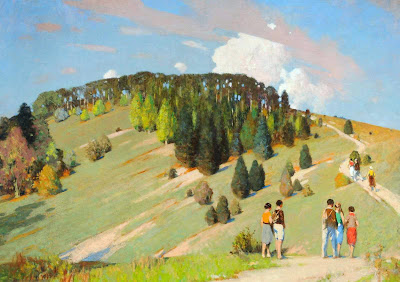 Hikers at Goodwood Downs, by George Henry (1858-1943), dated from the 1930s and showed ramblers enjoying Goodwood Downs in West Sussex. Rambling was a fashionable pastime during the 1930s, particularly amongst the working classes, since the activity was both free and health-giving. At weekends hundreds of walkers would leave the city to explore their rural surroundings. The Restless Times exhibition was showing that art and social history were almost indistinguishable. 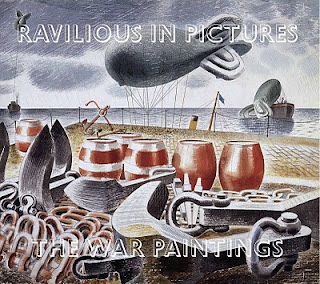 Readers might like to locate the book Ravilious in Pictures: The War Paintings 2011. Written by James Russell and published by The Mainstone Press, the book celebrated and commemorated the wartime career of Eric Ravilious, until he tragically died in 1942. The images created a vivid portrait of life in the wartime Britain, including coastal defences, observation posts and rolling countryside filled with the detritus of war.

Eric Ravilious: Artist and Designer was written by Alan Powers and published by Lund Humphries in 2013. Powers already examined the design revolution that took place in the early C20th led by our favourite artists eg Paul Nash and Eric Ravilious. In this book Powers examines Ravilious' cool colours, pure style and classical decorum that jumped off the canvas and into popular taste. Ravilious' chalk downs and other landscapes evoke a sense of the sublime, rare in modern art but sustained 70+ years after the artist's death.

During the early C20th, the remote hamlet of Lamorna in West Cornwall attracted a fine list of leading artists, including artists like John Noble Barlow, Alfred Munnings, Laura Knight, Harold Knight, Charles and Ella Naper, Augustus John and many others. The early Lamorna Group was one of the most important creative episodes in British art, but it was also beset with jealousy and tragedy, as told in a very fine novel,  Summer in February by Johnathan Smith. The Group effectively dispersed by the end of the Great War.

Now there is an art exhibition called Summer in February - Art in Lamorna 1910 - 1914 which will remain open until June 2013 at Penlee House, Penzance. 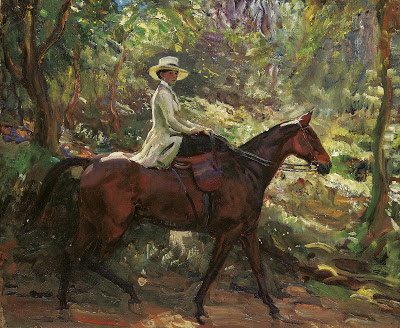 
A student at the Forbes School of Painting, Florence met the charismatic Alfred Munnings in Newlyn and they married in 1912, but their disastrous marriage ended in 1914 with her suicide. Munnings' painting, The Morning Ride 1913, is on display at the Summer in February exhibition. This beautiful painting, one of four he painted of Florence, seems to have predicted the sporting portraits that people came to love.

That's an unusual Munnings; usually I associate his work with the lives of the upper classes. I particularly enjoy John Nash's work.

Read the Ravilous book and very good it is too. Munnings was a strange character in British Art but on BBC Paintings he is one of the most popular. Not particularly my taste, I prefer Laura Knight, but interesting to see him actually exhibited. These were good exhibitions.

Happy 2012! I wanted to choose a pre-war Munnings that depicted pastoral normalcy and harmony. "Wending Home" 1905 or "Washing a Cut" 1912 would have done just as well.

To find a John Nash painting that celebrated peace and harmony was a bit harder to find just after WW1, but well worth pursuing. I suppose people know his brother Paul better.

I loved reading James Russell's "Ravilious in Pictures: Sussex and the Downs" when it first came out in 2009. It was quite a revelation to me.

So although the two exhibitions closed down at the end of 2011, I was pleased to add the recently published book "Ravilious in Pictures: The War Paintings" 2011. What a tragic, young and wasteful death :(

I just wish one or both of these two exhibitions comes to an Australian gallery. In my lifetime ... would be good!

The Cornfield is stunning - actually took my breath away a little.

How the world changes - could the sentence - about painting for their own pleasure after 6pm when their day as war painters was over - be said of anyone, anywhere today?

Some of John Nash's landscapes were very bulked up, almost on steroids. Have a look at "Norfolk Coast", "Cornfield at Wiston-by-Nayland Suffolk", "The Barn at Wormingford" and "The Flooded Meadow". I love them too.

I just found another Munnings that is far from the upper class, horse racing set that he seemed to love.

Like "The Caravan", "An ancient rebel" c1905 seems to be about horse dealers, gypsies and travelling fairs. It is colourful and action-packed, but definitely not elegant.

Quite amazing works, some of which I am not familiar with, Hels. It's a pleasure to see them here and use your post as a springboard for further investigations...

I hope that 2012 is full of health and happiness for you and your family!

I also use the exhibitions as a springboard for further investigations :) Until a couple of years ago, I would have assumed my knowledge of, and love for paintings ended in the trenches of 1914.

Any works that closely link art and social history should grab our attention.

I have added a reference to the art exhibition called "Summer in February - Art in Lamorna 1910 - 1914" which will remain open until June 2013 at Penlee House, Penzance.

This exhibition brings together paintings by the artists working around the Lamorna Valley pre-WW1, together with sensitive photographic and written records.

The artists were soon producing boat and harbour scenes around Falmouth Bay, a place that captured the frailty of the English sun and the way it played upon the sea. Beautiful and appreciable art work. I really impress to your art blog.

I love those boat and harbour scenes. There is something magical about living next to water, but if that is impossible, the next best thing is to own a harbour based painting.

"Brothers in Art" reunited the work of John and Paul Nash. It showed 40 paintings, watercolours and drawings from public and private collections, providing an opportunity to view the siblings’ work side-by-side, explored within the powerful context of conflict and memory.

The exhibition began with the brothers’ joint exhibition at the Dorien Leigh Gallery, London in November 1913.

A book of the same title is available from the gallery.

Thank you. I imagine the Nash brothers did not enjoy the inevitable comparisons. Both had their individual contributions to make.

Paul Nash was fascinated with Britain’s ancient past and spent time in southern England exploring the downs and coastal areas. Equally inspired by the equinox and the phases of the moon, he used all these influences in his work, interpreting his environment according to a unique, personal mythology, evolving throughout his career.

Featuring a lifetime’s work from his earliest drawings through to his iconic Second World War paintings, this exhibition (October 2016 - March 2017) reveals Nash’s importance to British modern art in the most significant show of his work for a generation.