The High Line, New York: an urban park in the sky

The High Line was built under an agreement between the New York Central Railroad, New York State and New York City, to elevate dangerous and congesting railroad traffic ABOVE city streets. It was used to transport freight along the Westside waterfront, replacing the street-level tracks at 10th and 11th Aves. Built in 1929 at a cost of $150 million ($2 billion today), it originally stretched from 35th Street to St. John's Park Terminal, now the Holland Tunnel rotary. It mostly ran mid-block, designed to avoid dominating an avenue with an elevated platform. The warehouses and markets in the Meatpacking District were major users of the freight line. 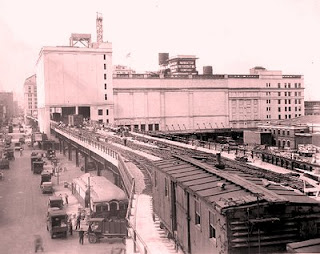 The viaduct was raised off the ground in 1929, to serve the Meat Packing District

Actually The High Line was part of the larger solution, known as the West Side Improvement Project, which was completed in 1934. The West Side Improvement Project, which included the construction of the Henry Hudson Parkway, stretched for 21 ks; it extended from the  Riverdale section of the Bronx at its northern edge... to Spring Street at the south. It eliminated 105 street crossings, added 32 acres to Riverside Park, and brought food and merchandise into the city.

The rise of trucking in the 1950s led to a drop in rail freight on the High Line, and in the 1960s, the southernmost portion was torn down. The final train carried freight down the High Line in 1980. In 1993, more of the viaduct, between Bank and Little West 12th Sts, was demolished.

Although the elevated structure is basically sound, the abandoned 3 ks stretch of railroad viaduct was ugly and overgrown with weeds. Worse, it was accessible only to those who risked life and limb, trespassing on Railroad property. It was mostly forgotten, except by architects, conservationists and neighbours who were mesmerised by its solitude and wild quality.

In 1999 the Giuliani administration signed an agreement joining the property owners’ move to DEMOLISH the rusting and ugly High Line. So a community-based group, Friends of the High Line, immediately got itself established. Locals Robert Hammond and Joshua David created plans to turn the High Line into an elevated park or greenway, similar to an unused rail viaduct in Paris’ 12th arrondissement that became the Promenade Plantée. The Municipal Art Society, American Institute of Architects, the Society for Industrial Archaeology, the New York chapters of the American Planning Association and the American Institute of Architects also urged preservation. 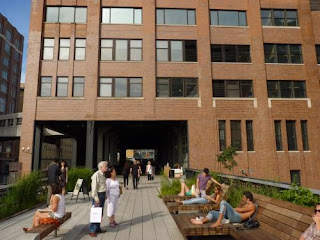 Sunbaking in the greenery, just next to where High Line meanders through Chelsea Market

In 2004, the New York City government committed $50 million to establish the proposed park. A design competition was conducted, attracting 720 entries from 36 countries, and in July 2004 the four finalists’ proposals went on display at the Centre for Architecture on LaGuardia Place in Greenwich Village. The semi finalists included plans for all sorts of facilities - high-flying pools, wetlands, outdoor art projects, bicycle paths and nature trails.

At places where the High Line went through buildings, like the former National Biscuit Company building that is now the Chelsea Market, the decision-makers were open to commercial uses for the High Line. This was presumably to generate income to maintain the project.

In April 2006, Mayor Michael Bloomberg presided over a groundbreaking ceremony, marking the beginning of construction on the High Line project. By early 2007, most of the old rail tracks had been removed, making way for the elevated park.

By mid 2008 a natural oasis was created in an urban city. This southern section included five access stairways and three elevators. A hotel developer built The Standard Hotel,  straddling the High Line at Little West 12th St. The Gansevoort Street terminus at the south end of the High Line was considered for a new museum by a number of organisations. 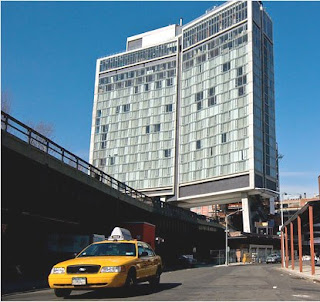 In June 2011 another ribbon cutting ceremony to open the High Line's second section, from 20th Street to 30th Street, was held. This time the mayor, politicians and dignitaries were all there.

The High Line Channel features art films and videos, including historic works, new productions and curated series. During the High Line’s regular operating hours, the Channel can be viewed from the Seating Steps at West 22nd St.

Having a 22-block elevated urban park that connected neighbourhoods and provided a special sense of place… was a unique and transformative public experience. I actually believe it was a radical demonstration of people-power and local planning. What an interesting premise - that an open space can be at the heart of neighbourhood revitalisation.

Can there be further growth in the future? Of course. Someone may be inspired to built a beach on the High Line, or a golf course, or a music bowl. Architect Steven Holl hopes one day to make the High Line part of a green loop, connected to the new Hudson River Park by a series of pedestrian bridges that would soar above the fierce traffic of West Street. The sky is the limit! 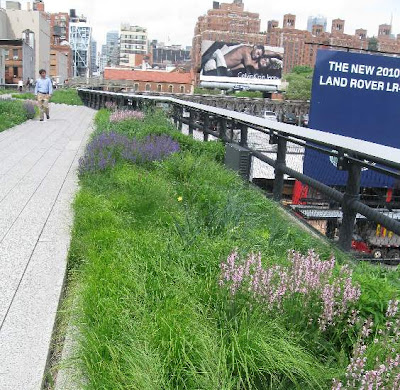 The sense of wild plants has been maintained

And High Line has had important financial considerations as well. Like the Promenade Plantée in Paris, High Line has spurred the construction of domestic and commercial buildings in the surrounding area. 8000 construction jobs were created on High Line itself, and many more on other neighbourhood developments. Two million people a year visit the structure, half of them tourists. Needless to say, citizens in other American cities are now looking very carefully at their own rusty, industrial hulks.

I wonder what the atmosphere feels like? Are you still aware of the heavy traffic below? Does the air feel fresh and a little cooler because of the greenery?

Thanks for showing a successful urban renewal project in New York. My children have loved going up there.

Andrew
I don't imagine it is cooler or fresher on The High Line, but it would certainly be cleaner, more relaxed, less crowded and more "park like" than on the city streets below.

I don't suppose The High Line will ever be Central Park, but then the Friends of the High Line were never going for a second Central Park. So within the parameters the city was given, they did a fantastic job.

The good burghers of St Louis saw that your urban renewal project was doable, and created their own in response - St Louis's Citygarden

"I actually believe it was a radical demonstration of people-power and local planning. "

They have tried to do something similar but nothing like so ambitious with the monorail in Docklands. Another thought provoking post. Here's to many more of them in 2012.

Helen,
Ever since I heard about this project I've wanted to visit it. So last time I was in NY I did some research and found out it was due to open a month after I left. So it is just about top of my list for the next time ... there will be a next time won't there!

people become very disheartened. Project after project has failed, because developers destroy old properties or because state governments can't get their act together.

Here is evidence that when enough people and enough money back some piece of urban renewal, it can happen.

the trouble with long term projects is that they are sooooo long. From the time the community-based group, Friends of the High Line, started planning in 1999 until the first visitors were allowed aboard in 2009, you might have made many trips to New York.

In any case, changes and additions will continue to happen to The High Line. So any time will be a good time to visit. The sooner the better :)

It is more peaceful up there... there are actually water features on the walkway and those are terribly soothing to listen to (when you can) and observe. People sit on the wooden seats and relax. I think it's hugely successful.

oh agreed. The sound of water is always a delight.

I have three first cousins who are New York born and bred, who love the High Line. Probably people who saw the rusty, ugly, weed-filled stretch of railroad viaduct, every day, appreciate the new space even more than an outsider like me.

A word of warning. Any such structure may add something very desirable, but it can ruin an area underneath it that is larger than itself. The El would do this by turning it into a gloomy, sun blocked structure with posts and beams, creating areas that might great for crime. It's no coincidence that the 1930s crime movies take place underneath the Els.

Very wise advice. If a raised viaduct is going to be built - consider the total environment, not just the top.

I realise the High Line was built 80 years ago. But when it was going to be renovated from 2004 on, was the underside seen as problematic at all?

I'm with David - I'd love to visit the High Line too!

Thanks for this interesting story.

In case anyone has not seen it, there is an excellent pictorial of the High Line in the April 2011 National Geographic Magazine.

foto
they are super photos, thank you. I will add a reference straight away.

And look at the flow-on effect. "The Caledonia, with its walls of glass, is one of many apartment houses newly constructed along the High Line." I had no idea that people would flock to live in flats overlooking the new "park".

Hi, i think that i saw you visited my website so i came to “return the favor”.I'm trying to find things
to improve my web site!I suppose its ok to
use a few of your ideas!!

Read an extract from "On the High Line: Exploring America's Most Original Urban Park" by Annik LaFarge and Rick Darke (Thames & Hudson 2012).

Since you published this post, it has been a real pleasure enjoying the warm weather in open air coffee shops on the High Line. Plus the parklike qualities of the space have filled out, with trees and grasses.

Time for you to visit us again. Soon.

Whenever a building under construction flanking the High Line hits a certain height, the developer is required to put up a shed over the park, for safety reasons. These are always of the usual scaffolding variety that you see everywhere... except, it seems, when it's for a building by Pritzker and Stirling Prize winning architect Zaha Hadid. Her Allongé is a 112-foot long sculptural installation designed to give a sneak preview of the swooping forms of her building.

thank you. You say the aesthetic part of pedestrian tunnel is made of a heavy silvery fabric, a 112-foot long sculptural installation. Was it always going to be temporary or did the architect hope that her sculptural element might be a permanent part of High Line?