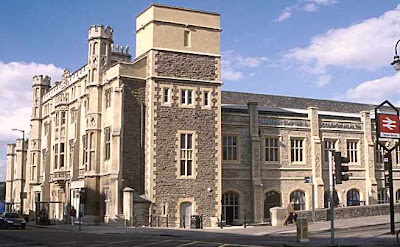 The terminus included the passenger shed and the adjoining engine and carriage shed. It was 67 m long with timber and iron roof spans of 22 m. Even so, it had to accommodate an increasing number of trains, so the station was expanded firstly in the 1870s and again in the 1930s.

Sadly Brunel's terminus is no longer part of the operational station, closing in 1965. The architectural and historical significance of the station has been Grade 1 protected. Fortunately The British Empire & Commonwealth Museum opened in the old railway station in 2002, following expensive and extensive renovation (£8 million).

Its role was to explore the history of the British Empire and the effect of British colonial rule on the rest of the world. It aimed at presenting an even-handed version of imperial history, rather than automatically condemning or automatically glorifying the empire. This was probably an impossible goal, but it was always good to see left wing and right wing historians equally offended. 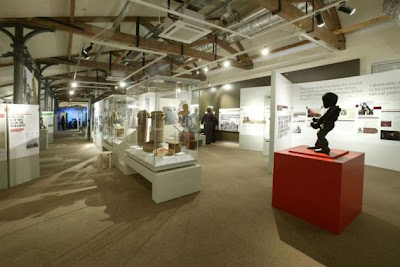 20 galleries packed with interactive exhibits told the story of the biggest empire the world has ever known. The museum had a good publications department, producing books on colonial life, and a register of titles of the regiments of the Honourable East India Company and East Indian Armies. And there was a collection of artefacts of the Commonwealth Institute; extensive archives for photographs, works on paper and historical films, and a costume collection.

The museum was also the home of an epic tapestry. The New World Tapestry was the largest stitched embroidery in the world, larger than the Bayeux Tapestry. It depicted English colonisation projects in Newfoundland, North America, the Guyanas and Bermuda between 1583-1642, when the English Civil War began. The 24 panels of the tapestry extended for 81.3 m in length and were 1.2 m high. It took from 1980 to 2000 to be completed. 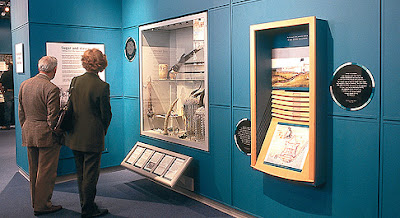 The exhibition started with John Cabot’s first expedition in 1497 and continued until modern times. My favourite section was, naturally enough for an Australian, The Rise of Victoria's Empire (1800-1900). These galleries focused on the story of the Victorian empire, asking how Britain expanded and controlled its empire, how did Britain's empire work during the 19th century, who benefited from it, who left Britain to live or work abroad, and what did it feel like to live under British rule? Regarding Australia, for example, there were individual accounts of convicts transported to Australian penal settlements. And there was an attempt at measuring the impact of colonisation on Australia’s original inhabitants.

On the day I visited the Bristol Museum, our group included colleagues from Canada, New Zealand and South Africa who enjoyed the quality of the historical material, but we did not have any historians from the sub-continent, Singapore, Hong Kong or the West Indies. I wonder if the two groups would have reacted differently.

The passenger shed, mentioned above as being right next to the railway station, was not wasted. It was one of the largest performance venues in the South West.

Sadly for history minded visitors, the museum announced it would be closing up and moving to London in 2008. What a shame. Bristol was a great site for the museum, given its key role as a major port in centuries past. Bristol was a transit point for international trade, including the transatlantic slave trade which was abolished in 1807.  And the old Brunel railway station provided a perfect exhibition space. 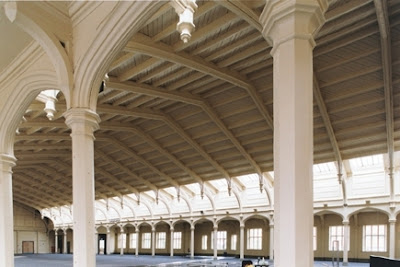 But the move did not take place as planned and it has since been announced that the planned move to London will not be completed until 2012. What has happened to all the displays, loaned objects and visitors? Can’t another site be used, until the final installation in London has been completed?

In the meantime, The M Shed is a different Bristol museum that opened in July 2011. Bristol museums seem to be a movable feast. The new project is located in a dockside transit shed that was previously occupied by the Bristol Industrial Museum. It is chockablock full of Bristol artefacts and images, showing Bristol's role in the slave trade and exhibits on transport, the arts and local citizens. And outside the shed, moored in the docks, is a collection of historic vessels. The conversion will eventually cost a cool £27 m. 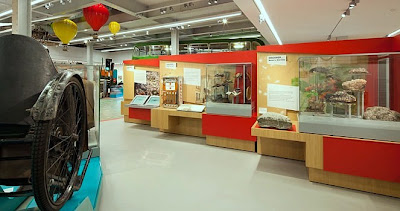 I wouldn’t have added the Cornwall Maritime Museum into a discussion of Bristol, Brunel and and British Empire history, except for one link. The Falmouth museum put on lectures about Brunel the great engineer and the construction of his important ships and their legacy.

Hels, the gate was originally built in 1873 as the main southern entrance to The Domain. It was moved during the construction of the Cahill Expressway to its present position and became known as the Wooloomooloo Gate because it overlooks that suburb.

I agree that it is a pity displacing the museum to London. What will then happen to the building?
The Orsay Museum in Paris has a similar story in the sense that it used to be a railway station. Fortunately it escaped demolition in the 1980's as the president of the time was keen on the architecture of the early 1900's!

Thank you. We need to preserve our Victorian heritage - or there won't be much of it left.

I had forgotten the d'Orsay, another great example. Imagine if a] Paris had pulled the building down or b] left it to moulder, unused and unloved. Vandals would be in there, in a heartbeat.

I wonder if there are any plans for Brunel's Bristol architecture.

Thank you Hels for a fascinating post on the Bristol museum. To begin with, the scale of the building was truly visionary for a rail terminal built in 1840--that it remained in use for a century and a quarter, remarkable. That it served as a museum for only six years is also remarkable, and that its 'imperial' contents are headed to London is deeply ironic, but clearly the decision has everything to do with the 2012 Olympic games.
Here in France they've been trying for decades to encourage cultural growth outside Paris, and such a "coals to Newcastle" move would doubtless incite quite a debate today.

because the museum announced it would be closing up and moving to London way back in 2008, I had totally forgotten about any possible connection to the Olympic Games and to the millions of tourists flooding into London. Nod.

But even if the Olympic Games were on Londoners' minds, it seems heartbreaking to:
-preserve a great railway station in Bristol,
-pour £8 million renovating it up to museum standard,
-curate and display excellent historical material for a few years, and
-attract us old colonials by the thousands to visit. Then close.

I realise there were legal issues with the artefacts, but that could have been sorted in court, without the closing the entire British Empire and Commonwealth Museum down!

"On 16 March 2011, the Museums Association announced that the Director of the museum, Mr Gareth Griffiths, had been dismissed pending a police investigation into the unauthorised disposal of museum object."

There is a very mixed feeling in Bristol (at least going by Radio Wiltshire phone in's) on their history in this area.

As your reference described, Commonwealth Online now offers curriculum-linked packages to inspire teachers and students to discover our shared history of Empire and Commonwealth. I think the idea is brilliant and if I was teaching in a high school, I would grab hold of the resource immediately.

But I would also want the students to immerse themselves in the physical museum. For example, in the National Wool Museum in Geelong, the school students sat in an old shearers' shed where the men had eaten, slept and socialised. The students couldn't believe how tiny and primitive the shearers' "home" had been.

This is hands-on learning!

I live in Bristol and I did visit the museum once and it was fascinating, especially to find out more about Bristol's slave trade. However, the new M-shed museum has recently opened in the docks as a new museum for the history of Bristol. I'm not sure if any of the old museum's exhibits went to the M-shed but I would hope so. http://mshed.org/

Thank you! I loved what your reference said about the Industrial Museum having been the key attraction on Bristol’s harbourside for 32 years. I also take note of the M Shed's galleries:
◦Transport
◦Aviation
◦Port of Bristol
◦Print and Pack
◦Transatlantic Slavery

So perhaps some of the The British Empire and Commonwealth Museum's exhibits did indeed go to the M Shed. I hope so.

Brunel this, Brunel that. Was the man a living god? It is hard to read anything about England's trains without him being mentioned. I should actually find out more about him soon

Brunel was a bloody good engineer, especially regarding tunnels, bridges, dockyards, steamships and railway projects. But I suppose his legacy is strongest where his architecture was particularly over the top.

Nothing wrong with Brunel's Swindon railway works either. Or Paddington station.

If only he had adopted the standard gauge though - it caused problems until about 1892.

One of the sentences I wrote about the Tasmanian railways was that there were constant construction crises, scandals, bitter rivalries and endless financial problems.

I have no doubt that the gauge problem in Britain could have been sorted out over a glass of beer, if the Big Egos were not constantly clashing heads. Even the great Brunel was not exempt from rivalries.

Heavens above... in a narrow country like Britain, they couldn't even coordinate the railway clocks!

There is a good tale about one Brunel's tunnels. I will write a post about it.

does it involve scandal? I hope so :) I would love it if you could create a link to this Bristol story, when you have written your post.

Thanks for sharing Bristol, Brunel and British Empire history.

I have now added a description and photo of the newly opened M Shed. I cannot find if the The British Empire and Commonwealth Museum material went to M Shed, but possibly not. They seem to have different material to exhibit.

I have added an important link between The National Maritime Museum of Cornwall in Falmouth, Brunel, engineering and shipping.