I have ranted and raved about asylum seekers and refugees who desperately try to escape the death and destruction in their own countries by coming on small boats to Australia. It strikes me as barbaric to allow the boats to sink, send the refugees back to the hell holes they escaped from or imprison them on small Pacific islands.

Australia’s current policy became even more embarrassing when looking at the play Café Scheherazade, adapted by Therese Radic from the novel by Arnold Zable. The play is showing at fortyfivedownstairs in Melbourne and although there aren’t too many Holocaust survivors still alive, there are plenty of their children and grandchildren who were born from 1946 on. fortyfivedownstairs was packed. 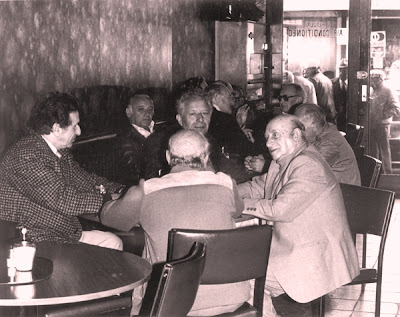 After the war, a young couple called Avram and Masha Zeleznikow returned to Poland, found each other, got married and agreed to meet up in Paris. They chose to meet in a Parisian café named after the storyteller Queen Scheherazade who apparently told stories for 1001 nights to save her life. The name seemed appropriate since the Paris café was filled with refugees from Eastern Europe, sharing the stories, looking for any distant cousin who might have survived the Holocaust and eating cheesecake.

When they arrived in Australia in the 1950s, the Zeleznikows opened their own cafe in 1958 and of course they called it Café Scheherazade. They and their Eastern European patrons spent endless hours in Acland Street St.Kilda, recounting their own experiences as hunted enemy aliens in Poland and as refugees in the new country.

The play Café Scheherazade uses the device of Eastern European migrants in Melbourne telling their stories to a young journalist. The journalist wants to get down the details for a book; the café patrons just want to remember their journeys and their experiences of displacement and survival. There is nothing unique about this – I am certain the Afghanastani and Iraqi refugees are in the same position in 2011 that the Jews were in 1951. Refugee lives face universal problems, whether they analyse the issues in Yiddish, Polish, Russian, Arabic or Uzbek.

For people who love klezmer music, the music was evocative of a time well and truly gone. From the moment Ernie Gruner struck up his violin, Arnold Zable noted, the theatre audience was back in the café. Back in Acland Street. Back on the roads of Siberia, the forests of Lithuania, the crowded streets of war-torn Shanghai, the back alleys of Kazakhstan or the streets of Warsaw.

The original Café Scheherazade in St Kilda was indeed an Acland Street icon. Throughout the 1958-70 era, my family joined thousands of others on Sunday afternoons enjoying beetroot borscht with sour cream, potato latkes with sour cream, cheese cake with sour cream, and black tea with lemon slices. Then we would walk to the beach (4 minutes away) for some vigorous exercise. 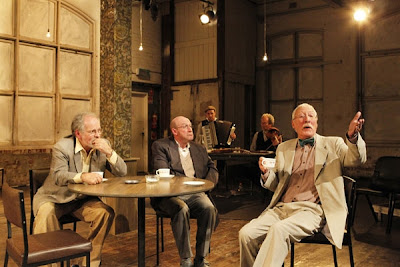 But not just an icon - I should call Cafe Scheherazade a haven. The play reminds us to celebrate and embrace those refugees who continue to arrive in Australia, because they are the future of this nation. They provide workers for our industries, chefs, artists and musicians, teachers and historians, as well as contributing to the rich diversity of this culture.

Hello Helen:
We too totally deplore the attitude of governments around the world to the current refugee crises. The British Government included.

Thanks for this lesson in recent history. Unfortunately it seems necessary.

There is something seriously the matter. People are being killed endlessly, for thinking believing or behaving in the wrong way. Governments wipe out their opposition in a heart beat. Muammar Gaddafi said he will waste every last drop of Libyan blood to retain power. What more do we, in the West, need to know?

and not even old history. I well remember the boat loads arriving in Melbourne in the early 50s, filled with refugees of my parents' generation, holding the hands of children my age.

My parents were in Australia during the war and survived. My husband's family was in Europe and 95% of them were slaughtered.

welcome to my blog! Actually I feel privileged - I saw the number of blogs you follow. It must just about be a world record.

I am a Melbournian. Why do you think Acland St was such a success as a safe haven for refugees? I don't think it is now.

Several fascinating videos on Youtube and Vimeo. In the UK most of us are ultimately immigrants from one time or other - everyone has the right to a decent life and having a chance to fulfil their potential.

I suppose The Village Belle, as we used to call Acland St, was the only part of Australia that looked even remotely Viennese - lots of little Eastern European cake shops and tiny coffee tables out on the footpaths.

But in the end, it was where Yiddish, Polish and German-speaking refugees could feel they had a home. Most refugees lived in pretty crappy boarding houses, when they first got off the boat.

You are quite correct - in safe havens in the Old World, and in most of the New World.

The possibilities are
a] an entire community is expelled eg half a million Protestant Huguenots from France.
b] an entire community is targeted for destruction within their own country eg 3 million Jews in Poland (90%) or
c] life is so deplorable for everyone that people feel they cannot protect their children's lives eg during the Iran-Iraq War.

Some new arrivals are not refugees of course and can be processed by our governments in the normal way. I am only discussing refugees.

The same thing happens here in Canada; a country populated by immigrants goes to great lengths to stop new immigrants from seeking asylum in our country. As an immigrant myself, it disgusts me.

I was talking to some Australians about making life less miserable for asylum seekers when one woman, a refugee herself in 1952, indicated she didn't want more refos entering the country. I was gobsmacked and said "but you were a refugee yourself". "Ah yes" she said, "but we were a better quality of refugee!"

Sorry, my comment is 7 years late, but I just wanted to mention that the photo of Scheherazade is not from 1950. For starters, it didn't open until 1958, but the Diner's club logo and air conditioned sign on the front door lead me to believe it's more likely the late 60s or 70s.

you are quite right of course. As I wrote in the post itself, Café Scheherazade did not open until 1958.

My beloved parents married at the same time as Avram and Masha Zeleznikow, and were equally struggling for money. So they became great mates :)