The Art, Love and Life: Ethel Carrick and E Phillips Fox exhibition will continue in the Queensland Art Gallery until 7th August 2011, focusing on an important art marriage. By the turn of the 20th century, their two careers were developing nicely so there is plenty to see. The exhibition uses their paintings to analyse life and society, from bustling urban life, to more peaceful views of family life.

Ethel Carrick (1872–1952) was born near London and studied at the Slade School of Fine Art in London. She became fascinated by the work of Monet and Pissarro, and produced impressionist views which were shown at London’s Royal Academy. Born in Melbourne, Emanuel Phillips Fox (1865–1915) studied art at the National Gallery School in Melbourne. He moved to Paris in 1887 to learn at the Academie Julian and the Fine Arts School with the masters, and was lucky enough to study under the incomparable French artist Gerome. 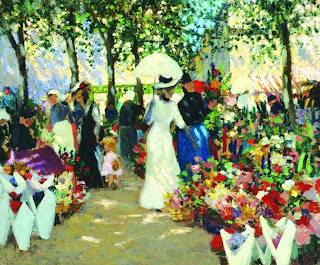 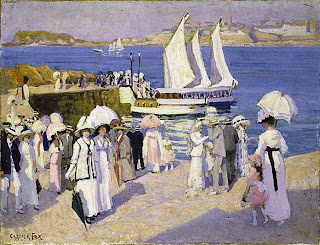 So how did they meet? Carrick went to the artists’ colony in St Ives in Cornwall where she met Phillips Fox in 1901. Carrick was fortunate in her choice of husbands since Phillips Fox was already sensitive to women and family life. And once they married in 1905, they settled in Paris where he produced gentle, romantic domestic scenes of women and domestic scenes. And he supported her work as well.

They were not just contemporaries who happened to work in art together. As a married couple, they travelled, ate, painted and slept together, in the centre of Paris until 1913 and then through Europe, North Africa and lastly Australia. The more colourful and exotic the material, the happier they were.

Carrick and Fox’s works celebrated a way of life that was leisured and elegant. They loved the life themselves and Edwardian audiences (loosely 1895-1915) also loved painted beach scenes, picnics and family meals al fresco. The gallery believes that Phillips Fox’s Al Fresco 1905 and Carrick Fox’s Manly Beach 1913, in particular, show how inviting French and Australian beach culture was.

In one sense, the leisured life was not particularly nationalist or specifically Australian in taste. That should not sur­p­rise us. Phillips Fox left Australia in 1887, before the inspirat­ion of the Box Hill and Heidelberg artists’ camps had developed. And he was outside Australia during all the national­ist excitem­ent leading up to Federat­ion. If we had to compare Phillip Fox to anyone, we could best com­p­are the subject matter with that of Mary Cassatt, Auguste Renoir and Berthe Morisot. His long white Ed­wardian dresses exactly capt­ur­ed the light and atmosphere of a summer's day. You can smell the fresh summer grass in all the paintings and feel the dap­p­led sun on the women’s dres­ses. Str­o­k­es of light filled colour flitted on the canvas surface. 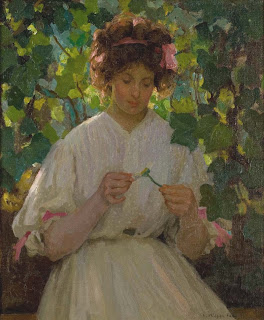 As well as creating their own beautiful works, the couple certainly participated actively in the art scene in Australia. Fox helped establish the Melbourne School of Art in 1893, and continued to teach and support Australian artists throughout his own career. When Phillips Fox passed away in 1915 at a young age, his wife continued to carry on his legacy, promoting her late husband’s work. Unfortunately that meant that his works became very well known in Australia; her works slipped into relative obscurity.

Read the essays in Art, Love and Life: Ethel Carrick and E Phillips Fox, the beautifully illustrated 224 page colour catalogue that accompanied the exhibition. The essays analyse some 100 works assembled from galleries and private collections across Australia. There is no better way to explore the life and times of the Phillips Fox family.

Hello Helen:
Apart from the early death of E. Phillips Fox, and thus the work of Ethel Carrick becoming relatively obscure, this post suggests an idyllic partnership between two people with a shared passion and a lifetime's interest in painting and the arts. The exhibition of their work is, we imagine, well worth visiting for all those who have the opportunity.

It's on my list of things to do when I am next in Brisbane, Helen! I really E. Phillips Fox's work, but it is a pity that Ethel Carrick's oeuvre is unjustly less well-known.
Let's hope this exhibition will bring her work the attention it deserves.

they were soul mates, romantically and artistically. I am sure Edwardian husbands loved their wives, but I am certain that Emanuel also respected and valued his wife.

It is a shame that Ethel's work was largely unrecognised until 20 years ago. In what seems like a general lack of interest in women's art, some of her unsigned works had been attributed to E Phillips Fox. Or worse still, some blinkered art historians suggested her signed works were probably painted by her husband and then signed by herself after his death.

The National Gallery of Australia exhibition and catalogue called The Edwardians: Secrets and Desires (2004) went a long way to righting the injustice.

I saw some Phillips Fox paintings at Castlemaine. Big, romsntic and tender, but not very politically aware.

I really like their works - the St Ives and Newlyn colonies were such an important centre for some wonderful art. Must find that book. Thanks again Helen.

Just to add that as an example of a number of 'art marraiges', the de Morgans and the Stillman's always interested me.

the painting that stands out in the Castlemaine Gallery is Phillips Fox's The Bathing Hour 1909. This is a very tender view of the mother-child relationship, set amongst other families having fun on the beach.

But you are right about no/little comment about the world around. Despite the horrors of the Boer War, the struggle of the workers for proper pay and working conditions, the struggle for female suffrage etc, most Edwardian artists seemed to be more engaged in clothing, music, ballet, family relationships, sports and leisure time activities.

I hadn't thought about it, but there was something special about art marriages, agreed. Evelyn Pickering De Morgan and William De Morgan made a very happy and creative partnership, as did Sonia Terk Delaunay and Robert Delaunay.

It is interesting that in the Phillips Fox, De Morgan and Delaunay marriages, they chose not to have or could not have children. I wonder if that freed the women up from household drudgery and allowed full expression of their talent in the arts.

I don't know that either Carrick or Phillips Fox were in Cornwall for very long, but we can see how the fascination with natural light must have rubbed off on them. And the interest in beaches, sand, warmth, boats, fishing.

Pretty, dreamy and romantic pictures!! So far from where I am today with my post and just hearing about a bomb at Norways biggest newspaper, where friends of mine are working... waiting to hear more.
Have a great weekend!

Kristin
dear god... what are people thinking. I wish all your countrymen safety and peace.

The paintings were dreamy and romantic. I wonder if
a] in tough times, ordinary citizens don't want to think of politics, violence and the sad economy or
b] as artlover noted, the Foxes were simply more interested in leisure activities and family relationships.

as I was writing about Vanessa Bell and Duncan Grant today, it occurred to me that we really do know other art marriages. Or in this case, an art long-term affair.

Funnily enough Helen I was working out the number of art marriages in this area, which is full of artists. And on the whole they seem fairly happy and don't seem to cause jealousies.