In 2005, The Jerusalem Post ran an appeal for information about South African philanthropist Isaac Ochberg. He was the man who helped to finance, and centrally participated in the rescue of Jewish children in 1921 from the Pale of Settlement (Ukraine in particular) and their resettlement in South Africa. A film called The Ochberg Orphans was the result, directed by Jon Blair in 2008.

You might know of heroic figures during WW2 eg Irena Sendler, Oskar Schindler, Raoul Wallenberg, Varian Fry and Nicholas Winton but 1921 seems very early for heroic gestures. Many thanks to my South African friends for bringing this story to my attention.

In the early 1920s, reports trickled through to South Africa of tragic forces occurring in the Ukraine. Following the collapse of the old Czarist Empire in 1917, rival Red and White armies were fighting for control. Although the battles did not start out as particularly anti-Semitic, the Jews' condition deteriorated. Famine was followed by typhoid epidemics for the entire population, but it was made worse for the Jews by pogroms. Ukrainian and Polish peasants joined forces with reactionary military forces to massacre Jews wherever they found them inside the Pale of Settlement.

Jews begged their cousins in South Africa for help. These pleas immediately stirred South Africa's Jewish communities. People asked at meetings across the country if at least the children could be rescued from the Ukraine. Before any organisation could step in, generous offers of financial and other assistance were made by Russian-born Cape Town businessman Isaac Ochberg.

Two questions became critical: How could the orphans be rescued from a war-torn region, and would the South African government create any difficulties in admitting them? The Prime Minister, General JC Smuts immediately granted permission to land.

As reports of the Jews' plight continued to arrive in South Africa, the size of the tragedy became clearer. 100,000-150,000 Jewish men, women and children were slaughtered by Ukrainian nationalists and another 400,000 Jewish orphans were starving. The next step was for someone to travel to Eastern Europe and make arrangements on the spot. Ochberg agreed to go. For two months Ochberg travelled by train, wagon and on horseback around the Pale, looking for orphaned children. The Ukrainian children knew only that "The Man From Africa" was coming and he was going to take some of them away to a new home, on the other side of the world.

Ochberg's worst problem was how to select which children to take and which he had to leave in Eastern Europe. Since the South African government required that the children had to be in good physical and mental health, careful selection was essential. In addition, only those who had lost BOTH parents were accepted. In Pinsk alone, so many children had been orphaned that 3 new orphanages had to be opened. 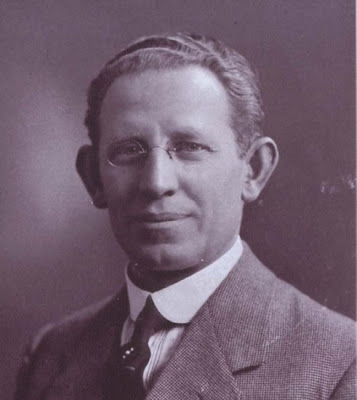 Ochberg moved from town to town, collecting orphans. How did he get the children out - on wagons!

Three months later, with the 200 children in London, he wrote to the leadership in South Africa: "I have been through almost every village in the Polish Ukraine and Galicia and am now well acquainted with the places where there is at present extreme suffering. I have succeeded in collecting the necessary number of children, and I can safely say that the generosity displayed by South African Jewry in making this mission possible means nothing less than saving their lives. They would surely have died of starvation, disease, or been lost to our nation for other reasons. I am now in London with the object of arranging transport and I hope to be able to advise soon of my departure for South Africa with the children."

A tremendous reception awaited the orphans when they came ashore in Cape Town. So large was the group of children that the Cape Jewish Orphanage was unable to house them all, so 78 went on to Johannesburg.

Many youngsters entered Cape Town High School where a new extension to house the Ukrainians was officially named the Isaac Ochberg Wing. Ochberg served on the Cape executive of the South African Jew­ish Board of Deputies and bequ­ests were made to Jerusalem’s Hebrew University for scholarships. The hero died in 1937 while on an ocean voyage, 59 years old. He was buried in Cape Town at one of the largest funerals ever seen there. Ochberg left what was the largest ever single bequest to the Jewish National Fund. The JNF used it to redeem a piece of land in Israel called Nahalat Yitzhak Ochberg - which included the kibbutzim of Dalia and Ein Hashofet.

An Ochberg dedication ceremony will take place at Kibbutz Dalia on 19th of July this year, 90 years after the rescue project. For the thousands of descendants of his orphans, he is the reason they are alive. The original orphans'  children and grandchildren will honour Ochberg’s memory by the establishment of a JNF Memorial Park and museum that will bear his name. As the Blair film suggested, Ochberg's legacy is a reminder that a small group of people can, through their actions, make a big difference. 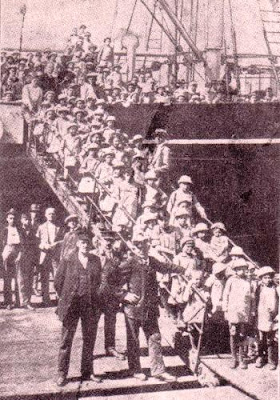 The names of the orphans have been published in Tracing the Tribe: The Jewish Genealogy Blog. It is recognised that the list is not yet complete and that the spellings may be imperfect.

I don't even know what to say - happy that he managed to save the children he did save, but overwhelmed again by our cruelty to each other.

I was born in South Africa after WW2 but now I am a transplant to Australia. I don't remember any of the children back at school in the 1950s saying their parents had been Ochberg Orphans.

In the last 10 years, all this has changed. Emails seeking the children of the original orphans have been sent to all ex-pats in Australia, and films and books have been published. You can even find the 1921 list of names in "Tracing the Tribe: The Jewish Genealogy Blog", April 2010.

This is a great story.

History like this is so hard to digest. But the rescue is a wonderful story, new to me.
I lived at Kibbutz Hazorea, next to Ein Hashofet and Dalia, but never heard about Nahalat Yitzhak Ochberg.
The JNF Memorial Park dedication is good news!

Helen, do you have some details about the July 19 dedication, like what time?
Maybe I can get there . . .

Apart from anything else about Ochberg, he was an amazing donor to JNF. I am delighted to hear you live in that exact part of the world.

The world is so divided and vicious STILL that sometimes I don't feel like getting out of bed. It seems as if it isn't worth trying... nothing will work :(

And then sometimes we hear great stories of how a very ordinary individual can make a real and lasting difference.

I am not sure why South Africans of your generation didn't know of the story back in the post WW2 decades. But now, as you say, the books, films, newspaper articles and facebook pages have changed all of that.

I will add the Tracing The Tribe link to my post, many thanks.

I'm SO glad your post and the forthcoming ceremony remembers real hero's like Isaac. The war between the white and red russians (and Britian's pathetic role in it) is barely remembered now but had all sorts of consequences as you outline here. Well done Helen.

I am not well read in this topic (the Russian civil war). But it seems reasonable to assume that after November 1917, any group who had ever opposed the Bolsheviks merged in an unholy and ugly alliance: monarchists, the old army, the church and many foreign nations. What a nightmare :(

sometimes blogging good stories can be located in the normal places eg academic history journals or from tour guides at a museum. But sometimes stories just fall in my lap.

I was having afternoon tea with South African friends who emigrated to Australia 20 years ago. We were talking about Making A Difference in the world and both of them mentioned Isaac Ochberg. So I whipped out a tram ticket and made some quick notes on the back!

You have a wonderful blog!! I found it very informative and refreshing.

I wanted to know if you are interested in taking this amazing blog to the next level.
Tech Globe is a leading web design and development company that can help blogs in the following two ways:

1. We can help you in designing a website customized as per your needs which will be:

a) A more effective and user friendly medium to post information than a blog.
b) We will also provide you with domain name registration, domain hosting followed by website design and development.

2. We can also design customized blog templates to give your blog that well deserved new look!

- Payment only on completion of the project, after your approval.
- There are absolutely no hidden fees involved.

We also offer obligation free customized design options for your new website/blog template, to help you get an idea of our amazing designs and how they will help your blog.

In case you are interested, do feel free to email me at sales@tech-globe.com or you can also fill up our online enquiry form here http://www.tech-globe.com/contact.php.

I love your posts, keep up the great work!

many thanks. I am glad you thought this was a wonderful blog and that the story about Isaac Ochberg was very informative. I don't think there is anything I would change.

HI,
Very nice blog. Really like you blog.. Thanks for sharing..

In 1921 Isaac Ochberg was allowed to select only 200 orphans to take to South Africa, including the author's grandmother, her two sisters and one brother. But one sister, Faigel, who had been in hospital when Ochberg arrived, was lost. It took years of seeking but in 1971, after being assisted by the Red Cross, the search for the lost sister was finally over. She was in Buenos Aires, alive and married with children and grandchildren.

The South African sisters travelled to Buenos Aires and finally reunited with Faigel. Sadly Faigel died not long after meeting her siblings, but now the grandchildren of the five original orphans are still in contact.

thank you for a heart breaking, heart warming story that would be familiar to many families, especially those where lost children were concerned. Isaac Ochberg was terribly stressed by being limited to so few, desperately needy orphans. But thank goodness for Argentina, a relatively underdeveloped country that you noted was encouraging immigration.