Rooms with a View: open windows in 19th Century paintings

The art exhibition called Rooms with a View: The Open Window in the C19th was held in the Special Exhibition Galleries, Metropolitan Museum of Art New York, April-July 2011. This exhibition focused on the Romantic motif of the open window as first captured by German, Danish, French and Russian artists around 1810–40.

Even though the exhibition has closed, you can still read the catalogue essay which was written by Sabine Rewald. And the review by Dr Ben Harvey.

You might have thought this was a limited topic for art historians to get exercised about. Especially since many of the rooms were sparsely furnished and very quiet. Most had one figure who was captured reading, writing or painting; some had more than one figure; the rest had no human presence at all. All 60 works in the catalogue had just one thing in common – an open window.

I am very familiar with the lone figure standing in front of an open window in 17th century Dutch art, so I had expected a lot of comparative works by Vermeer, Dou and de Hooch for example. But sadly there is very little mention of what came before 1800. I found just half a page lightly mentioning C15th Northern Renaissance artists, and the Dutch and Flemish interiors like Vermeer’s Girl Reading a Letter at the Open Window c1659.

So I went to Martha Hollander for an explanation about 17th century Dutch paintings. In her book An Entrance for the Eyes: Space and Meaning in Seventeenth-Century Dutch art, she suggested the view outside C17th Dutch windows positively enriched the primary scene at the centre of the canvas! Even if their open windows invited an analysis of the relationship between public and private life in urban life, Dutch artists never intended to detrimentally compare an unfulfilled life inside the home with a happier one outside.

Perhaps it was for this reason that the Metropolitan brought in paintings for this exhibition from museums in the USA, Denmark, France, Austria, Sweden, Italy and especially Germany, but not from the Netherlands. 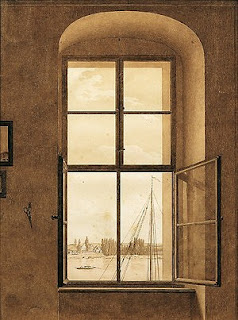 I will start with the most influential example of German artist Caspar David Friedrich (1774–1840). In View from the Artist's Studio, Window on the Right, c1805–6, the viewer can see that Friedrich’s studio in Dresden faced the river Elbe. In this small sepia work and its pair, the artist did not seem to be very interested in all the activity out on the Elbe River; rather he focused on achieving a finely tuned balance between the darkened interior and the bright outdoors. I don’t think he quite pulled it off, since the inner walls were too bare and prison-like. But perhaps that was intentional. In this sober presentation of the cut-off point between the inside home and the outside world, Friedrich discovered a Romantic symbol for longing.

Friedrich’s influence was such that his followers settled in Dresden, then a centre of Romanticism. The motif of the open window was not previously known to the Carl Ludwig Kaaz, Johan Christian Dahl and Georg Friedrich Kerstin, but it soon appealed Friedrich’s immediate art circle. Because the younger men copied it and turned it into the classic Romantic subject, View from the Artist’s Studio took on a greater importance that might have been obvious. 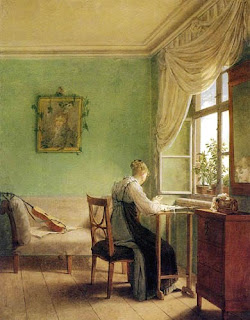 Georg Kersting (1785–1847) was another German artist who was 11 years younger than Friedrich but they were great friends and professional colleagues. After Napoleon defeated Prussia in 1806-7, Prussia was occupied by French troops. But by 1812-3, Napoleon retreated and a patriotic spirit revived in Germany. Yet Kersting reflected none of Dresden’s war destruction, plagues, hunger or, later, 300,000 French prisoners of war.

In a small oil, Kersting depicted artist Louise Seidler quietly embroidering in an immaculately clean room. The cool light of a summer morning, pale green walls and pale blue-and-white sky were all very gentle. Only the Empire-style furniture, curtain, musical accoutrements and potted plants on the sill gave a sense of the sitter’s personality.

Was Louise Seidler in mourning? Was she sick? The Rooms With a View catalogue suggests that this painting was not intended as a portrait of Ms Seidler, and clearly it was not a landscape; instead it was a study of contemplation and morning light. 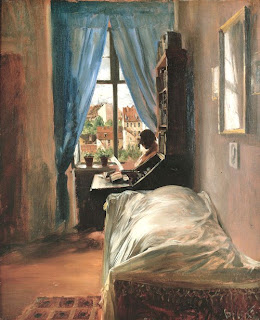 Adolph Menzel (1815–1905) was another German artist, but much younger than Caspar David Friedrich and Georg Kersting. He painted this small oil picture of his bedroom in daylight shortly after moving into a large fourth-floor apartment on Ritterstrasse, a lovely new district of Berlin. Menzel too was interested in the effects of light in a very ordinary bedroom. But Menzel turned expectations exactly upside down: he painted the person and furniture inside with room with broad brushstrokes but used exacting details in depicting the view of the distance city outside the window.

How is that possible? Every first year Perception student knows that the human eye can see details up close, but the further away an object gets, the blurrier it becomes. Clearly Menzel used the room interior only as a context for what he was most interested in: the rapidly expanding, and very exciting city outside.

The images in Rooms With A View were well painted, thoughtfully curated and beautifully printed in the catalogue. The question the viewer at the exhibition and the reader of this book has to answer is: “what theme held these 60 early-19th century works together”?

The German Romantics loved untamed nature invested with emotion. They valued their belief in the primacy of feeling, even in natural phenomena. So Rewald’s answer needs to be examined from that Romantic perspective. "The Rom­an­t­ics found a potent symbol for the exper­ience of stand­ing on the threshold between an interior and the outside world. The juxta­pos­it­ion of the close familiarity of a room and the uncertain, often idealised vision of what lay beyond was immediately recog­nised as a metaphor for unfilled longing”. Tahlib said “luminous windows were a yearning for some-thing distant & ineffable, a metaphor for spiritual longing”.

In Constant Moyaux’s View of Rome from the Artist’s Room at the Villa Medici 1863, Rewald’s thesis seems perfectly sound. In Georg Kersting’s Young Woman Sewing by Lamplight 1823, no outside world is visible. Was the young woman longing silently and secretly? Even the best art historian could not answer that question. 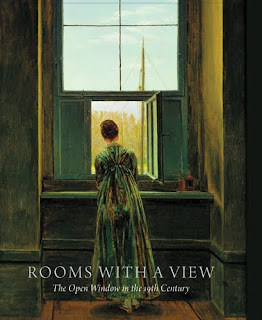 Rooms With a View front cover
Friedrich, Woman at the Window, 1822

Rooms with a View: The Open Window in the 19th Century was written by Sabine Rewald for the Metropolitan Museum of Art in New York. It was published by Yale University Press, New Haven and London in 2011 and supplied by H Niyazi of Three Pipe Problem and Inbooks. Many thanks.

What a fun exhibition! The catalog sounds really nice. I'm curious to look at the catalog in more detail.

I wish that I had heard about this exhibition earlier. With my blog title being "Alberti's Window," I feel like I should know about a thematic exhibition dedicated to open windows "on the world!"

Hello Helen:
We are so pleased that you have drawn our attention to this exhibition since its subjects are of great interest. We are, as it happens, often attracted to paintings which depict interiors and, even more so if there is a sense of the outside to give further context to the interior being depicted.

What a fascinating combination of artists and countries have been shown in the exhibition. All, as you say, with rather different motives as to why they are painting their particular interior subject and the style which they have chosen to deploy. Altogether most beguiling.

What a great post. I knew about the exhibition and there are some good web sites. It shows how many ways we can view art and take new things from it.

I am really very glad after read here and I appreciate for the information that you presented here.

I saw the "Rooms with a View" exhibition a couple of months ago and was firmly determined not to like it (I live in Italy and I am a Renaissance and Baroque guy at heart.) But, as you say, it is utterly absorbing--one of those shows where I totally lost myself for hours and then wondered where the afternoon went!

I love both the name of your blog and your avatar... of course you should be fascinated by the contents of the Rooms with a View exhibition :)

exactly. Old paintings that depicted interiors are still very meaningful to modern audiences. We moderns would probably enjoy the paintings even more, IF the exterior views enriched the interior being depicted. Martin Drolling, for example, did that beautifully.

isn't that the truth. I did not study the Romantic movement at all as a student, and hadn't done much reading about it since. But there are indeed many ways in which we can view art.

you are very welcome. I hope you visit again in the future.

I love the Menzel. The photographer's tool of differential focus can achieve this effect, but it is interesting to see it in a painting.

And I loved the Met too, on my only visit to NYC - unfortunately when our dollar was worth all of US48 cents!

the Metropolitan Museum of Art in New York is one of the greatest places on earth, agreed!

I think the NGV's winter blockbusters are always wonderful. But oh I wish the Rooms With A View exhibition toured Australia after the Met programme had finished in New York.

good to hear from you. It is not surprising that an art historian of the Renaissance and Baroque persuasion was firmly determined not to like German Romanticism. Me too.

But I would note two things:
a] as Hermes suggested, there are many ways in which we can view art, including the art of countries and eras we never particularly enjoyed before.

b] German Romantic interiors seem less difficult for us to examine than German Romantic landscapes. Perhaps early 19th century people did indeed rebel against 18th century rationalism and did advocate spiritual values and emotional independence, but it shows less radically.

Many thanks for the lovely review Hels, and in such record time after receiving the catalogue.

I liked that you mentioned the Netherlandish antecedents, even though the catalogue did not. If one wanted, you could even trace this motif back to its sacred roots, and The Arnolfini Wedding(and likely beyond). All roads lead back to van Eyck at some stage!

I think that we really could trace the open window motif back to its roots, the 17th century and earlier. But isn't that true of all of art history?

I think of that every time I hear modernists say that form follows function, as if the concept was invented last week.

I love the Kersting painting, haunting and lovely.

Aren't depictions of thresholds, anything limnal, very old and not uncommon?

I am not sure if the concept of thresholds is being Romantic or post-modern. The Kersting painting IS haunting, and not just because of the open window and the time of day (break of day). Have a look at the portrait on the wall with sad flowers around the frame - death may be the ultimate threshold.

I have added a reference to Dr Ben Harvey's review of the exhibition, published in the Three Pipe Problem blog. It is well worth reading.

I hope you weren't attracted to a post on windows ONLY because you are a blinds person :)

Examine "Die Sentimentale" by Johann Peter Hasenclever (1810–1853) in Gods and Foolish Grandeur. After 1842 the artist settled in Düsseldorf, and painted this small, perfect painting in the mid 1840s.

To show that the same passion for the world outside and for colour might have been operating on photos, as well as paintings, see Gods and Foolish Grandeur:
https://godsandfoolishgrandeur.blogspot.com/2019/05/madame-misonne-devant-sa-fenetre.html
They are beautiful.