I had stayed in Istanbul in the past, but had not heard of Pera Palace Hotel back then.  So for this post, I've had to depend on the history that came from the hotel itself.

"The sun that suddenly rises behind the hills of Pera, over the minarets of the city and the Golden Horn, fills your heart with a crimson joy.” Thus Knut Hamsun, Norwegian Nobel laureate in literature who visited Istanbul late in the C19th, described his mornings. Like other western intellectuals - from Alphonse de Lamartine to Gérard de Nerval, from Pierre Loti to Theophile Gaultier, Hamsun delighted in visits to this imperial city, a city which changed the course of history forever. 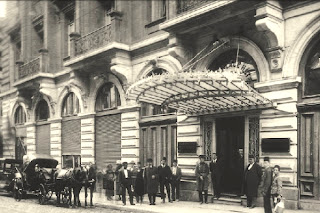 As Istanbul became more accessible via C19th developments in transportation, the capital to three ancient empires began to reveal itself to the modern European world. At first, only humble board and lodgings opened up for visitors coming to Istanbul, whether they were coming to see the stunning Bosphorus, the works of world famous Ottoman architect Sinan or the narrow, stone paved, multi-lingual streets.

But when the worldwide famous Orient Express train chose Istanbul as its last stop in the East in 1883, Istanbul began to attract a new crowd: the ennobled and the monied classes of Europe. Unfortunately there were no hotels in the city that could meet the high standards of these Orient Express passengers. 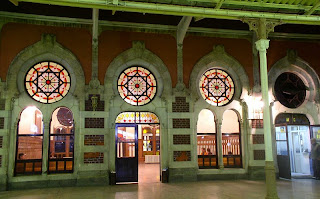 terminus of the Orient Express train in Istanbul

So Compagnie Internationale de Wagon Lits, owners of the Orient Express Train, bought Pera Palace Hotel. The Compagnie picked guests up from the train terminus in Istanbul, then used the hotel to accommodate guests during their stay in the city.  The company welcomed guests with the one symbol – on the train and on the hotel.

Soon the Pera Palace Hotel in Tepebasi, which was founded in 1892 and celebrated with its grand opening ball in 1895, emerged. Designed by local architect Alexander Vallaury, the hotel had neo-classical, art nouveau and oriental tastes. Apart from the royal palaces, Pera Palace Hotel was the first building to have electricity, including an electric elevator made of cast iron and wood. Bathrooms, that provided the only running hot water in the city, were a privilege that was exclusive to the hotel’s guests. Tall spacious rooms lit by magnificent chandeliers witnessed unforgettable tea and dance parties.

This was a tumultuous time for Istanbul – consider WWI, the Occupation of Istanbul, the Turkish War of Independence and the founding of the Turkish Republic in 1923. Leader and founder of Turkey, Mustafa Kemal Atatürk, stayed at the Pera Palace Hotel for the first time during WW1, then many times after that. Room 101, where he stayed each time, is now kept as a museum; the original furniture and memorabilia are carefully maintained.

Agatha Christie's "Murder on the Orient Express", apparently inspired by the author's stays at the Pera Palace Hotel, was published in 1934. Room 411, where she stayed and wrote, is now preserved in her honour. 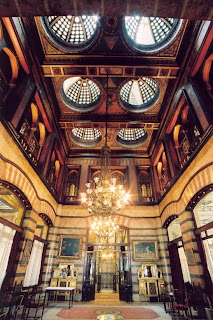 A major restoration project was started in 2008, and the hotel reopened to its guests two years later.

World Tourist Attraction blog described the renovated version of the hotel: white marble steps from the foyer lead to the Kubbeli Saloon, a soaring room at the heart of the hotel, with parquet floor, banded columns of Carrara marble and six domes pierced with discs of turquoise glass. This is the setting for the English tea ritual, a traditional speciality that is accompanied by music on the Schiedmayer grand piano. The Orient Bar and enchanting dining rooms are described as some of the most atmospheric in Turkey, redolent of turn-of-the-century taste. 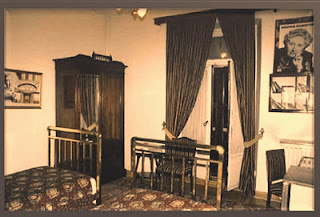 To see how beautiful the Orient Express train still looks today, visit Objects Not Paintings blog. Christie’s Paris held a large sale of Orient-Express items in Sep 2011, including a collection of architectural fittings from the train such as the original Morison African mahogany marquetry panels. Alas, as Bella has shown, the train only goes on the Paris-Istanbul route once a year.

I love Istanbul. I have been there a few times (last visit was in 2010) but I must admit I missed the Pera Palace Hotel entirely. Now I must surely return. My favourite history of the city is Philip Mansel's Constantinople. Thanks a million for informing me about the history of this hotel.

Looks wonderful. To have stayed there in the 30's. Alexander Vallaury was a most fascinating character.

Mr Doolan,
It is so weird. I knew more about the original Orient Express train than any other historian in the southern hemisphere e.g who designed the parquetry, the beds, the meals, how tickets were sold etc etc. But it never occurred me to ask what happened to the pampered guests, once they arrived in Istanbul.

A student suggested I examine the newly renovated Pera Palace Hotel. Bless her.

Hermes,
there must have been something sooooo seductive and intriguing about Istanbul, it appealed to all sorts of writers, artists, craftsmen etc etc. More than other would-be Orientalist sites, it seems.

I often think reading Enzie's Oriental site that the near east allowed an exotic fantasy that did have some basis that the Oriental Express and loads of books and pictures encouraged.

Oddly I came across this today which is pretty typical of this fantasy.

If you ever had the time Helen a history of the Orient Express seems a gap but this article about its end interested me anyway.

Sounds perfect. But exactly where is Pera? It would want to be quite close to the Orient Express terminus.

Trainman,
Pera is in the centre of European Istanbul, right on the Bosphorus Sea. It could not be in a more attractive area.

Hermes,
nod... an exotic fantasy that could realistically and safely happen.

There must have been hordes of northern Europeans in Cairo during The Season each year. So the more intellectually stimulated of them might have wanted to try somewhere new and just as exotic.

It's great that they've restored the hotel to the same level it was in it's heyday but preserved those rooms of interest like the one where Ataturk stayed.

I had tea in the hotel a few years ago, before the restoration, and loved the faded grandeur - all very atmospheric! I did return to Istanbul last year, but the hotel was still closed - I'd love to see it now, although I do worry that some of the atmosphere will have been lost.

it appears that the hotel was renovated, as closely as possible, with turn-of-the-century taste. Exposed steel and masses of glass would have been totally inappropriate.

I particularly like the look of the bar, the tea room and the dining room - my favourite rooms in any hotel :)

Although people would still like Turkey, I don't think the Orient Express goes to Istanbul any more. Why did it stop and where does it go to instead?

the Orient Express stopped going on the Paris-Istanbul as recently as 1997. Although you can still go on the Venice-Simplon Orient Express train, I personally would have preferred the original route, had I had enough money back then. But apparently there are quicker, cheaper and more ordinary ways of travelling :(

I have added two references to the blog Objects Not Paintings. Super photos of the train's interior, especially the fittings.

A student just said to me:
We saw the memorial room at Pera in this morning's lecture on Agatha Christie. I have actually stayed at the Pera Palace.

Reading an article "objects not paintings" about THE Orient express I remembered 2 Wall lighting fictures I bought in 1980.These lighting fictures are quoted in your article as the so called tulip lamps. These wall fitures can be found in several cars from the ORIENT EXPRESS including dining car 4110 and the 4141 Pullman car highlighting the BACHANNALIAN MAIDENS glass panels. They also are decorating the lacqured panels in other cars.

I am now ready to sell these lamps who are in perfect condition. The problem is that i don't know anymore what I paid for them (bought them in Paris) nor a price I schould ask.
Nevertheless if you happen to know a collector of O.E. collectibles and you are willing to put us in touch I would appreciate it.

Thank you in advance and best regards from Belgium. I hope you are not living in the wrong place in queensland. We saw here on tv that some places are hit by a terrible storm.

As a historian, I know little about connoisseurship and nothing about finances. So I would normally recommend going to the key museum related to the art objects you are interested in. Contact or visit the Orient Express Museum in the Sirkeci Gare Railway Station in Istanbul. But NB there is only one room and no curator that I can see. It displays great exhibits from the train itself and lots of text-based history. See train furniture, the stove that provided heating, conductors’ uniforms, contemporary typewriters etc.

Thankfully Melbourne is 3000 ks south of the cyclonic crisis in Queensland :)

For a modern experience on the Orient Express train to Venice, read To Discover Ice:
https://todiscoverice.blogspot.com.au/2018/01/the-orient-express.html