From "Anna Maria Grosholtz" to the mighty "Madame Tussaud"

Joe and I had been to Madame Tussaud’s wax museum in London with our sons (before they were too independent and stroppy to travel with us). But at that stage I had no idea if Madame Tussaud was a real person or not.

Anna Maria Grosholtz (1761–1850) was born in France, but as her father died when she was still a neonate, her mother had to take work wherever it was offered - Switzerland. Mrs Grosholtz worked for one Dr Philippe Curtius, a physician who used wax modelling to illustrate anatomy lessons for young students.

Dr Curtius moved to Paris in 1765, starting work by setting up a wax exhibition. In that year he made a waxwork of Louis XV's last mistress, Madame du Barry, a cast of which is the oldest work currently on display. In 1767 Mrs Grosholtz took her daughter and joined Dr Curtius in Paris. The first exhibition of Curtius' waxworks was shown in 1770 and seemed to be very popular. In 1776, the exhibition moved to the Palais Royal. 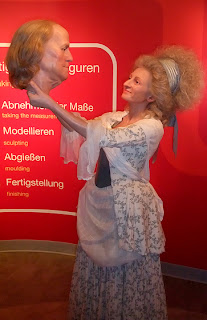 Wax model of a young Maria making a wax model, in the Berlin museum
Dr Curtius taught young Maria Grosholtz the art of wax modelling and found that she was a very interested pupil. In 1778, she created her first wax figures, mostly famous people like Jean-Jacques Rousseau and Voltaire. Apparently she lived at Versailles from 1780 to the Revolution a decade later, which might explain how she knew royals so well.

But knowing the royals was not a good thing, once The Revolution started. It could have been a very dangerous time for Maria, but fortunately she was called back to Paris and met many of the people who played a significant role in French life then, including Napoleon Bonaparte.

Maria Grosholtz was arrested during the Reign of Terror (1793-4) and was at great risk of execution by guillotine. But due to the intervention of a member of the Committee of Public Safety, Maria, Dr Curtius and his family were saved  and released. When the mob stormed the Bastille, Maria had to make wax death masks of the victims of the guillotine, particularly King Louis XVI, Queen Marie Antoinette, Marat and Robespierre. These death masks were hugely popular and guaranteed her a steady career.

On his deathbed in 1794, Dr Curtius left his collection of waxworks to his protégé. In 1795, she married François Tussaud, an engineer from Mâcon, and became Madame Tussaud. 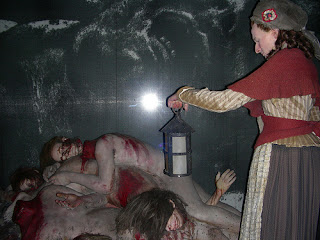 Chamber of Horrors, in the London Museum
Life improved in the new century (1802) when Madame Tussaud and the children travelled to London, but I have no idea what happened to the husband. Due to the ongoing Napoleonic Wars, she was unable to return to France, so she exhibited her collection across the major cities of Great Britain and Ireland for 33 years.

I wonder if Madame Tussaud herself was aware of the newsworthiness of her travelling exhibitions. At a time when news was communicated largely by word of mouth, Madame Tussauds’ exhibition was a kind of travelling news service, providing insight into global events and bringing the ordinary public face-to-face with the movers and shakers of the era.

Thus it took decades before she could open her first permanent exhibition in Baker St in London, a salon richly decorated with mirrors in the old French taste. However as anyone who has visited will know, the main attraction of her museum was rather macabre: the Chamber of Horrors. This part of the exhibition included victims of the French Revolution that she made with her own hands, plus more recently created figures of murderers and other low lifes.

After living through the most hideous and dangerous era in French history, Madame Tussaud would have initially considered herself lucky to survive to 35 years of age! She must have truly been blessed, since she actually died in comfortable old age, at 88. Long after her death, the museum moved from the Baker St Bazaar to its present site in Marylebone Road (in 1884).
Posted by Hels at 12.3.11

I have been to the waxworks in Berlin. Loved it, but Berlin seemed to concentrate on different topics from those you described in London. Did Madame Tussaud know that her museums were going to spread across the world, after London?

For some reason I've always found them a bit creepy but its a fasciinatng story. Especially before photography it must have seemed really something.

I am with you, creepy. Sometimes they seem to move there heads. There was a great movie about a mad man who dipped real live people in hot wax to make them. Every time I go I think of that. Richard

Agreed, the Berlin museum is very different. Its own home page says it displays some of the most important turning points of German history - influential politicians of the C19th, then the decadent 20s, to the change of the Second World War, the Cold War, the fall of the Berlin Wall and the reunification of Germany. It shows German architecture; Karl Marx; the Berlin Wall; Konrad Adenauer; Willy Brandt; John F. Kennedy, German tv stars etc

Could Madame Tussaud have known what was coming in her name, in other countries? No, I doubt that very much. She died in 1850 and all the foreign Tussauds museums didn’t open until recently - Amsterdam, Berlin, Hollywood, Hong Kong, Las Vegas, New York, Shanghai and Washington DC, and soon in Dubai. Each museum does/will specialise in its own fascinating material.

Hermes and Richard
very creepy indeed. I couldn't even look at the Chamber of Horrors :(

But it made sense at the time. Maria had already make wax death masks of the victims of the guillotine and these death masks were hugely popular! If she was going to have a steady and a well paid career, she needed to create objects that were both fascinating and newsworthy. Bingo!

Hels, thanks for your comment on my blog again today. It does look like there are extra timbers to requirements but I think they are part of the original design.

Mr Bar
I think mid-19th century architecture is often overlooked. Yours is a gorgeous example.

Alas for Madame Tussaud's original site in the Baker Street Bazaar, all I can find is a contemporary print: http://tinyurl.com/4hekh4w

What a fascinating post! I knew (or thought I knew) that Madame Tussaud was a real person but I did not know about the rather gruesome parts of her story. I love the Chamber of Horrors and always have!

But I must agree that the French Revolution was such a monumental part of history that it needed to be documented in as much detail as possible. And I assume people respond better to visual historical artefacts than to textual historical documents