William Charles Wentworth (1790–1872) was born at sea. They were en route to a penal settlement at Norfolk Island, where his parents surgeon D'Arcy Wentworth and convict Catherine Crowley were being transported. D'Arcy Wentworth had been accused of highway robbery, so he accepted transportation instead of something worse.

In 1796, 6-year old William Wentworth arrived with his parents in Sydney, then a primitive settlement for convicts and soldiers. The family lived at Parramatta, where his father became a prosperous landowner, Principal Surgeon, Superintendent of Police and Treasurer of the Police Fund.

In 1803 the lad was packed off to Britain, where he was educated at a school in London. He returned to Sydney in 1810, where he was appointed acting Provost-Marshall by Governor Lachlan Macquarie, and given a land grant of 1,750 acres on the Nepean River.

The names William Wentworth, Gregory Blaxland and William Lawson are known by every Australian school child. In 1813, they searched for a route across the Blue Mountains west of Sydney, specifically to open up the grazing lands of inland New South Wales. As a reward each of the explorers was granted 1,000 acres of land, enabling Wentworth to become a gentleman pastoralist and South Pacific trader. Wentworth was now doing rather nicely, for a 20-something of rather ordinary parentage. 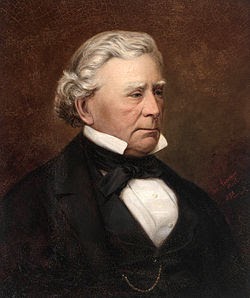 William Charles Wentworth
In 1819 Wentworth published the first book written by an Australian in which he advocated an elected assembly for New South Wales, trial by jury and settlement of Australia by free emigrants rather than convicts. This was quite radical stuff.

This was in perfect time to inherit the vast property of his recently departed father. Suddenly one of the wealthiest men in the colony, William Wentworth bought land in one of Sydney’s eastern suburbs and rebuilt Vaucluse House. It had started life as a small cottage in 1803 but became quite a mansion under Wentworth’s watchful eye. The neo-gothic style can be seen in the crenellated parapets and turrets. The roofs were made from slate and galvanised iron, and the veranda posts were made of iron. Later additions included a bay windowed front with French windows and louvered shutters, fine Georgian cedar joinery, marble chimney pieces and Pompeii tiles to the hall floor. 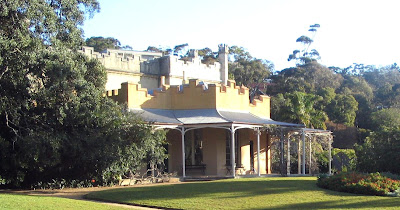 Vaucluse House
Vaucluse House still has a large collection of surviving original documents relating to the house, its contents and occupants. Visitors will see a number of extant buildings and gardens, and the house retains much of the original form, interior space and detailing. Where renovations were required, the new decorations were based on mid century inventories and illustrations. As you can see, the drawing room was essentially the feminine domain, excellent for afternoon teas and pre-dinner drinks. The dining room was a heavier room, filled with oak timbers, darkish marble for the chimney piece, formal portraits and dark wall paper.

Wentworth went on to become the colony's leading political figure of the 1820s and 30s, pursuing his causes vigorously: representative government, the abolition of transportation, freedom of the press and trial by jury. These beliefs did NOT always win him friends amongst the powerful elite that ran Sydney society - neither did the fact that his mother was a convict. Perhaps as a result of this social snobbishness, Wentworth joined the Australian Patriotic Association and founded a newspaper, The Australian, to pursue his causes further.

By 1840, transportation to New South Wales ended. With the establishment of an elected Legislative Council, the dominant issue in Sydney Town became the campaign to break the grip of the wealthy landowners over the colony's lands. Yet on this issue, Wentworth sided with his fellow landowners against the democratic party, who wanted to break up the squatters' runs for small farmers! He was elected to the Council in 1843 and became the leader of the conservative party! Why did he change his political views so radically?

In 1853 Wentworth chaired the committee to draft a new constitution for New South Wales, which was to receive full responsible self-government from Britain. His draft provided for a powerful, unelected Legislative Council and an elected Legislative Assembly with high property qualifications for voting and membership. Most of the writing was done in the study of Vaucluse House.

What a tragedy – his progressive nationalism began to disappear. Wentworth suggested the establishment of a colonial peerage drawn from the landowning class! Of course his draft constitution aroused the bitter opposition of the democrats and radicals. In the event, Wentworth’s version was substantially changed to make it more democratic, although the Legislative Council remained unelected. Once the Select Committee that drafted the constitutional document in Sydney had finished its deliberations, Wentworth accompanied the document to England with other Australian selected representatives. Their goal was to facilitate its passage through the British Parliament.

With the establishment of responsible government in 1856, Wentworth retired from the Council. 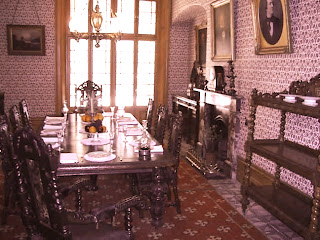 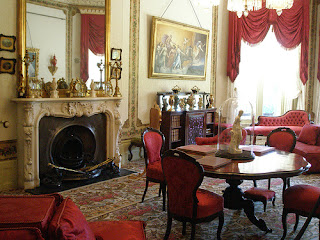 Dining room (above) and drawing room (below) in Vaucluse House
William Wentworth settled in England and was a member of the Conservative Party in the 1860s. He died in England, but at his request, his body was returned to Sydney for burial. The public funeral of William Charles Wentworth was held in 1873 and the initial service was held at St Andrew's Cathedral Sydney. A lengthy procession followed the hearse to Vaucluse. Amongst the companies of mounted police, guilds, societies and members of government, a contingent of 300-400 Australian-born citizens and a small group of Australian Aborigines marched.

William Wentworth may have gone from progressive explorer, journalist and politician when he was young to… a defender of landed interests when he had substantial money himself. But he WAS one of the leading figures of early colonial New South Wales and his Vaucluse home remains one of the few colonial estates in Sydney to retain much of its architecture and grounds.

I recommend the Vaucluse House guidebook.
Posted by Hels at 5.3.11

You are correct about the trio Blaxland, Wentworth and Lawson. Even up here in Queensland we learned about them!

Thanks for the interesting post. That house is a marvel and it is terrific that it has been retained.

And there is lots of fascinating reading in the guidebook too.

Fascinating. He came from interesting stock - a father who was a surgeon who was prosecuted for highway robbery but still became very successful - unusual and must have been a big influence on the son. Shame about his politics but not that unusual in my baby boomers generation. Look what happened to Tony Blair !

Foto
funny that you should say that! I grew up in Victoria and ONLY knew about Blaxland, Wentworth and Lawson's exploration across the Blue Mountains. Not Wentworth's contributions in politics, law and journalism.

Hermes,
I know that Wentworth and his wife were not accepted into polite society in Sydney. William was the son of a convict and his wife, Sarah, was the daughter of two ex-convicts. It must have been a nightmare for them. No fashionable families would visit Vaucluse House, nor would they invite the Wentworths to their homes.

But I would have thought upper class snobbery should have made Wentworth more sensitive to social justice issues with advancing age, not less sensitive.

Blair started off so hopefully, didn't he?

When I was at school in Sydney, we went on an excursion to Vaucluse House. I didn't know anything about elegant architecture or furnishings. All they told us was that a very important man lived here - important for our history and exploration of the outback.

I wonder if this was all considered Sydney history, Joseph, and not Australian history. I grew up in Melbourne and had not heard of Vaucluse House until a recent trip to Sydney.

Even the tearooms were lovely :)

Hels, thanks for your comment on my post today. AussieBum is an Australian brand of underwear and swimwear, which is also becoming big overseas now. :) It's a cheeky name for a brand and I think they would have been targeting the fashion conscious gay crowd at the Mardi Gras.

Mr Bar,
you are a proud Sydney-sider :) Thanks for your comment.

I am so glad I came by your Blog by the way of Andrew. Please drop by my blog soon. Thanks, Richard at www.myoldhistorichouse.blogspot.com

welcome! In one of your posts you wrote "My Old Historic House was started in 1845, in Federal Style. In 1860, a front addition was added, along with 5 porches and ornate cornices, that turned the style of the home into Italianate."

I agree that in the restoring a house and making it into a Historic House Museum, the most important decision is what period to retore the house to. Vaucluse House had the same problem, which they resolved by leaving both the neo-gothic AND the georgian bits. But that is not always a happy compromise.

Vaucluse House is an excellent historic house in the eastern suburbs of Sydney and the Blue Mts crossing is one of those great tales from school. There are monuments near Mt York (west of the Blue Mts) celebrating the crossing. I assume as we approach the 200th anniversary that there will be recreations and commemorations and other various events in the year.

I had forgotten about the 200 year anniversary (1813-2013) coming up. It would be a perfect time to take primary school children on an excursion to important sites, including the places where the three explorers crossed the Blue Mountains, Wentworth's home, NSW's first Legislative Council building etc.