I am interested in the Bar Marsella for two important reasons. Firstly it is apparently the oldest bar in Barcelona, opening for business in 1820. Secondly it is apparently where Ernest Hemingway could be found, drinking his absinthe, any night of the week during his period in Barcelona. I know that Hemingway was in Spain for considerable periods during the 1920s and at least twice during the late 1930s, so the connections are possible. And there are definitely references to absinthe in  For Whom the Bell Tolls,  Death in the Afternoon and other of his stories.

And not just Hemingway. I would love to know if Oscar Wilde, Vincent Van Gogh and Henri Toulouse-Lautrec socialised in Bar Marsella, as suggested. Toulouse-Lautrec certainly loved the green drink and created cocktails based on absinthe, but I can't find any specific references to him being in Barcelona. 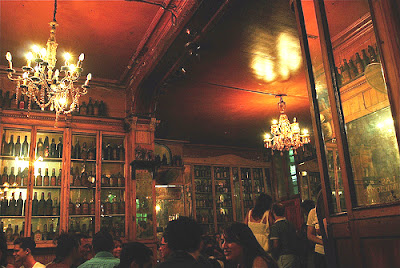 Bar Marsella
Original Victorian chandeliers, hanging from the shiny ceiling, spread an eerie glow onto the faded bar mirrors, the woodwork and the customers. Lisa Abend noted that there is another glow; the infamous absinthe spirit casts its greenish glow from tables everywhere, including those being used by groups of rowdy students on their Gap Year abroad. I assume their parents don’t realise what their sons and daughters are up to.

Absinthe is unpalatable by itself, so a ritual is required. Each glass of absinthe comes with a lump of sugar, a fork and some water. The drinker holds the sugar on the fork, over the glass, and drips the water onto the sugar until it dissolves into the absinthe, which then changes colour. The warm glow that results is the famous absinthe Green Fairy that writers wrote about and the artists painted. Since Bar Marsella had always and still has a faded bohemian atmosphere, we can assume people visit now for the decadent history of decades past.

Matt Skinner was particularly fascinated with the eating and drinking habits of Barcelona. Noone eats dinner before 9 PM and so the later one gets to Bar Marsella, the better. 11 PM seems perfect. As I am definitely a night person and resent bitterly having to start my day before noon, this is the city for me. However I know why France, Netherlands, Switzerland and other countries permanently banned absinthe between 1910-1914 and I am far too alarmed about potential brain damage to try the drink myself. 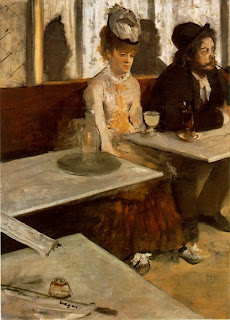 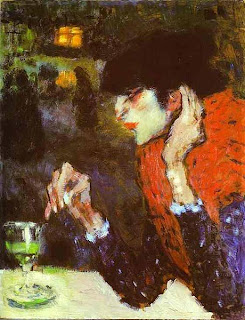 Picasso, The Absinth Drinker, 1901, Melville Hall Collection, New York
Both Degas' and Picasso's drinkers may have been creative, bohemian people, socialising in creative, bohemian Paris, but they looked bleary eyed and very sad.﻿ Toulouse Lautrec's drinker, on the other hand, was well dressed and looked in control of his environment. 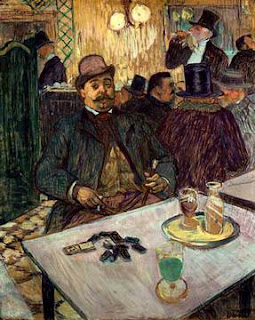 Toulouse Lautrec, Monsieur Boileau at the Cafe, 1893, Cleveland Museum of Art
Thank you to the readers who discussed the paintings and decorative arts associated with absinthe drinking in restaurants and bars. The ritual certainly created a demand for specialist art objects that can be examined in their own right - spoons, glasses, carafes etc. Furthermore there were beautifully designed posters and other commercial ephemera that survived since the Belle Epoque. One wonderful site is Absinthe Originals.

Onlinecollege org published an annotated list of their "15 Most Famous Cafes in the Literary World". As you would expect, La Rotonde and Le Dome Cafe in Montparnasse won first and second place respectively but La Coupole only came 12th and Bar Marsella failed to win a guernsey at all.
Posted by Hels at 15.3.11

What a wonderful bar. I've always suspected that the ritual and drinking of absinthe (and no doubt other stimulants) have had more to do with great art than is generally mentioned.

Not only a connection with art. If the ritual is important, it must be even more important in the company of other people. I think absinthe might be more social and more bohemian than beer or wine.

Some believe the ban on absinthe was created largely by those in the temperance movement. There were certainly mistakes in the "science" about it.

Regardless, it reputation sticks, and I always think of the wild scenes in Ken Russell's movie Gothic - supposedly induced by absinthe.

Absinthe spoons are popular collectors' items and worth their own attention because of their beauty and often ornate designs.

Hermes
you may be onto something here. I found so many late C19th and early C20th paintings of drinkers, absinthe drinking may have had an interesting relationship with art.
Think in the first place of Manet, Picasso at least three times, Degas at least twice, Raffaelli and particularly Viktor Oliva. Plus heaps of other artists whose work we may not be familiar with.

Billback
What a great thought - public ritual and its role in the group's social life.

But even though all the paintings show people drinking in public spaces (restaurants, bars), there seems to be a sort of isolation around the individual drinkers. As if they were being contemplative and creative in their own private space.

The spoons you refer to seem to have been very elegantly designed and crafted. The drinking glasses were of a special shape and beauty, as were the carafes, sugar pots, fountains and other items used in the ritual.

Even the more commercial objects (advertising posters and bottle labels) could have come directly from the sublime hand of Alphonse Mucha. Life copying the arts?

The modern drink of absinthe, in the west, bears little resemblance to the original excepting the over all flavour of the original drink (and its incredibly high alcohol content). Many substances, like Wormwood, a hallucinogenic component of the original drink, have been banned and are available only in certain eastern countries, and some more liberal western countries such as the Netherlands. I have had absinthe myself a few times, the best being in Prague, but alas, I was not touched by the green fairy!

Lord Cowell
many thanks.

All the pictures I have seen of modern absinthe drinkers show happy, social, talkative groups; not derelict loners staring at their inner soul.

Your explanation, that the hallucinogenic components of the original drink have been removed, would account for this.

What an interesting and unusual post (and comments too).

Helen, thanks for your good question about when Gilad was last seen. I answered with a link to the video of him.

There are many joys from blogging. It occurs to me, for example, that we may know a great deal about certain subjects, but the writing up of articles _and_ receiving responses from readers are the two blogging tasks that pull it all together.

I know Spain very well; ditto Hemingway, Wilde, Van Gogh, Degas and Toulouse-Lautrec. But the Bar Marsella, the belle epoque, absinthe ritual and Hemingway's books made for a special era in modern history.

Looks like a great place - I can imagine Ernest sitting there with absinthe in hand.
I saw that wonderful Degas painting in the Musee d'Orsay last year & loved it.

Dianne
You are so right. I only had one month to travel around Spain, not nearly long enough. But the evenings were fantastic fun, in tapas bars, wine bars, flamenco performances or walking down La Rambla. Hemingway knew where to celebrate life!

I am in Barcelona as we type. The area was seedy and has since been gentrified, but I still wouldn't drink absinthe. But the food,.... Oh the food *sigh*

Because of the chandeliers can I assume this was always quite formal, as is and was El quatre Gats. Strikes me as odd that the young avant guard artists could afford to imbibe in such places unless they had a patron(s).

No patrons early in their careers, so I imagine impoverished writers and artists didn't waste money on clothes, food or lodging, spending whatever they had on coffee, booze and absinthe. Bar owners were often very understanding, allowing the young men to pay for their drinks in sketches which could be hung on the walls.