While we are still enjoying multiple-channel, around-the-clock coverage of the 2010 Commonwealth Games in New Delhi, now would be an appropriate time to examine the development of water-sport facilities for the 1956 Olympic Games in Melbourne.

The 1956 Olympic Games in Melbourne were the first Olympics ever held in the southern hemisphere, so Australia was very keen to be seen as professional, modern and successful in its sporting endeavours. 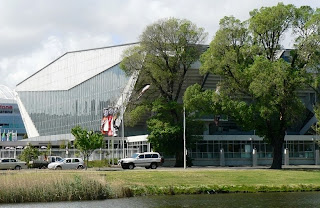 The Olympic Pool was to be purpose-built as an indoor sporting arena for diving, swimming and water polo; plus it was to be the venue for the swimming part of the modern pentathlon events. And it was to be the first fully indoor Olympic swimming venue in an Olympic Games!

An international competition was held in 1952, to design and build the most modern water-sports building ever. It was won by architects Kevin Borland, Peter McIntyre, John and Phyllis Murphy and engineer Bill Irwin who, in 1953, formed a partnership that continued for three years. 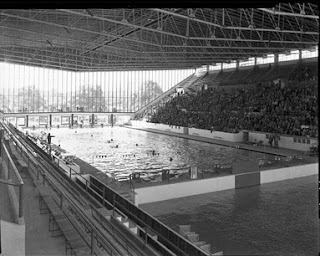 Their design was for a pool that would be enclosed in a dramatic structure. Raked tiers of stands on either side were tied together at their highest points by elongated lozenge-shaped roof trusses. The structure was stabilised by ties running from the same points down to anchors in the ground. Construction began in October 1954 and the building was completed in 1956.

David Islip had no doubt that the 1956 Games were the crowning achievement of the Melbourne School of Architecture in the post-war period. He showed that the pool in particular was successful in representing a spirit of optimism; Australian architecture was given a taste of national identity. Australia's most impressive architectural photographer, Wolfgang Sievers, was commissioned to document the building in a series of eight stunning images.

The engineer responsible for the filtration system was Les Webberley, my father. By the time the building had finally been completed, there was a rush to have the 300,000 gallons of water brought to the two pools and to have the filtration system in perfect condition. The daily newspapers were filled with articles about whether the pools would be in pristine condition before the first athletes stood on their starting blocks. They were! 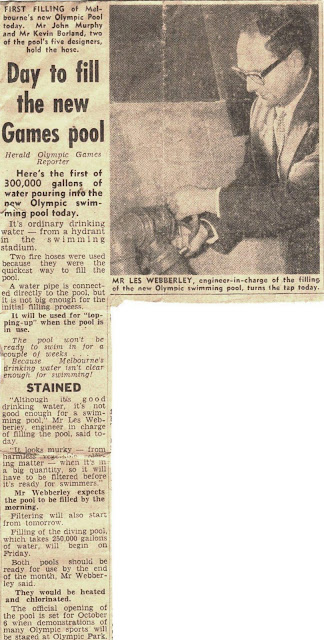 Finally, in November 1956, the Olympic Games were officially opened by Prince Philip. The Olympic Flame was lit by Ron Clarke and the Olympic Oath was taken by John Landy.

I have no doubt that the 1956 Melbourne Olympics gave us our biggest sense of excitement since this city held its only International Exhibition, way back in 1880. The Olympic Pool is the only major stadium structure from the 1956 Games largely intact today. Appropriately, it is listed on the Victorian Heritage Register.

Presumably every nation wanted to wow the world with its Olympic archit­ecture. Swimming blog  mentioned the importance of the swimming pool architecture for the 1960 Games in Rome. Apparently Foro Italico's 50-meter indoor pool was loaded up with fascist art and architecture, even though it was completed 15 years after the end of WW2. The neoclassical building, similar to an ancient Roman bath, was built using designs created during the fascist era and by the same architect. Attractive mosaics covered the deck and the walls.

You do post such interesting things, not being sporty I'd never thought about this.

But somehow a city seems to rise to the challenge presented by once-in-a-century special events eg Olympic Games or International Exhibitions.

I assumed it had been demolished. I am sure it wasn't your father's fault, but I recall the pool used to leak badly in the late eighties I think.

Interesting post. The story of the pool water is fascinating.

If we examine the architecture with 2010 eyes, we may not understand why people were so impressed with the building's modernity back in 1956.

But the raked tiers of stands on either side were quite dramatic. And even though the building was closed in, glass walls at both ends filled the space with natural light.

So I suppose it doesn't matter so much that the space has been used for rock bands over the last 54 years or that water leaked in the 1980s.

Thank you for this interesting glimpse back to 1956!
This architectural gem still leaves one in awe.

You might find this interesting. Just come on the wires:

What a nice story, Helen.

Tonight I saw the architect Peter McIntyre interviewed about the problems (especially noise) encountered by the pool's totally closed-in design and the concrete floors/seats. His greatest fear was that the official race instructions and commentaries would not be heard properly.

So in late 1956 he tested the sound problem with a concert in the pool, played by the Melbourne Symphony Orchestra. Handel's Water Music was played on a stage built over the water of the diving pool. It all worked well!