In 1633 residents in the tiny Bavarian town of Oberammergau vowed that, if God spared them from the effects of the bubonic plague that seemed unstoppable, they would produce a passion play every ten years thereafter for eternity. Thank you gifts to God were not unusual. Votive offerings were made in thanks to God all over Europe, usually in the form of a complete church (from royalty), an entire chapel (from a noble family), one altarpiece or one stained glass window (from a guild) or a tiny gift (from a worker). But I have never heard of a play as a votive offering before, even a play depicting the life and death of Jesus. 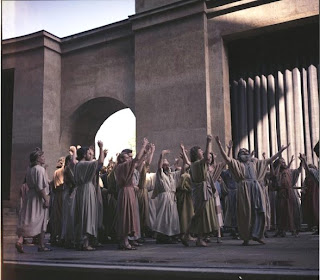 Anyhow the people of Oberammergau fulfilled their vow to perform the tragedy of the Passion of Christ every ten years, for the first time in 1634. As if to make it personal, they set up their stage over the fresh graves of the Black Death victims. But perhaps it was simply because the parish church could not handle the audience numbers. Just as well because, by the time the play had been put on over a few decades, visitors from the surrounding towns were pouring into tiny Oberammergau.

I assume the passion play became an important component of the town’s economy. Admission fees were charged from 1790 onwards, and the hotels and coffee shops were delighted to provide the thousands of outsiders with creature comforts during the 10-day period. Artists also did well. Already a home for woodcarving, Oberammergau’s local wood carvers were invited to design and create special passion-play-relevant objects eg religious subjects. Other artists designed frescoes, based on religious themes or fairy tales, and painted them on the external walls of the town’s homes and shops.

In time, the simple wooden stage structure was made more visually meaningful. The first permanent stage seems to have been built in 1815, later enlargened. Finally in 1890 a new, purpose-built theatre was built and, inside the arched hall capable of holding 4,700 spectators, people were comfortable, had good views of the stage and were mainly dry in case of rainy spells. 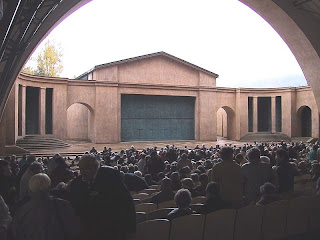 About half of Oberammergau’s citizens participate in the passion play, meaning that there are almost as many people on and behind the stage as there are in the audience. Not all are actors, of course. Some are musicians, lighting technicians, costume designers and make up artists.

The play is long for everyone. Performances begin in the early afternoon and end late in the evening (with a long dinner break). And since up to half a million people want to see a performance, they have to repeat the play 100 times during the May-October season.

The participants take their role very seriously, bringing the story of Jesus of Nazareth to life. The play begins at the point when Jesus is entering the holy city of Jerusalem, includes his crucifixion and ends up with the Resurrection. The spoken text has fantastic musical and HUGE choral accompaniments, and scenes have been carefully chosen to examine the interrelationship between the Old and New Testaments.

In 1934 Hitler apparently visited Oberammergau for the play, and was delighted with the vicious manner in which Jews were depicted. So since the extermination of Europe’s Jews by German soldiers and their allies, the German government and the Vatican have been very sensitive about real or potential anti-Semitism in passion plays. Therefore changes have been made to the text of the play since World War Two, to exclude the charge of Jewish deicide and to end the notion of collective guilt. It is made clear to the audience, for example, that Jesus was born, raised and died a wholehearted Jew. 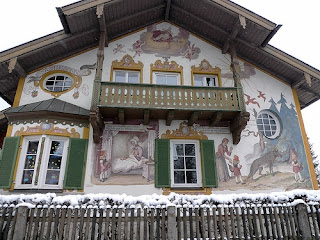 Sara Sturtevant noted that there is a good quality museum in Oberammergau which is full of religious and secular woodcarvings. The museum was created by Lang, a local woodcarver himself and a seller of woodcarving. Cullism added that the rococo church of Saint Peter and Saint Paul was truly beautiful, with wondrous frescoes and lots of gilt. Heather on her travels loved the house murals.  They started in the 18th century when the houses were given painted window surrounds to embellish the simple facades. Later on, religious and fairy tale scenes became popular. The term for these painted Luftlmalerei honoured one of the earliest local artists Franz Seraph Zwinck who lived in the house called Zum Luftl. 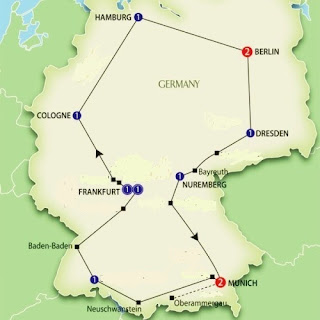 Oberammergau is in the very south of Germany
Posted by Hels at 13.10.10

Fascinating. There is an interesting passion play annually in the small Czech town of Hořice na Šumavě, in southern Bohemia. In its modern incarnation it began in 1816, although there's a tradition that passion plays in the town date back to the Middle Ages. There was an interruption during the communist period, when the purpose-built theatre was demolished, but since the early 1990s the people of the town have put on the play every year in the open air, to audiences of around 500. It's not very well known, charming, and a real community event. Naturally, the town carpenter plays Jesus.

I love this topic :) I think the emergence of passion plays in Catholic countries must have been a real delight for medieval communities. From my undergrad days, I remember the four English mystery plays from York, Towneley, Wakefield and Chester, for example.

So for modern passion plays, in Oberammergau, Hořice na Šumavě or any other modern site, it would be very interesting to know:
1. where is it acted - in a Catholic church, in the open fields, or in a secular theatre?
2. does the Vatican vet the theology?
3. which religious and political powers oppose the passion play?
4. who comes to see the play - just locals or tourists as well?
5. how important are massed choirs in the play etc etc.

Interesting post Hels! I read a great article recently on the effect of the Black Death on art in the 14thC, fascinating stuff..

I must admit - the niftiest depiction of the passion in my mind is in the tiny mirror in the background of the Arnolfini Portrait.

Whilst I had heard of the Oberammergau play, I knew nothing about it.

The cycle of medieval mystery plays associated with the Feast of Corpus Christi covered all of biblical history, but especially Old Testament stories. Passion plays, on the other hand, focused specifically on the main event of the New Testament, Christ’s sacrifice and resurrection.

Passion plays were hugely popular in (pre-Reformation) Catholic Europe and Britain, almost as popular as the Corpus Christi cycles. The only surprising thing to me is that they reached the height of their popularity in the _15th_ century!

Oberammergau must be tapping into a medieval sentiment that doesn't seem to fit the modern era. And doing it very well.

Another top post! I've long been fascinated by the Oberammergau cycle.

There was a very interesting article in der Speigel in May discussing the effects of modernity on the play's production - diversity also has come to town.

ChrisJ, we always feel attached to our blog topics, but this one is mesmerising, isn't it?

Over the centuries you can sometimes see that a project starts for one reason and continues for another. I can imagine that in 1633, in the depths of a fatal plague, promising a 10 year passion play performance would have seemed perfectly reasonable.

Now it makes more sense to look for, as you did, the effects of modernity on the play's production. Why do people still go, in ever increasing numbers mind you, to a medieval custom of an intensely religious theme?

The history of the Passion Plays is wonderful. They are so moving and soulful. Thank you Hels.

Karena and Jo,
thanks for commenting.

We all learn so much! That is the beauty of everyone's history blogs, I think. That we touch people who are first year undergrads, post grads with tons of experience and lots of people who are just interested readers.

The accountant in me couldn't understand the years but I looked on Wikipedia! I see that it is performed in years ending with 0 now and was only performed in 1934 and 1984 as they were the 300th and 350th anniversaries respectively.

I love the story of the passion and always loved easter time as a child as we got to watch things like Jesus of Nazareth and Jesus Chris Superstar on television. (Strange given that my mum is Sephardi).

Emm, not strange at all. The performance is very moving and the music stirs the soul. In fact turn off the images and just listen to the music!

I wish I could have stayed longer in the area when we were there in July as the countryside and mountain scenery is beautiful- it would have been nice to also visit the Linderhof palace. Do take a look at my article about Altotting close to Munich - it's a beautiful pilgrimage town http://www.heatheronhertravels.com/a-pilgrimage-to-see-the-black-madonna-at-altotting-in-germany/

Heather, I have been to Oberammergau and I have been to Lindhof, but never to Altotting. So that prompts me to ask you why some places have captured the international imagination and other places seem known mainly to locals?

You noted that tens of thousands of pilgrims visit during the three days of Pentecost. But medieval pilgrimage sites lived or died as a result of publicity, so I suspect that would be true for modern pilgrimage sites as well.