I have four passions in life:
travelling around every corner of Europe;
books;
paintings; and
avocado with lemon juice and grated black pepper. If Museyon Guides had slipped some avocado into their Art and Travel book, they would have hit the jackpot.

Art and Travel is a travel guide to Europe with a particular focus. It is centred on just five artists (Van Gogh, Vermeer, Goya, Caravaggio, Munch) and the cities they made famous (Arles, Delft, Madrid, Rome, Oslo). This immediately raises a problem – who chose those five particular artists and why them? I have no argument with Vermeer and Caravaggio, and would have definitely put them in my top five as well. But I think I would have included Chagall, Constable, Reynolds, Van Dyck, Durer, Rembrandt, Manet, El Greco and others! I can certainly understand how difficult the selection process must have been. 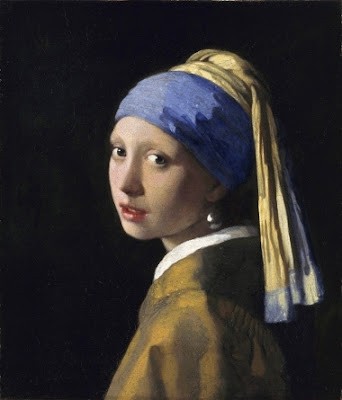 Vermeer,
Girl with the Pearl Earring, c1666
Mauritshuis, The Hague

The main body of each chapter is written as a normal art history text. For example “Spain, which had remained on the periphery of the Napoleonic Wars and the violent revolutionary upheavals that wracked Europe at the turn of the 19th century, found itself fully embroiled in the conflict after the 1808 French invasion of the Iberian Peninsula. The invasion, coupled with a disastrously confused political situation at the Spanish court, provoked the bloody uprisings and merciless reprisals in Madrid that Goya would later commemorate in his huge paintings The 2nd of May, 1808 and The 3rd of May, 1808 (both painted in 1814)”. As an art history academic, I want that basic information available to all travellers who have a serious interest in art. And for art history students, even those who do not plan to travel.

But this guidebook has an extra strength; it enables the tourist to follow a trail with more pertinent information than most tourists could find for themselves. The Where to See… The Walking Tour pages provide the important link between each geographical location and the relevant painting that incorporated that location. I know a great deal about van Gogh, for example, but would not have known which café had been depicted in Café Terrace on the Place du Forum. The Extended Travel pages are equally important, given that artists tended to have a number of homes during their adult lives. Anatomy of a Masterpiece pages give short but detailed information on each of the artists’ best paintings, including their locations in public collections. And the Suggested Web Sites and Books pages were very helpful.

I didn’t need hotel and restaurant recommendations since they are available in any of the thousands of ordinary, non-specialist travel guide in print. And I didn’t need to read the tourist highlights of the cities being visited, or souvenirs, for the same reason. But having said that, the guide did locate some places that had a legitimate but unknown (to me) connection with the artist eg a café in Oslo where the creative types liked to hang around, 120 years ago. 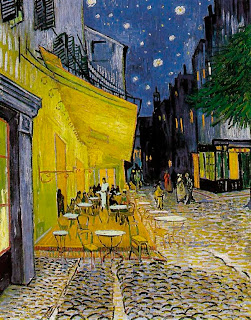 In the end, there is a recognition that famous artists lived ordinary lives with ordinary daily issues to deal with. Vermeer couldn’t afford to paint AND feed his multitude of children, so he held down a paying pub job as well. Caravaggio was a tough drinking lad with a penchant for rough girls and boys. No-one bought van Gogh’s paintings during his life time, so he was financially dependent on his brother and sister in law. The art-loving traveller will want to see it all.

Many thanks to Laura Robinson for the copy of Art + Travel Europe: Step into the Lives of Five Famous Painters, Museyon Guides, March 2010

I love the idea of setting artists in their proper geographic context. Not a bad choice of artists I would say.

I agree, difficult to choose, but the title is not "The Most Famous", and it would be impossible to write such a book, as it's completely subjective. In my own personal journey through art my preferences have narrowed, but perhaps only for the time being. I think it's important and much more interesting to be open to new ideas and influences, although I struggle with that with some modern and pop art.

Caravaggio was a painter I think? From an early age his name has cropped up in my life yet I know nothing of him. I should do some research but I am so lazy and Hels, you do it so well.

I would love to use the Art and Travel Europe, for all of the selected artists. But who wants to go to Arles. Give me Vienna, Berlin and St Petersburg.

Andrew, you haven't lived, until you have seen Caravaggio (1571 – 1610)'s raw, emotional and sex-filled images up close. I would have a look at Olga's Gallery in the first instance: http://www.abcgallery.com/C/caravaggio/caravaggio.html

Hermes, columnist and Trainman, agreed. Setting artists in their proper geographic context is certainly the way to go.

If you have a passionate interest in other artists, other cities, other continents, other art genres - drop a note to Museyon Guides. They should listen. How far wrong could they go, doing Klimt's Vienna, for example?

Nice way to organize a trip.

Have you seen the 2003 movie The Girl with the Pearl Earring? It's surprisingly good and brings in the development of Vermeer's famous blue pigment.

I totally agree about the avocado!

What a neat idea.

I love the ideas here. The art is just breath taking and vibrant. http://biddips.com/

I gasped out loud when I first saw a Caravaggio at the NGV. His representation of light in his paitings is extraordinary.

Although I have never studied art and therefore am a complete Philistine, visits to The Louvre, Musee d'Orsay and Musee Rodin have been absolute highlights of my trips to Europe.

it is interesting that the Art & Travel guidebook has, for each artist, a section called Art Imitating Art. There is a full page on films and books based on that artist, the very first for Vermeer being Girl With a Pearl Earring.

I normally become very territorial over subject matter I know well, and resent Hollywoodisation of a serious topic. But Girl With a Pearl Earring was done very sensitively.

On the contrary, your eye is not limited by what is critically popular this week, or what sells the best. Caravaggio knocks your socks off, doesn't he?

I am not male, not Christian, not 16th century, not Italian, not a boozer, not a brawler and not gay, yet Caravaggio speaks to me as meaningfully as if he was a contemporary.

wow..nice painting you have creted ...love it..keep it up..

There are no references to Girl with a Pearl Earring until 1881 when it was bought to auction by a Dutch collector. And it took years before it could be formally attributed to the 17th century master. By the time the painting was left to Mauritshuis in 1902, it was worth a fortune.

The art world is very strange.