In an earlier post on Francis Greenway, convict architect in Sydney, I spent considerable time discussing the Hyde Park Barracks in Sydney's Macquarie St. This was one of the first significant buildings of the convict era, part of "the British Empire's Gaol" for its unwanted, its criminal and its most impoverished citizens.

This very week, UNESCO's World Heritage committee met in Brasil and accepted eleven convict sites across Australia, including Hyde Park Barracks in Sydney, Port Arthur near Hobart, Norfolk Island penal settlement and Fremantle Prison in Perth. The Weekend Australian (7/8/2010) noted that these 11 sites provided a complete representation of all the significant elements of Australian convictism  in 1788-1868. They covered penal stations, gang labour, assignment, female factories and the Tasmanian probation system. 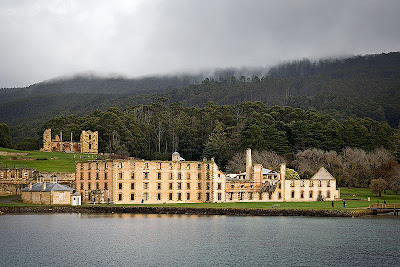 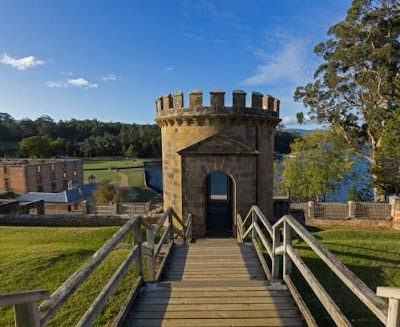 Guard tower, Port Arthur
looking over the penitentiary below

The UNESCO World Heritage committee also insisted that there had to be a universal significance in Australia's convict history. This was easily done, in two ways. Firstly the range of citizens caught up in the convict services (white Britons, Australian aboriginals, West Indian blacks, Greeks, Malays, Chinamen etc) was much broader than expected. Secondly the committee examined the international debate on how criminals should be treated in the mid 19th century.

From 1842 until its closure in 1877, Port Arthur was a nasty prison and a military and industrial centre, encompassing mining, farming, timber cutting, boat building and many other trades. The two guard towers stood as part of the military infrastructure allowing the authorities to police the convict population. Plus they stored arms and ammunition.

Port Arthur now combines history and scenic beauty with innovative interpretation to tell the stories of the harsh discipline and determined industry of the settlements during the convict era. The boulevards of towering oaks and English elms, the charismatic ruins set amid expanses of lawns and convict-era gardens contrast the natural bushland setting on a stunning harbour and the harsh discipline of its past.

Situated on the Tasman Peninsula near Saltwater River, the Coal Mines Historic Site was Tasmania’s first operational mine. Developed both to limit the colony’s dependence upon costly imported coal from Sydney, as well as serving as a place of punishment for the worst class of convicts from Port Arthur, the mine was operational for over 40 years. Today, the Coal Mines offers visitors the chance to discover among the ruins and scenic vistas an integral part of the colony’s penal system, only 25-minutes drive from Port Arthur.

I wass impressed with the new list - took a broader view of history and social contexts than I expected.

Hermes, I too was quite surprised. Yet the Australian Government
World Heritage Page noted in 2008: "Together the sites represent the global phenomenon of convictism - the forced migration of convicts to penal colonies in the 18th and 19th centuries - and global developments in the punishment of crime in modern times. The Australian Convict Sites are the preeminent examples of our rich convict history, with 3,000+ convict sites remaining around Australia. This is unique in the world today. In 2007 the importance of the Australian convict memory to all humankind was recognised when some of Australia's convict records were included in UNESCO's Memory of the World Register".

It would be interesting to know if the commitment to a broad historical context, of universal significance, came from UNESCO or the Australian government.

We are visiting Tasmania soon and want to see the Port Arthur Penitentiary. Is it open to tourists and is it suitable for primary school children?

This is a building that has had a very chequered history. It started life (1843) as something else, got converted into a huge penitentiary (1857), the burned to the ground at the end of the century. The renovation programme of the 1960s left visitors with an excellent idea of what life was like back then.. guards, showers, food, sleeping, praying and working.

As long as you don’t let primary school aged children run around alone, they will learn an enormous amount about Australia’s early European history. Punitive and harsh, but a model prison according to 19th century thinking.

Thank you to Tasmanian Geographic, Dec 2013, for the extra information.

I have a book called Port Arthur: The Australian Convict Experience. Perhaps I can give it to the CAE library.