In my high school, students had to write and present one major history project each year. In 1961, mine was on the Eichmann trial. I may have forgotten some of the details, but I have never forgotten the emotional impact that this history had on my teenage mind.

After joining the SS in 1934, Adolf Eichmann rose quickly in responsibility. He made himself an expert on Jewish matters, including studying Hebrew and spending some time in Israel. After the March 1938 union of Germany and Austria, this German-born and Austrian-raised officer was put in charge of the SS unit that handled forced Jewish emigration from Austria.

In January 1939, the Nazis established a similar office for all German-occupied lands. The office was reorganised after WW2 broke out in September 1939 and Eichmann was the logical choice to head up the new team. Over the next few years, its work evolved from expelling Jews from Germany to transporting Jews to extermination camps in Poland.

Eichmann did not create the Final Solution, but he was the senior Nazi official concerned solely with the imprisonment of all Jewish people in Nazi Europe. He coordinated the deportation of Jews from Germany and its occupied territories. And when Nazi plans moved into genocide, Eichmann organised the transportation of Jews to extermination camps.

After the war, Eichmann and his men disguised themselves as simple German soldiers, to escape the Allies. Clearly Eichmann's relatively low rank hid the nature & importance of his work, so when he was captured by Allied soldiers, he easily escaped. How extraordinary! In Jan 1946, Eichmann was even discussed at the Nuremburg war crimes trials as the man who ran the Nazis' murderous scheme.

Eichmann understood that he had to get out of Dodge, and quickly. For the next four years Eichmann stayed somewhere in Germany, always out of the reach of the authorities. Then, somehow, he travelled safely to Argentina. History Today showed that he must have felt very safe in Buenos Aires because he bought a house, held down a job and lived a normal family life as Ricardo Klement. And as the 1950s rolled on, he was correct. Nazi hunting was of no interest to Western governments who now saw Russia as the enemy, not Nazi Germany. 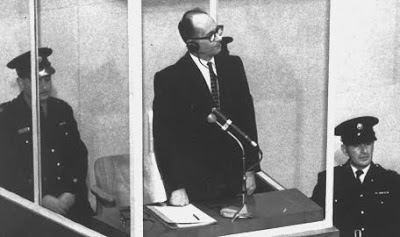 Eichmann inside his trial booth, Jerusalem

But capturing Nazi war criminals had always been a major concern of Jewish organisations and Holocaust survivors. After its creation in 1948, the new State of Israel was determined to hunt down Nazi war criminals and bring them to justice. As part of these efforts and perhaps the top priority case altogether, Eichmann was tracked down in Argentina by Jewish secret servicemen.

The Israelis knew that taking Eichmann from Argentina might been seen as violating Argentina's sovereignty. West Germany and East Germany may have also had a case for demanding that the Eichmann trial be conducted in their courts. But after substantional advice on international law, his captors transported Eichmann to Israel in 1960 and tried him for war crimes in 1961.

In all democracies, however heinous the crimes of which they are charged, the accused are entitled to a proper trial. Thus the trial had to be fair and open, and the prosecution still had to prove Eichmann's guilt. Eichmann had the right to a barrister of his choice; he chose a German lawyer, Dr Robert Servatius, with experience defending accused war criminals. The State of Israel paid for part of the defence and the Knesset passed legislation enabling the German barrister to appear before an Israel court. Although the case was conducted in Hebrew, Eichmann gave all his evidence in German and had running translations of the witnesses’ evidence into German.

In any case, the Jewish state’s primary motive in conducting an open trial before the world’s scrutiny was never revenge. In 1960-1, memories of the Holocaust were still very fresh. Most Ashkenazi citizens in the country had lost their parents and siblings during the war and wanted to document the details of the atrocities, while there were still thousands of witnesses alive. Israelis saw the Eichmann trial as a way to educate the new generation of Israelis and the world about a vicious, anti-Semitic and totalitarian government.

Bruce Brager noted that far more documentary evidence was collected than needed to convict Eichmann, but Chief Prosecutor Gideon Hausner wanted to add human meaning to dry statistics when presenting his case. The way to make the history meaningful to every individual was through
the personal testimony of eye witnesses.

The Israelis collected a huge amount of evidence from the Germans’ own official archives and from post-war investigations in Europe. In fact the German records collected in Jerusalem for the Eichmann trial greatly outweighed that which had been available to the prosecution authorities at Nuremberg.

Eichmann’s defence was that he had been given a task to perform, because of the success he had found in earlier assignments, particularly the deportation of Jews from Austria. Ultimately Eichmann saw himself as just an ordinary bureaucrat, merely following orders from above. He was quiet and self-controlled throughout his trial in the bullet-proof glass booth.

After an excruciatingly long and detailed trial, Dr Servatius denied the validity of the Nazis and Nazi Collaboration Punishment Law, arguing that the destruction of the Jewish people had not depended on Eichmann. Nonetheless the prisoner was found guilty; later he was sentenced to death and, after an appeal, hanged.

I am very sorry that Israel, a nation with no capital punishment whatsoever, before or since Eichmann, executed a human being (even a Nazi leader). But my parents, aunts and uncles were in Australia during the war. Perhaps I would have felt differently had they been fodder to Eichmann’s extermination machinery.

Thanks for that. A useful reminder always, and sadly one that includes the fact that humankind never learns from its abhorrent behaviour.

Good post. The capture I always found very interesting and it is doubtful if it was actually legal (though moral). Golda lied at the time saying he had been captured by 'private individuals'. The whole role of Argentina is another story but very interesting.

columnist and Hermes, it is a really vexed question.

If Nazi hunting really was of no interest to Western governments who a] themselves gave safe refuge to endless number of ex-Nazis and b] wanted all their energies devoted to fighting the Russian bloc, would any other nation have brought Eichmann to trial? By 1957, when they started chasing Eichmann, nobody gave a hoot how the ex-Nazis lived out their lives in Agentina or anywhere else.

We have to remind ourselves that 1957 was only 12 years after the end of the war at that stage, when the trail was still hot.

There is a Hungarian Nazi in Western Australia who has been wanted for war crimes against civilians for years, but the Australian government hasn't the political will to deport him and the Hungarian government didn't issue a warrant for his arrest until 2005. What were they waiting for - for him to die of really old age?

Congratulations on your award! Ave! Brava!

I'm so sorry. I didn't realize it was accepting my posts!

Your Blog is Fabulous. Good article rather. Very interesting.

I have written a review about the film "The Specialist" about the Eichmann trial: http://andreasmoser.wordpress.com/2010/12/18/film-review-the-specialist-eichmann/

It is now exactly 50 years since the trial so I went back to reread your review of the film The Specialist. Many thanks.

Historians are constantly rewriting their material, in light of changing data and changing historical perspectives. What seemed obvious in 1961 make look quite different in 2011.

Two new books have come out to mark the 60th anniversary. Deborah Lipstadt has written a fresh account in "The Eichmann Trial", published by Schocken, 2011.

And from David Cesarani a recommendation for Bettina Stangneth's book, "Eichmann vor Jerusalem", which has already been published in German (when in English?).

I suppose, as you suggested, the biggest change has been from seeing Eichmann as an extremely talented bureaucrat who merely followed all orders, albeit with relish (a la "Eichmann in Jerusalem: The Banality of Evil" by Arendt 1963). Instead Eichmann now appears to have been brilliant, tenacious, alert and utterly in charge of his own life.

Thank you so much such a informative post. Keep it up...

Your blog is fantastic.Excellent article.Thanks...

I just loved your writing. It's a memorandum that reflects your earlier life. You are a good story teller.

I like your ARCHITECTURE blog!I love to see these kind of outstanding work. Thanks a lot for sharing.

Adolf Eichmann was sentenced to death for crimes against the Jewish people and against humanity in 1961. While this judgment was met with consensus on a national level, some spoke out against it. In 1962 a group of Holocaust survivors and intellectuals, including philosophers Hannah Arendt, Hugo Bergmann, Martin Buber and Gershom Scholem, rejected an epilogue to the trial they believed was inappropriate and sent a petition to President Yitzhak Ben-Zvi to demand Eichmann's death sentence be commuted. They raised important questions about morality for Israel and the nature of a Jewish State.

I finally saw this very good film called "About Executing Eichmann"! I found the concepts discussed between the establishment of the State in 1948 and the Eichmann trial in 1961 to be very much of that era - neutrality, revenge, symbolic justice for the Holocaust victims, self determination for the new nation, giving a voice to the survivors etc etc. Would Gen Y and Gen Z people even understand those philosophical issues today? Probably not.

But if we think everyone knows about Eichmann and the Holocaust, have a look at Newsweek 26th Oct 2015. Carmen Bretin Lindemann was defending her father-in-law Adolf Eichmann on television. “The history that you know is not the real one. The version that you know from movies and books is written by the Jews, and all the world accepts that history. He wasn’t a bad person; he obeyed orders and did not personally kill anyone.”

The thrilling cloak-and-dagger aspects of Eichmann’s capture trial propelled the subaltern SS officer into the uppermost ranks of name-brand Nazi henchmen. Yet where Goering, Goebbels and Himmler reeked of sadism and fanatical devotion to the cause of a Judenfrei Reich, the affectless Eichmann lacked sharp outlines and vivid colours. The mismatch between the smallness of the person and the enormity of his crimes seemed out of whack, almost an insult to the dead millions. The Eichmann case prompted a redirection of historical, philosophical and artistic inquiry into the Holocaust.

THE BANALITY OF THE EICHMANN TRIAL
By Thomas Doherty
Tablet, Oct 2018

was Eichmann's trial truly banal? I was in a Jewish high school back in 1961 and heard more true history that we had EVER heard from our families. For the generation of children born straight after the Holocaust, the Eichmann trial was telling.

Only wanna tell that this is very useful, Thanks for taking your time to write this.

I was having a discussion with students this very week about the importance of the Eichmann story. The locating of the man in South America and his removal to Israel were stories worth telling, but the trial itself was what gave the world its detailed knowledge of the Holocaust. Without the trial, his evidence and the evidence of survivors would never have been heard.

background knockout services said...
This comment has been removed by a blog administrator.
December 29, 2018 6:56 pm

many thanks, but I don't accept advertising and I don't believe in gambling.

globalonlinepills said...
This comment has been removed by a blog administrator.
May 28, 2020 2:42 pm

globalonlinepills said...
This comment has been removed by a blog administrator.
February 05, 2021 5:24 pm

Homeabortionpillsrx said...
This comment has been removed by a blog administrator.
May 26, 2021 4:57 pm