Francis Greenway (1777–1837) was born near Bristol and became something of a well known architect in Bristol and Bath. It is not clear to me what when wrong with his career or personal life, but he came to grief with the law. In 1809 Greenway was declared bankrupt, and in 1812 he was charged with forging a financial document and was found guilty. The punishment, rather harsh I thought, was death, later commuted to 14 years transportation to Australia.

Only one good thing came out of this horrible era. Greenway had been friendly with Arthur Phillip (ex Governor of NSW) who was living in retirement at Bath, and Phillip wrote to Lachlan Macquarie (current Governor of NSW), recommending Greenway to him. 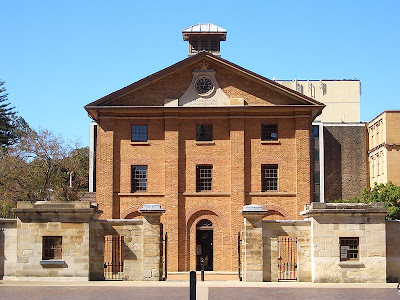 Greenway arrived in Sydney in Feb 1814 to serve his sentence and was soon given work as a colonial architect. My major reference for this era is Shaping Sydney by Chris Johnson. Johnson reported that Greenway first met Macquarie in July 1814 and it was during this meeting that Macquarie mentioned wanting a new town hall and a new courthouse. What is certain is that Greenway was appointed Acting Civil Architect and Assistant Engineer in March 1816.

Between 1816-18, Convict Greenway was responsible for the design & construction of colonial buildings! So successful was he that the Governor of New South Wales, Lachlan Macquarie, gave Greenway his ticket of leave. He was a free man. And as Acting Civil Architect, he went on to build many significant buildings in the new colony. 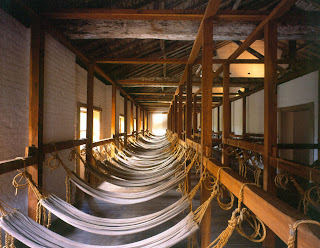 The first Governor of New South Wales, Captain Arthur Phillip, had a very flimsy residence that badly needed remodelling. By 1816 Francis Greenway was commissioned to construct a substantial extension and ballroom by Governor Macquarie, transforming Phillip's house into an Italianate cottage. The stables commissioned for the house by Macquarie in 1816 still stand in the Botanic Gardens today, and form a facade for the Sydney Conservatorium of Music. And Greenway also designed the Macquarie Lighthouse in 1818 to guide ships entering the Heads at Sydney Harbour. Built of sandstone quarried on site, the material was so soft that it eventually eroded and had to be replaced, but the original design is still intact.

Sydney has 49 extant buildings attributed to Greenway's designs. If these buildings had been in Melbourne, and had been built several decades later, Greenway might have been asked to design banks, gold safes, the royal mint and a customs office. But early Sydney had a penal population, so they required facilities more suited to law and order. 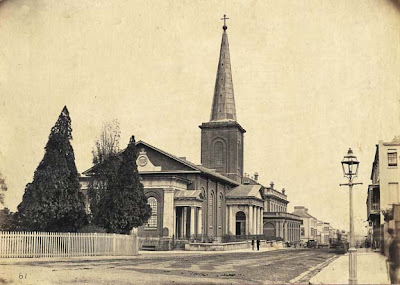 I want to concentrate on three main Greenway designs: Hyde Park Barracks and St James Church, both of which were finished during his working career, and the Supreme Court House, which was finished after Greenway retired from architecture.

Greenway sited the Hyde Park Barracks directly opposite St James Church in Macquarie St. And the courthouse was built on a site immediately to the west of St James Church, thus forming a linear relationship with both the church and the barracks. Johnson showed that Greenway was clearly interested in the individual buildings AND in a total civic context for the new city. 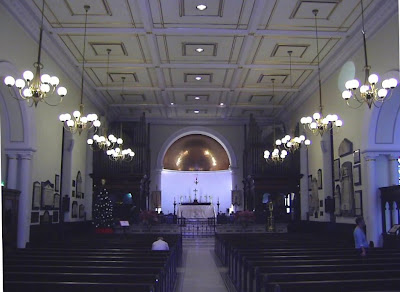 Constructed by convict labour, the Hyde Park Barracks became the principal male convict residence in New South Wales, providing lodgings for convicts working in government employment gangs around Sydney. Inside the tall brick walls of the barracks, convicts were mustered daily and marched to worksites around town. Their tools, equipment, food and clothing were also supplied by convicts, people who had been skilled in cobbling, weaving, carpentry before their deportation from Britain.

The barracks remained in active service until 1848, and now the building functions as an excellent museum of colonial Sydney.

St James’ Church, designed by Greenway in 1819 in the Old Colonial Regency style, was originally designed as a courthouse – a purpose revealed by two strange, non-clerical elements: the very large western gallery and the central positioning of the porch. The building wasn’t consecrated as a church until 1824, so clearly there were already Anglican churches in the colony. Nonetheless Gov Macquarie saw this church as one of the key elements of his town plan for Sydney and St James’ Church became the site in which the first Bishop of Australia was installed, in 1836.

The interior of the church, which today looks as it was following the renovations of 1900-1902, faces east. Note the sanctuary that is set within an apse with gold mosaic semi-dome. The sanctuary has marble and mosaic flooring, and is flanked by the organ and choir. The church connection to law and order is still celebrated today: the beginning of the legal year is marked with a church service attended by the Supreme Court justices, fully robed up.

He engaged an architect to produce a design for the building. When the plans for a two-storey building with two wings and a Doric portico were finished, Gov Macquarie sent the plans and a request for funds to Earl Bathurst, the Secretary of State for the Colonies in London. But funds were denied. 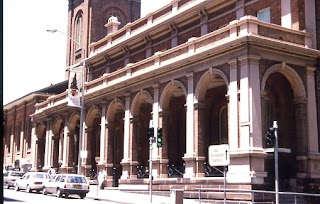 It was not until 6 years later, in October 1819, that Macquarie set the foundation stone of "a large and commodious court house' designed by Francis Greenway. As I mentioned, the site was at the western end of St James' Church! A guest at the ceremony was Commissioner John Thomas Bigge who had recently arrived from England to conduct a Royal Commission of inquiry into the colony.

Alas Bigge intervened and Macquarie felt he had to follow Bigge’s advice. Greenway set about converting the design for the court house and work proceeded. However the building was still incomplete when Macquarie left the colony in Dec 1821. Greenway protested to Macquarie's successor, Governor Sir Thomas Brisbane. But Brisbane would not debate architecture with an ex-convict. Thereafter Greenway's relations with officialdom went downhill, until he was dismissed from the Government service in 1822.

After his dismissal, Greenway strongly criticised the work being done on “his” courthouse. Apart from the circular staircase, the Doric portico at the western end of the building, the window treatment and certain recessed wall panels, quite a lot of Greenway's original design did not survive. Still, in 1824, the first Chief Justice of NSW read the Charter of Justice establishing the Supreme Court of New South Wales. The building itself was completed by 1828. 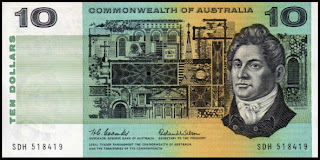 Greenway on the ten dollar note

Greenway’s architectural career in Australia, which started in such a flurry in 1814, was largely over in less than 10 years. He died in 1837, aged 59. Today he is memorialised on Australia's ten dollar note.

Great set of Greenway shots. I've photographed the Hyde Barracks and St James Church for my blog but haven't got a decent one of the court yet.
Regarding teh Botany Bay Hotel on my blog today, yes, I think it would have been a veranda or balcony originally. There's an old photo on the pub's website that shows a different enclosure before the most recent renovations to the facade.

Jim, thank you so much for reminding me.

I had crawled all over the barracks and church, and got lots of great photos. But I needed to create a link to your photo of the Music School. Many thanks

No worries.
Sydney - City and Suburbs

Fascinating, especially about Hyde Park Barracks - I had no idea.

Thanks - great information. I remember discussing Greenway at school, but if I learned then that he had been a convict, I must have forgotten it.
tff

I love to see Francis Greenaway's buildings when I'm in Sydney. Much of the architecture of the past was so elegant and distinguished. It's good to see that N.S.W. does a relatively good job of taking care of its heritage, unlike Queensland.

excellent work! thanks a lot for sharing :)

Others will be difficult to detect. For example, the Parramatta Female Factory's remaining buildings form part of the Cumberland Hospital. Dawes' Point Battery site was pulled down in the 1920s.

I just wish Greenway's architectural career in Australia would have lasted longer.

I am coming back to this topic in lectures next month. Not just to examine the Greenway buildings that still remain but also to examine why his career was so short. The politics of the colonial period in NSW were not easy.

Nothing has changed very much!

I can not find the appropriate word what I should use here but I feel just a curiosity to touch those creation. Anyway, I like them all and would like to thank to architect.

thank you twice. I agree. For a convict, Greenway was pretty damned impressive.

Thanks For sharing ! such a great information with us Interior Design Service in Sydney Architect Sydney .

Hi There - I am an amateur researcher for CAWB ( a grassroots protest group) at Windsor, fighting to save historic Thompson Square from a government plan to drive a huge modern concrete elevated bridge through the Square. As we build a narrative for the Square we have found the need to write also about Greenway's St Matthew's Church and his Court House. CAWB is itself at present before the Court bringing a case against the Government and the RMS. Thanks for your helpful input of knowledge about Greenway. The story of the Court House is significant for us Hawkesbury cornstalks - I have found many interesting stories. It is wonderful to have these two significant buildings in our town . I have taken some nice pictures just of the bricks in the walls of St Matthews and we found that the Court House appeared in an early movie shot in Windsor in 1911 called "The Romance of Margaret Catchpole". St Matthew's looks great in the light of early morning or late evening - the bricks simply glow from within.

I wish you luck. We have one of the biggest nations in the world, yet developers choose to develop land on one of the oldest, and most important public squares in Australia *groan*.

i love classic strictures.
Thanks for such posts.Eagerly waiting for your nest one...

A Forger's Progress: The Life of Francis Greenway has been written by Alasdair McGregor and published by University of New South Wales Press (2014).

The award-winning author scrutinises the character and creative output of a man beset by contradictions and demons. He profiles Greenway’s landmark buildings, his complex and fraught relationship with Governor Lachlan Macquarie, and his thwarted ambitions and self-destruction.

Very interesting. I had noted that Greenway protested to Macquarie's successor, Governor Sir Thomas Brisbane. But Brisbane would not debate architecture with an ex-convict. So I suggested that only then did Greenway's relations with officialdom went downhill.

Alasdair McGregor, on the other hand, believed Greenway was fortunate not have been dismissed from the Government service well before 1822!

It was really nice post! Thanks a lot for sharing…

Thank you for such interesting information. I'm also trying to find out more about the unique church flag flying outside Greenway's St James Anglican Church in King St, Sydney. I've been told it is the St James flag but can't find any reference to it or any similar flat to it online. Any help much appreciated!

Welcome aboard... very interesting question. I imagine that the flag depends on the event being memorialised inside the church eg a St Georges Day Service would fly a flag in honour of St George.

Hi! I've since found out about the flag ... it does have St George Cross on it, but it's actually a Bishop's flag unique to St James church.

It's a combination/adaption of the St George Cross and the symbol of Australia's first and only Bishop - Bishop William Grant Broughton in 1836 - and the bishop’s hat. You can see the imagery in the ‘bishops’ stained glass on the southern wall.


It is a very nice post. thanks for sharing!

Excellent post..Thanks for sharing with us.

I am delighted to have feedback from readers.