The unexpected locating of a famous painting, thought lost forever, is the sort of once-in-a-lifetime event that art historians dream of. And because the subject matter comes from the middle of the 17th century in Britain, I was even more riveted.

London blog described how Paul Delaroche's magnificent work King Charles I Insulted by Cromwell's Soldiers 1837 used to hang in Bridgewater House (built 1847-50).  At that stage, the Earl of Ellesmere had made Bridgewater House very special indeed. It was said to hold one of the finest private picture-galleries in England. 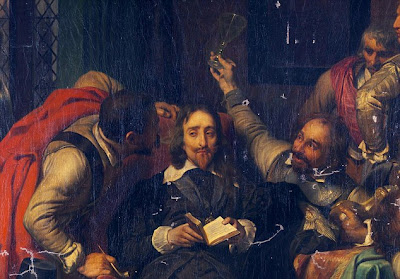 Delaroche, King Charles I Insulted by Cromwell's Soldiers, 1837
But this beautiful house in St James' Park became a near-ruin, destroyed by a bomb during World War Two. So it was always assumed that the painting was destroyed as well. In fact four of the duke’s paintings WERE destroyed.

But some unknown paintings were recently found rolled up in duke's Scottish home, Mertoun House, in the Borders. Tea at Trianon says that when the director of the National Gallery of Scotland asked to see these unknown paintings, they found the Delaroche, to the surprise and delight of everyone. It must have been taken to Scotland for safety, sometime after the bombing of Bridgewater House.

The King Charles painting is huge in both senses. Firstly the work is enormous, just under 4 x 3 metres. Secondly Paul Delaroche (1797-1856) was a major 19th century artist with a passion for important history scenes. He certainly spent time in Britain, studying famous English Old Masters. 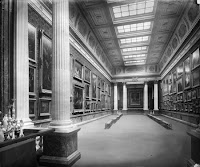 Bridgewater House gallery, before and after bombing


The Western Confucian understood that knowing mid 17th century history was important, if the viewer was to understand this painting. He said that Charles I of England's "last years were marked by the English Civil War, in which he fought the forces of the English & Scottish Parliaments, which challenged his attempts to augment his own power, and the Puritans, who were hostile to his religious policies & supposed Catholic sympathies." The Society of King Charles the Martyr, one of the Catholic Societies of the Church of England, was dedicated to and under the patronage of this monarch who held the distinction of being the only person to be canonised by the Church of England after the English Reformation. The Jacobite Heritage may be traced to the reign of Charles I, for the Jacobites of 1688 were the direct successors of the Cavaliers of 1642, as the Whigs were of the Puritans.
In the painting the King, who must have been aware that he was facing his own immediate demise, was casting his eyes contemptuously at badly-behaved Roundhead soldiers. The king was made to look dignified and the Puritans made to look like drinking yobs, reliving a Mocking of Christ theme. So one question remains for me. Whose politics was Delaroche reflecting?

The Composed Gentleman said the latest exhibition at the National Gallery also features the huge The Execution of Lady Jane Grey 1833, another tour de force by Delaroche. This second painting was also believed to have been damaged beyond repair in the 1928 flooding of Tate Gallery’s basement. When the curators found it again in 1973 and realised it could be repaired, it was sent off for major restoration. 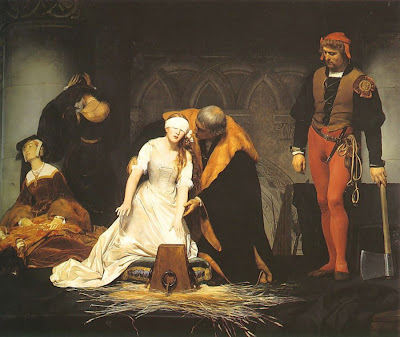 I haven't made a fuss of Lady Jane Grey because I have seen this painting published many times. But there were still some important British historical issues that Delaroche, a Frenchman, had to have been aware of. Firstly Frances, Lady Jane Grey's mother, was King Henry VIII's niece, so Frances was perfectly entitled to inherit the crown if King Edward VI died childless and Princess Mary was made illegitimate. Secondly Mary loathed Jane's vigorous Protestantism and had her beheaded as soon as possible as a religious traitor, as well as someone who usurped the crown. Delaroche's Jane died in a beautiful white silk gown, which Leanda de Lisle read as the sacrifice of a virgin martyr. But was she a virgin? And was she a martyr? Would civil war follow, if a Catholic queen came to the throne?

Representing London analysed some of the contradictions in Delaroche's Lady Jane Grey. She suggested Jane's youth and apparent benevolent intentions had been conflated with naivety and resignation to the will of others - casting her as a passive victim rather than a strong teenager. She confidently defended her right to rule over Henry bastard daughter Mary, and proved to be faithful to her religious principles until death.

So is it impressive that both of these large Delaroche works were unveiled, one complete with its shrapnel wounds, in late February 2010. They were part of a major “Painting History Exhibition” at the National Gallery which re-appraised the achievements of that French artist. I am grateful to Art Blog by Bob for noting that the Lady Jane Grey painting had been the sensation of the 1834 Salon Exhibition in Paris. Art history needs to be art-centred to be sure, but it also needs to be historical.
Posted by Hels at 10.6.10

The Cult of Elizabeth: Elizabethan Portraiture and Pageantry

Painting the Past: The Victorian Painter and British History

I'm not a great Old Masters fan but this is relevant:

I do so enjoy your posts.

How interesting. I have just finished reading an excellent social history of WW2 by Julient Gardiner and that mentioned how a lot of art works normally resident in London were dashed out into the country at the time of the Munich crisis - i wonder how much of them stayed there?
I love the Lady Jane painting and have often dashed into the National Gallery just to see it.

It is a pleasure to discover your blog.

Hope this isn't boring. I live not far from Corsham which had a huge underground city:

I'm sure one of the workers (in her 80's) mentioned art being stored there in WWII, but all I can find is the Tate Gallery works that went to North Wales.

Hannah and Hermes, many thanks.

You have both picked up on the issue of removing treasures during times of national crisis and putting them into a safe place.

The idea of a complete underground city seems fanciful. But at the time, it probably seemed like a very sensible solution to an unthinkable set of circumstances. And you have reminded me of something else. Remember the photos of Eisenhower and the Monuments Men finding underground caches of precious art works?
http://www.monumentsmen.com/blog/wp-content/uploads/2010/04/Generals.jpg

I was familiar with the Lady Jane Grey picture, but not with the Charles II. The latter reaffirms my admiration for Delaroche.

In my own (very) small way we have considered what we should do if things went seriously wrong in Bangkok. Having begun to collect pictures of some importance, we wondered whether we should remove them. It's only a microcosm of what happened in the war years, but an interesting comparison for my own current thinking.

This gets more and more interesting as they are still working and have a fascinating web site:

A huge area - thanks for raising it.

Hermes, great stuff isn't it? I often come back to the question of stolen art in this blog. Even now the work of the Monuments Men makes my eyes widen: see http://melbourneblogger.blogspot.com/2009/09/plunder-of-arts-monuments-men.html.

Columnist, you really DO need to consider what you should do if things went seriously wrong in Bangkok. It is not a little thing. I would put everything you truly value into storage in another country and insure it. As I found in all my stories on "stolen art", it is almost impossible to get the items back, after the conflict had ended.

Thanks Helen - I must catch up with more of your former posts. What came to mind is another slight variation on lost art:

To piggy back on the idea of sending art into the countryside in order to keep it safe. After Napoleon's surrender in 1814 the Coalition Allies permitted the French to keep most of the art they had looted during the previous decades. But after Napoleon's second defeat, at Waterloo, at the Second Peace of Paris in November 1815 they were more in the mood to punish the French. It was decided that looted art had to be returned. When it came to removing the four horses that the French had stolen from Venice (and the Venetians had stolen from the Byzantines 600 years earlier), it caused a riot among the art loving French - the French didn't riot at the decision that they would lose land, nor at the decisiion that they would pay an indemnity, nor at the decision that they would host a foreign army of occupation - but giving back the priceless horses was too much. Meanwhile, the authorities in the Louvre had gotten word of the decision and had quietly removed hundreds of paintings that had been looted from all over the continet and secreted them in small provinical towns. Eventually the Coalition Allies gave up looking for the missing works. That is why the provinical city of Lille today has such a stunning collection of paintings.

Hels, this is so fascinating to me because of the significance of the Delaroche works of art. I don't remember when it was, however the documentary of the Monuments Men was astounding!

Mr Doolan, putting away a family's treasures, or a nation's treasures in time of conflict is very sensible. Especially during and after the Napoleonic invasions of Europe, as you rightly say.

There are two other prime examples I can think of where art was targetted (either to steal or to destroy):

1. Queen Christina of Sweden told her army generals not to bother looting rubbishy artists.. just to go for the very best artists (she supplied a list of "desirables" for every country her army went into). And

2. The Franco-Prussian War where the German soldiers stabled their horses in Impressionist art studios and used the canvases to line their pig troughs. Pissarro, for example, lost every painting he had stored in his studio :(

What an exciting discovery! I love when supposedly lost paintings are rediscovered. I really like Delaroche's work, too. I noticed on the Telegraph article from last year that the future home of this Charles I painting was undecided (at the time of the article's publication last November). I wonder if any decisions have been made since last November.

M. unfortunately your link doesn't work but until a few weeks ago the Charles I was ondisplay in the UK National Gallery:

Very informative post. The discovery of Delaroche's painting is indeed quite exciting! The depiction of the execution of Lady Jane Grey is well, very gruesome and sad and I just wish that no body ever has to die in this manner.