Two of the finest old theatres in Australia have very similar histories. Theatre Royal in Hobart (1834) and Her Majesty's in Ballarat (1875) are in different states and belong to different decades, but they both carried the cultural hopes of their backers in the earliest days of Australian society.

In 1834 a consortium of Hobart Town’s business leaders was formed with the aim of establishing a permanent theatre for the rapidly expanding colony. Hobart Town must have been a rough old place in colonial days, so their leader brewer Peter Degraves asked the architect, John Lee Archer, to make the new Theatre Royal gorgeous. The foundation stone was laid in 1834 and it was up and running in 1837. Thus Hobart has the honour of being the oldest continually operating theatre in Australia. 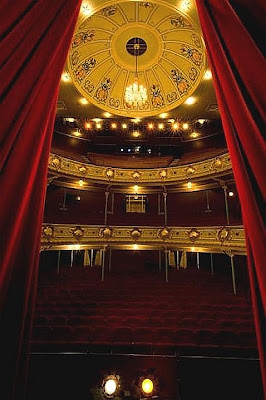 Did the good burghers of Hobart Town mind that the theatre was placed between pubs, brothels, an abattoir, tanneries and tiny dock workers’ cottages? Apparently not, since it was given an impressive neoclassical façade and a charming interior (rebuilt after destruction by fire in 1984).

However there was a price to pay. The entertainment ranged from traditional music hall to nasty cockfights. Worse still, the theatre’s own history tells, a sleazy tavern operated beneath the auditorium. Prostitutes, sailors and general riffraff would enter the pit with tankards full and create all sorts of drama of their own, much to the displeasure of the gentry in the boxes. During intervals, drunken prostitutes could be seen bounding across the seats, heading to the conveniences as fast as they could. There were 3 entrances to Hobart's theatre; a grand front entrance for the well heeled, a door off the side lane for ordinary working families and a tacky entrance from the basement pub that opened directly into the cheapest seats.

The addition of the gallery in the 1850s and new decoration to the auditorium in the 1890s made the site attractive. The finest renovations started in 1911 when new balconies were added, the front entrance enlarged and plush red velvet upholstery appeared for the first time. The crème of the entertainment world have trod the boards in the Theatre Royal including Noel Coward, Vivien Leigh, Laurence Olivier and Sybil Thorndike.

Saved from demolition several times, the theatre survived fires, a call to demolish the building during WW2 and decades of wear and tear. The worst threat came in the late 1940s; it was then that Sir Laurence Olivier was among the many to try and save this Hobart institution. Again, when devastating fire in 1984 destroyed much of the stage area and the front of the auditorium, closure seemed imminent. A fundraising appeal was launched to raise the $1 million needed to carry out repairs. The money was raised and the theatre underwent major reconstruction and refurbishment, reopening in March 1986. Today historians love the Theatre Royal, but so do fans of the performing arts.

Ballarat's Her Majesty's Theatre was first known as the Academy of Music, a name that avoided the rather bawdy associations involved with "theatres". The Academy had a flat floored auditorium suitable for dances and dinners, and a fully equipped stage. It was built in 1875 to supersede Ballarat's Theatre Royal, around the corner in Sturt St. While very grand, the Royal had become outdated and no longer met the technical requirements of the touring companies. 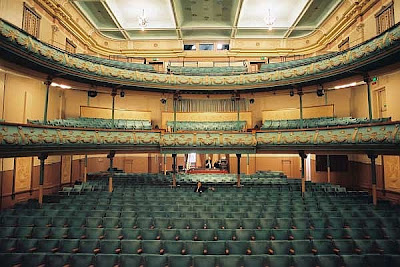 The Academy was built by an important local family, the Clarkes. Well-to-do citizens wanted Ballarat to be seen as a cultivated regional city, not a gathering place for drunken yahoos. In return for building a prestigious theatre, Sir William Clarke had a guaranteed tenant.

The building of the new theatre was supervised by Clarke's architect, George Diamond Browne. Opened in June 1875, the first production was a comic opera by the French composer Lecocq, La Fille de Madame Angot. It was presented by the Royal Opera Bouffe Company which was run by WS Lyster, Australia's first opera impresario.

Soon after the Academy opened, the large supper room above Lydiard Street was leased to a successful miner who ran it as an art gallery, displaying an excellent collection of European and Australian art-works, including his own tapestries. Within a few years, the Ballarat Fine Art Gallery opened for business (in 1883) and used the supper room as its main display space. Only in 1890 did the art gallery move to its new and permanent home in Lydiard St.

Every famous performer who made his/her way to Ballarat from across Australia and Europe performed at Her Majesty’s. Dame Nellie Melba and the Russian Ballet were the most famous, of course. But when I went on a guided tour of the theatre this May, the guide spent some time showing fabulous posters from the Theatre's Archive Collection on the supper room walls. 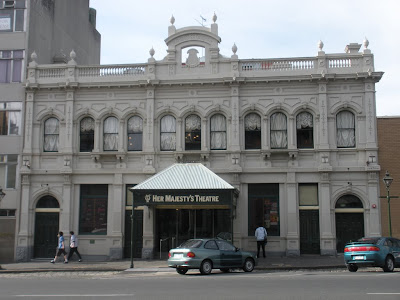 When Clarke died in 1898, the theatre might well have been sold and destroyed. Fortunately the building was bought by a local consortium, with a view to creating a better, more modern facility. The new owners commissioned Australia's leading theatre architect, William Pitt, to remodel the interior and improve the stage facilities. Pitt, who had worked under Diamond Browne, also designed Melbourne's Princess Theatre. The present layout of the auditorium with sloping floor and double balconies, is Pitt's creation. Wealthier families sat in the splendid comfort of the balconies; the great unwashed sat in the squashier, less padded seats on the ground floor.

Paterson also decorated the dome and proscenium arch with murals. The open dome was removed in 1907 for fire-safety reasons, and was restored only recently in a permanently closed state. The Dress Circle Lobby also dates from 1907.

From WW1 on, the Theatre was increasingly used for cinema presentations. A projection room was built above the dress circle in 1916, and during the silent movie era, a theatre orchestra (or sometimes just an organ) provided the film accompaniment. The theatre was wired for sound in 1930.

Live performances did continue during the cinema years. My personal favourites in the early 1950s was for the annual panto(mime) and then, increasingly, the Theatre was used to stage locally produced musical comedies.

But nothing could overcome the allure of television. No organisation could afford to maintain the upkeep of the building well, so it was given to the City in 1987. The City paid for a major modernisation and reopened Her Majesty's in 1990. The present colour scheme is a recreation of the interior decoration found on wall paper, underneath 100 years of wear and tear.

I'd love to visit both of them! They look like beautiful theatres.

I was surprised that cockfighting was allowed, even in those days. I thought that it would have been illegal by then.

Viola some very weird entertainments were on offer, some on stage, others not.

In one famous Melbourne theatre in the latter 19th century, some of the side seats were set aside as working brothels, curtained off with flimsy material. The clients had to promise not to yell loudly and they had to keep their boots on, for a speedy get-away.

It reminds me a bit of south London after Shakespeare's time - rough, ready and not under the minute-by-minute control of the police.

Fascinating. The design of the first one reminds me of the Theatre Royal in Bath, but the (published stories at least) are not so interesting!

I love these grand old buildings. Although it's younger, the Orpheum (1927) in Vancouver is a grand old vaudeville/movie theatre that, fortunately, has been refurbished and is owned by the city.

Chris, I bet that Vancouver was also feeling a bit young and a bit brash, and wanted to show that they too could be very cultured people. Both the Pantages Theatre 1908 and the Orpheum 1927 were lovely.

Considering we are a very young country, I think we can be very proud of our heritage buildings and the magnificent cultural inheritance that we have accumulated in a very short period of time!

Hermes and Nicholas, Australia was indeed a very young society when these theatres were designed and built.

Bath is a great example, especially when society first started moving to Bath - they created new facilities in the 18th century. The people who followed Beau Nash in 1800-6 must have been delighted with the Theatre Royal. I wish I had been around then.

I've had dinner in Beau Nash's house in Bath:

and I agree with you - not a bad time to have lived.

Since the 1990 restoration, the old doors have been removed (by stealth, at night) and glass-wall sliding doors installed.
criminal.
Joan Batman (at Walking Melbourne, from where I followed your web link)

Ah! Her Majesty's! memories of hour after hour, day after day, sitting watching little girls and the occasional boy tap-dancing at "The Comps" in the South Street Eisteddfod.

Peter,
you are quite right - many thanks. I don't know if it was simply a typo on my part or wishful thinking on the tour guide's part that Ballarat's theatre could be almost as old as Hobart's theatre.