Melbourne's classiest post-code was always, and still is Toorak. You need to know that.

Edzell House, one of Toorak's grandest mansions, was superbly located on a very well elevated site on the southern bank of the Yarra River. It was originally designed by the architects Reed, Smart and Tappin in 1892 for the owner James Cooper Stewart (1836-1919). We know that Joseph Reed was one of Melbourne's most distinguished architects; he was responsible for many important buildings, including the Public Library, Melbourne Town Hall and Rippon Lea. But James Stewart was no slouch himself. He was a prominent Melbourne lawyer, alderman of the Melbourne City Council and a mayor during the 1880s. 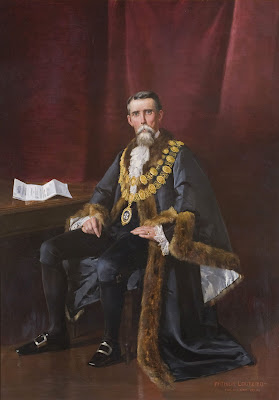 Edzell was a red brick house with extensive half-timbered gabling, sometimes described as the Queen Anne Revival style. But I don’t find "Queen Anne" a totally useful style label for Australian architecture. So it might be more helpful to say Edzell was a transitional house, no longer Victorian and clearly predictive of Australia's own Federation style in the early C20th. The house had pattern tiles and terracotta ridging and two asymmetrical corner towers, with turrets, facing the river. You can see the prominent red brick chimneys with terracotta tops in the photo. The splendid dining room featured panelled timber ceiling and dado, embossed floral pattern wall paper and a panelled, carved timber mantel. 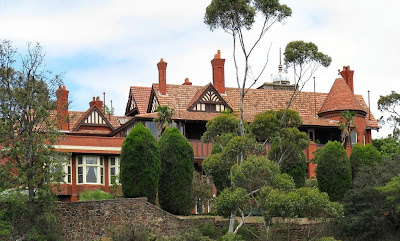 In 1916 George Russell bought the house. Within a year the noted Arts and Crafts architect Walter Richmond Butler designed extensive but sympathetic external additions and a garden for Russell. A large ballroom was added, and this continued the Tudor manner with its panelled ceiling and dado. The main veranda was replaced with a half-timbered patterned brick balustrade and on the south the original gables were extended in the same pattern over a new brick veranda. By the end of WW1, there were more than 30 rooms in this mansion, some of which you can see.

Dame Nellie Melba (1861-1931) was the first Australian to achieve international recognition as an opera soprano. In 1887 Melba had made her Covent Garden début, without a raging success. But once she took the role of Donizetti's Lucia in 1888, the world was hers. Back home in Australia, she was bigger than our most famous race horses; bigger even than football stars.

In 1909 Melba bought property at Coldstream, a small town outside Melbourne, and she had Coombe Cottage built within a few years. Melba also set up a music school in Richmond which she later merged into the Melbourne Conservatorium. It is interesting that of all the architects in Melbourne, she selected Walter Butler to design her Italianate lodge and gate-house at Coombe Cottage. Presumably she saw Butler’s renovations at Edzell and gave him the commission.

It would be interesting to know who invited the elderly Dame Nellie Melba to give small concerts in Edzell’s splendid music rooms during the 1920s and why she agreed. The house was located on an elevated site which is one of the most outstanding on the south bank of the Yarra River. Its impressive vistas were complemented by Butler's extensive and lush garden, some of which you can still see in current photos. Perhaps Dame Nellie Melba loved the heroic scenery. 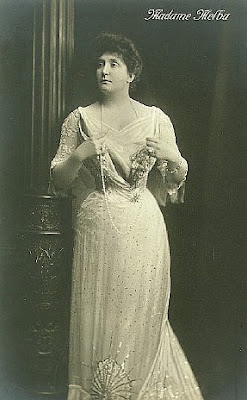 The next owner of the mansion was Mrs Rose Krantz, mother in law of the famous pianist Jacob Jascha Spivakovsky 1896 -1970. Jascha and his even more famous brother, violinist Nathan Tossy Spivakovsky 1906-98, had been learning music and playing in Berlin, while the Krantzes were safely settled in Australia. In 1930 the brothers and cellist Edmund Kurtz formed the Spivakovsky-Kurtz Trio and happened to be on a musical  tour of Australia in 1933 when the Nazi Party took power in Germany. Needless to say the two brothers did not return to Europe, plus they managed to get their two other musical brothers to Australia later in the 1930s. Australian culture was deeply indebted to this migrant family.

When Jascha inherited Edzell from his parents in 1948, other famous musicians gave concerts there. The historicised English architecture made the house perfect for concerts, both acoustically and thematically. Somehow Spivakovsky had the musical genius to entice them to his home.

Edzell House retains many of its original features including rich timber panelling and delicate lead lighting. The grandest of rooms, eg the dining and music room, are still intact. The gardens of most other large C19th houses have either been redeveloped or substantially reduced in size, but not here. Heritage-listed Edzell House has been listed for sale by Jascha Spivakovsky’s architect son, Michael.

Dame Melba had an amazing voice:

Dame Nellie Melba was big in everything she did, Hermes. Great voice, as you say, and she also dressed like a dream, married an aristocrat, was the long term lover of another aristocrat (Philippe, Duke of Orleans), travelled the world many times, much admired by British royalty, was half responsible for the fabulous Melbourne Conservatorium, received Dame Commander honour etc etc.

We are so lucky in Melbourne to have such splendid architecture and art to gorge ourselves on...
For a nation with such a history, we have much to be proud of, including such shining stars as Dame Nellie!

Nicholas, agreed. Dame Nellie Melba was a once-in-a-generation star, as famous overseas as she was at home.

And I particularly liked the way she changed her real name, Helen Porter Mitchell, to a stage name that indicated pride in her home town - Melba.

I love listening to Dame Melba. The house and gardens are amazing.

I can't tell you the experience of discovering your photos of this beautiful house where I spent many years of my childhood studying piano with my beloved teacher, Jascha Spivakovsky, till he passed away in 1970. My brother studied the violin with his brother, Tossy. Thank you for posting this history.

I learnt piano here too, from Jascha's son Michael!

Helene and Mikki,
what great luck you both had, learning music from the Spivakovskys AND enjoying the house and gardens at Edzell. If it was your parents' decision to send you there, well done them!

ChrisJ, you must come to visit :) The nicest time to come, in terms of outdoor concerts etc, would be December to April inclusive.

The house looks nice, but not overdone. I wonder if anyone has ever documented the important houses of Toorak? Given how many apartments can be fitted onto your average Toorak house site, I hope so.

I haven't been through the interior (except for the reception areas where the concert was) but I have definitely been around the exterior. The gardens of most other large C19th houses were broken up and sold off long ago, but have a look at Edzell's gardens and river frontage:
http://tinyurl.com/3e8q8ez

My favourite website for architectural history in Melbourne is Walking Melbourne at http://www.walkingmelbourne.com/
The forums for questions and debates are also excellent.

The Age today (17/11/11) noted that Edzell has again come on the market. For excellent photos of the interiors, see
http://theage.domain.com.au/best-address-historic/the-house-dame-nellie-sang-in-20111116-1nih2.html