Andrew Banjo Paterson (1864–1941) was probably Australia’s best known bush poet. He wrote many ballads and poems about Australian life, focusing particularly on the Outback that he knew well from his own life. I learned the words to his works, Waltzing Matilda, The Man from Snowy River and Clancy of the Overflow off by heart in primary school in the 1950s. I wonder if children still do that today?

The major public outlet for Banjo Paterson in the 1880s was the newly established Bulletin magazine, published weekly in Sydney. The Bulletin was then a racist and right wing publication but it had two redeeming qualities: it supported trade unionism and it sought out quality Australian writing. When Paterson wrote The Man from Snowy River in 1890, its publication in The Bulletin ensured this poem would reflect and inspire the heart of the nation.

The terrible descent after the colt

The poem told of a horseback chase to recapture the valuable colt of a valuable racehorse. The colt had escaped from its paddock and was living wild with the brumbies of the mountain ranges. Eventually the brumbies descended a very steep and treacherous slope, at which point the assembled riders wisely gave up the chase. Only one young hero spurred his pony down the terrible descent to catch the mob. The first three stanzas of the poem will set the scene:


There was movement at the station, for the word had passed around
That the colt from old Regret had got away,
And had joined the wild bush horses — he was worth a thousand pound,
So all the cracks had gathered to the fray.
All the tried and noted riders from the stations near and far
Had mustered at the homestead overnight,
For the bushmen love hard riding where the wild bush horses are,
And the stock-horse snuffs the battle with delight.

There was Harrison, who made his pile when Pardon won the cup,
The old man with his hair as white as snow;
But few could ride beside him when his blood was fairly up
He would go wherever horse and man could go.
And Clancy of the Overflow came down to lend a hand,
No better horseman ever held the reins;
For never horse could throw him while the saddle-girths would stand
He learnt to ride while droving on the plains.

And one was there, a stripling on a small and weedy beast;
He was something like a racehorse undersized,
With a touch of Timor pony—three parts thoroughbred at least
And such as are by mountain horsemen prized.
He was hard and tough and wiry—just the sort that won't say die
There was courage in his quick impatient tread;
And he bore the badge of gameness in his bright and fiery eye,
And the proud and lofty carriage of his head. 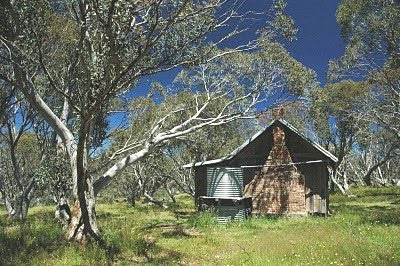 A bush hut that could provide shelter for the horsemen, if necessary

Paterson’s timing was perfect. Australia was still a cluster of colonies under the British crown, and would not achieve independent nationhood until the turn of the new century. Yet by the late 1880s and into the 1890s Australians were already seeking a distinctive national identity. The Man from Snowy River reminded urban Australians of the unique land they were part of and introduced them to the characters and animals of the hot, dry, unBritish countryside. Coffee With Allan Cockerill said although most of the population were and are still urban dwellers, there was still a strong link and identification with bush culture. I would add that Australians who had never in their lives seen a shearing shed or shod a horse, now saw in the Man from Snowy River qualities that would epitomise a brand new nation.

Most Australians have at least visited the Snowy River with its headwaters in the Snowy Mountains, beautifully described by Mike Down Under blog. Being in the Great Dividing Range in Victoria near the New South Wales border, it can be a very cold place in winter. And while the location of the ride in the poem is left unspecified, a number of towns claim to be the original site, including Corryong.

Paterson became a war correspondent for The Sydney Morning Herald and The Age during the Second Boer War, leaving for South Africa in late 1899. He was one of the first war correspondents to write from the actual war zone, sending off graphic accounts of the surrender of Bloemfontein and the capture of Pretoria. When WW1 started in 1914, he became an ambulance driver with the Australian Voluntary Hospital in France.

One of the great films made here when Australia had an impressive film industry was The Man from Snowy River, made in 1920. This silent black and white film was closely based on the Banjo Paterson poem. Today he is honoured in films and plays, as described by Exploded Views blog, but is best known by being the face of the Australian ten dollar note. 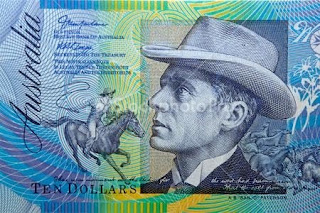 Paterson on the ten dollar note

What a good post - fascinating. I used to sing Waltzing Matilda at school here in the UK but knew nothing about it.

Thanks so much for this interesting post. Yes, all most Brits know of Paterson is 'Waltzing Matilda'. I first came across Clancy of the Overflow (who seems to have got snipped out of the second stanza in your post, by the way) in Oxford about 30 years ago when I heard an Australian friend of a friend recite 'Clancy...' from memory. I'll never forget this demonstration of the power of recited poetry and this revelation of the power of what was then, to me, an unknown poet's work.

Thanks, you two. Timing is everything in history, is it not? Had Banjo Paterson written Man From Snowy River 20 years earlier, it probably wouldn't have been published. Had it been written 20 years later, Federation would have been done and dusted, and the impact of the nationalist sentiment would have been largely diluted.

This post was very interesting, Hels. It's such an exciting and moving poem - I'm glad that the timing was right! I think that it means a lot to all Australians - I hope that students at least read it at school.

Great post! We know him well here in New Zealand. Of course we could have been part of your federation but Premier "King Dick" Seddon turned you down. We went on our own, mainly due to distance and lack of communication being one of the reasons, and of course Seddon's own political ambitions.

The discussions had been going on at the highest level throughout the entire 1890s. Yet the big historical events seem to be random.