The Cresta Run is an ice run, 1.5 ks long, that winds its way from above the Leaning Tower in St Moritz, Switzerland. It follows a path down a steep gully and through 10 tricky corners, past the tiny village of Cresta, to the village of Celerina. But even races have a history, so how did The Cresta Run come about? And why am I, an Australian who becomes depressed whenever the temperature drops below 18c, interested in snow sports? 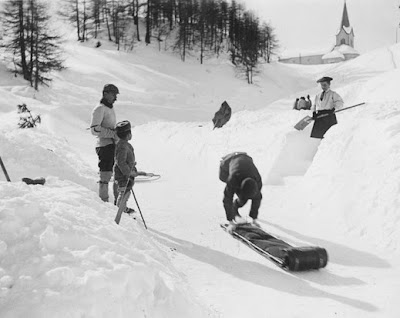 Apparently Johannes Badrutt, owner of the Engadiner Kulm hotel in St Moritz, made a bet with four English guests in September 1864. The hamlet was a popular summer destination for both sporty or sickly Britons, so Badrutt’s task was to convince his guests that winter in the Alps was just as attractive as summer. If they returned in December they could stay as long as they liked at his expense and if he were wrong he would reimburse their travel expenses. According to Johnny Scott in The Field, the Englishmen loved it and returned home to spread the word that winter in the Alps was an experience not to be missed. Thus the Alpine winter season was born, as was a warm Anglo-Swiss relationship.
In 1883, the English literary critic John Addington Symonds founded the Davos Toboggan Club and organised the first international races, along with a week of balls and dinners. Realising that Davos had stolen a march on St Moritz, the good burghers of St Moritz enlisted the help of Peter Badrutt, Johannes' son, who was now running the enlarged Hotel Kulm, to build a toboggan run.

The committee had their boots protected and arms linked, trudging time and again along the marked line, until the snow was trampled down for the frost to harden. They had marked out a course following the contours of the valley from the Hotel Kulm, past the hamlet of Cresta to the outskirts of Celerina, and when the snows arrived in November, they began on their mammoth task. The first run, which took over two months to build, was completed in January 1885. It dropped 157m in total.

The Run was a scary affair down which people careered down the slope, sitting upright on their sleds and steering with their wooden picks.  Fortunately improvements arrived quickly. One bloke astonished everyone by lying head-first on his toboggan to ride the 1887 Grand National, a position adopted only by men in 1888. In any case, women were completely banned from the race in 1929. 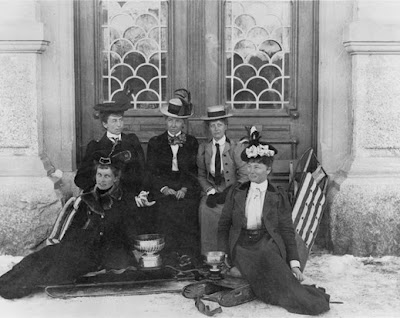 The Cresta Run committee and the winner's cup
*
Open from Christmas until the end of February, the Run is still hand-built from scratch every year, actively supported by the St Moritz town council. It follows the original route and is largely the same as the 1885 construction, although the athletes travel faster now. In 2010, St Moritz Tobogganing Club will be celebrating the 125th anniversary of The Cresta Run with parties and dances. A 12-piece Bavarian oompah band will provide atmospheric music.
I am always delighted to read histories of the various Olympic Games and histories of the individual sports. But even more relevant to this month in Vancouver,  Winter Olympic Tickets blog and Miss 604 blog both say that modern sport of skeleton grew out of The Cresta Run.

Hi Helen,
I loved reading your account of this run which is not so faraway from my neck of the woods. I must admit I didn't know this run, so thanks for informing me. There is a big I have seen in the shops here in Switzerland called "How The British Made the Alps" by Jim Ring (John Murray, 2000. Now I feel that I should really get myself a copy and read it because I'm, sure it is a fascinating history.

Hey, what an interesting post for this old Kiwi to read.Keep them coming.

Terrific... I am a teacher at the European scool Luxembourg and and with pupils we've been following the Olympics and as a Brit i made quite a story about Amy Williams gold in the skeleton. I will do further study and feature your story...definitely

Thanks everyone. Just because a sport is hair raising and probably lunatic, does not mean its history is not fascinating. Especially since the surrounding social history is also worth knowing.

Mr Doolan, the question of the British Swiss connection is worth following up. Apparently the first ski tour in the Alps took place in 1894 when some Swiss lads teamed up with Sir Arthur Conan Doyle, crossing from Davos to Arosa. Conan-Doyle's wife had TB and they were living in the area at the time, hoping the clean air would cure her disease.