Here is another amazing female botanical artist in the tradition of Marianne North and Marian Ellis Rowan.

Berthe Hoola van Nooten (1817 - 1892) was the daughter of an Utrecht vicar. There is little on record about her young years, except that she was already fascinated by natural science and particularly skilled at flower painting.

In 1838 she married Dirk Hoola van Nooten. After their marriage, the couple travelled to the Dutch colony of Suriname in South America, where Dirk Hoola van Nooten worked as a judge. Berthe often travelled between Suriname and Batavia (now Jakarta) with her husband, and it was during these travels that her interest in botanical plants and painting grew. The records show that she sent cultivated plants back to botanical gardens in the Netherlands. These specimens were collected on trips through Suriname and Java with her husband.

Only nine years after her marriage and with five young children, van Nooten’s husband suddenly died in 1847, leaving her with large debts and a large young family. Unable to pay for the family’s journey back to the Netherlands, the young widow decided to take advantage of her compulsory banishment. Aware of the great interest in Europe for lavish illustrations of exotic fruit and flowers, she decided to produce watercolour plates depicting interesting plant species from Java. Would she have bothered creating professional works, had she not been so pressed financially? Probably not. 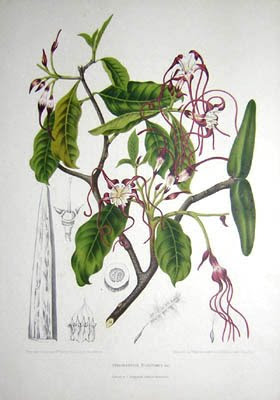 After returning home to the Netherlands, she tried to get her watercolours publish but failed. It was only through the intervention and eventual patronage of the Netherlandish Queen Sophie Mathilde, who strongly supported the arts, that Berthe was finally able to get a selection of her paintings published in 1864. Queen Sophie, wife of the Dutch King William III, was no intellectual slouch. She corresponded with several European scholars, protected and stimulated the arts and supported her favourite causes, including the construction of public parks. But the records don’t say how Berthe came to the Queen’s attention.

The forty large plates in the book "Fleurs fruits et feuillages choisis de l’ile de Java" were printed in Belgium from Van Nooten's original sketches by the Belgian lithographer Pieter Depannemaeker, using the new technique of chromolithography. The exquisite colour-plates, often finished by hand, depicted a range of Java’s tropical splendour; its indigenous and introduced flowering trees, shrubs, decorative flowers and plants with edible fruits. Each brilliantly coloured plate was accompanied by a description of the plants and their culinary, medical and other uses in French and English.

BibliOdyssey blog has beautiful versions of some of the fruit illustrations. Botany Photo of the Day blog has an exquisite flower I have never seen before: torch ginger which was native to Indonesia, Malaysia and southern Thailand. Visual Creative blog saw the arts works of famous Victorian women and dreamt of becoming a specialist in botanical illustration.

Van Nooten managed to accentuate the splendour of each species by adopting a style that combined great precision and clarity with a touch of neo-Baroque exuberance, revelling in the rich forms and colours of the tropics. Cynometra Cauliflora/Nam Nam for example, is native to South East Asia and is a small tree having a knotted trunk yielding edible light brown or greenish yellow flowered fruit. 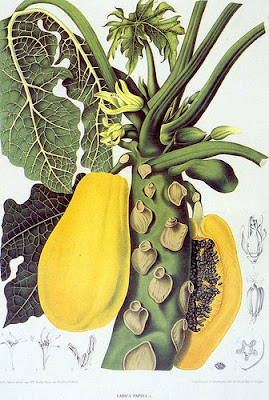 Despite three editions of the work being published during her lifetime, Berthe Hoola van Nooten died in poverty in Batavia in 1892. So how did copies of the original publication get into Australian libraries? Apparently the books were acquired from Daphne van Nooten whose late husband was the artist’s great great nephew. Published some 16 years after the first edition, the 1880 editions held by the 3 Australian libraries (National Library of Australia in Canberra, State Library of Victoria and University of Melbourne’s library) is regarded as an improved edition. In acquiring this publication, the libraries were aware of another C19th female artist whose work complemented those already held in Australia.

The Tropenmuseum is an anthropological museum located in Amsterdam and established in 1864 in order to show the Netherlands’ overseas possessions. The museum, operated by the Royal Tropical Institute, uses visual arts and photographic works for its exhibitions.  Its two beautiful portraits of our artist are in the permanent collection.

Two recent specialist exhibitions should be noted. In Washington DC, Illustrating Nature: Three Centuries of Botanical Prints showcased the tremendous contributions women artists made to the development of botanical art from the C17th onwards. The 2001 exhibition, organised by the National Museum of Women in the Arts, featured 50 prints and four books by British and European artists. The illustrations of artists who completed works while travelling abroad make up a significant part of the exhibition, including Berthe Hoola Van Nooten. 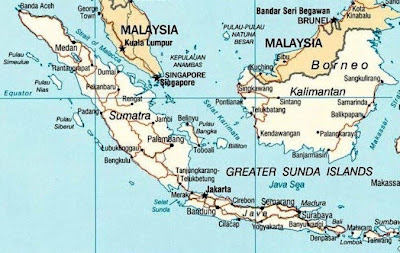 Studio Botanika NY specialises in botanical and natural history prints from 1700 on. They are having a very special exhibit showing the work of women botanical illustrators, including Berthe Hoola van Nooten. They noted that it was typical for many women artists to sign their work only as: 'by a lady.' Victorian women were modest, reserved and not self-promoting; thus their contributions, however great, were rarely recognised. Those who did illustrate professionally were typically underpaid. However the time was right because, during the Victorian era, exploration became so common because the elite of society craved the most unusual plants. Plant breeding exploded, and vast conservatories were constructed to hold the plant oddities.

The Bluest Blue has a gorgeous botanical print by Augusta Innes Baker Withers (1792–1869). Now I must look for any published material about Ms Withers.

Must admit my ignorance and say that I hadn't previously heard of Berthe Hoola van Nooten. Thanks for the intro - such wonderful illustrations.

I am so enjoying the women botanical artist theme, thanks Hels! Learning lots from your posts :-)

Mike and ramidonya, I know Marianne North and Marian Ellis Rowan very well indeed and often see reproductions of their work. But I too would not have known Berthe Hoola van Nooten, had the the 1880 edition of her work not got into my local state library.

Imagine being in a foreign country with no husband, no income and five toddlers to care for. The woman was heroic.

Hels, writing personal blogs is easy but writing about history is a tough job.
I appreciate your efforts.
I wanted to introduce you to meamwye's history blog:
http://www.shininghistory.com
she is also a member of blogcatalog:

Thanks for your post. I have just found out that I am a far descendant of Berthe Hoola van Nooten. I would be very interested in the whereabouts of some paintings of her and her husband. The paintings were done by M. Calisch. My great aunt donated the painting of Berthe to the Tropical Institute in Amsterdam. But there must be a similar painting of her husband and one of them together, which (according to the same aunt) came in the posession of the Australian side of the Hoola van Nooten family. How to bring back the three paintings together ? Any ideas ?

Jonathan, sorry I have not heard of any individual paintings outside the scope of the published book. In fact I thought Australia was very fortunate to have the three original publications of the book.

But it would be worth your while writing to the National Library of Australia, in Canberra. They will have their acquisition details on Daphne van Nooten, whose late husband was apparently Berthe’s great great nephew.

As BPH Van Nooten-Van Dolder is related to my family I have much more biographical information. Consult also the site of Tropenmuseum
in Amsterdam there is an extensive biography (not always correct)
Your biography is in parts incorrect

I am very pleased to hear from you. If you have some suggested changes, I will most certainly make them. Particularly if the corrections concern Berthe Hoola van Nooten's splendid art.

My family has some famous literary and musical figures, but not a single soul who worked in the art world.

Hels,
Dirk and Berthe started a female seminary related to the Protestant Episcopal Church in New Orleans in 1846/47. Dirk died in 1847 from yellow fever. In 1854 Berthe moved to Galveston with a boarding school for young ladies. She could not pay the debts and moved with her half-brother Vincent Jacob and his paramour Helena Cruickshank to Batavia.That was the first time she came there. The site of the Tropenmuseum has two beautiful paintings of her. There should be a painting of her husband Dirk with Hoola van Nooten descendants in Australia. Does anayone know where it is?

I don't know of the painting in Australia of Dirk and Hoola, but start your search with the National Library of Australia at
http://www.nla.gov.au/pub/gateways/issues/98/story09.html
They may be able to help.

Re Tropenmuseum, I will add that reference to the post immediately. Again thanks

Together with a co-autor I am working on a biography of Berthe. We are closely working together with the tropical institute. We already have more than 200 dated events, but still missing links.
Busken mentioned much more biographical information. We would very like to come in contact to exchange information and complete the missing pieces.
Kind regards, Marcel

What a worthwhile project...I hope you and your co-author have a great deal of success. I don't know Busken's email address but he/she may see your comment and may get into direct contact with you, or with me. I hope so.

There is nothing wrong with writing personal blogs, but my time is limited and I don't want to waste my precious leisure time on anything but history, travel, architecture, fine and decorative arts etc

I just came across this site and would like to add that I am descendant of Berthe Hoola Van Nooten. My mother knows a bit of the history as she has the family tree. The artworks are incredible. I am thrilled as an art teacher myself that someone has discovered this incredible women - thank you.

You are so fortunate having a talented relation... I wish it was me.

Thank goodness for blogging. Even experienced art historians tend to know much more about Dutch artists from the 17th century than they do about relatively modern Dutch art. Especially women artists.