Charles Célestin Jonnart became the French governor in Algeria in 1903. For him, the authority of French colonisation needed to be reflected in the architecture of Algier’s most important buildings, places with which the French administrators, business people and Pieds Noirs ex-pats could identify.

Architects J Voinot and M Tondoire were asked to design a public postal and telephonic institution that would serve this part of the French empire. Normally I suppose a post office would not thrill the hearts of citizens and tourists, but this building really was the centre of turn-of-the-century modernity. And to show you how central to the French empire this building was to be, you could have once found a Joan of Arc statue near by (although it was later moved to France). 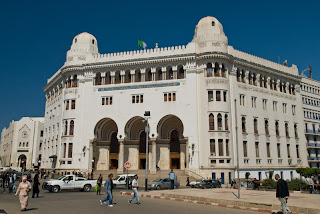 I cannot find anything about Voinot and Tondoire, but I can see what remains of their taste. The massive building, monumental and glist­ening white from the outside, took eight years to complete. It has a large cupola, two imitation minarets, the principal frontage which included three arches, a gallery on high, broad marble staircase, stalactites and engraved stucco. The ceiling of the prin­cipal room was and remains an architectural jewel. Even the main mailbox, used since people starting mailing letters here 100 years ago, retains its lovely floral mosaics. 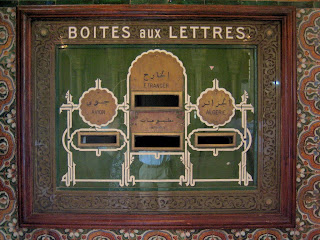 Was this French architecture or Algerian? What are we to make of the original inscription: “God is victorious”? This neo-Moorish taste was definitely intended to appeal to the Muslim community, with the added hope of bringing the two communities closer together at the turn of the century. Presumably Charles Jonnart had no inkling of the bitterness Algerians would increasingly feel about French control of their country. 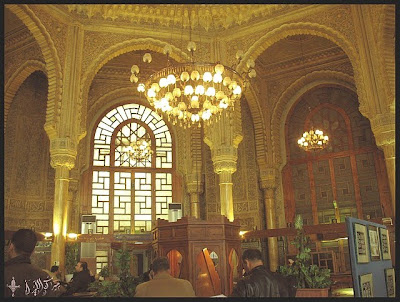 In the interwar period, néo-Moorish designs became somewhat obsolete. But the Grand Post Office remained the dominant monument in Algiers' landscape, a symbol of early French colonial control. The most useful blog I found was Algeria Travel, for example the post on Algiers.
Posted by Hels at 27.8.09

Fascinating post! It's interesting to think about Algerian colonial architecture in conjunction with the "Haussmannization" project that was completed in Paris only about thirty years before. What diverse architectural styles were produced in Paris and Algiers, especially when one sees that modernity was at the heart of both of these projects!

I agree absolutely that modern French architecture and widened, straight boulevards were at the heart of development in both Paris and Algiers.

But the citizens of Paris were, largely, delighted with the modernisation. Their old medieval city became open, beautiful and suitable for modern traffic. The citizens of Algiers, on the other hand, became more bitter about French control with every passing decade.

Hi Hels......love Moorish architecture (reminded of it in Melbourne today, as we walked back to Feedartion Square from the footy - that theatre - can't remember name on cnr Flinders and Exhibition (?) St? )

Anyway, just thought I'd say I love John Bracks - always have -but then I was Melb born, lived til about 10!

I went to Ian Potter to see a Constance Stokes painting - The Village. Am reading Anne Summers book "The LOst Mother" about a painting of the rmother by Stokes.

Greetings from France (Nice - from Roman ruins to mediaeval; from Italianate baroque to Belle Epoque: plenty for the architecture enthusiast!). I'm so glad to have discovered your blog, and have really enjoyed my visit.

lovely presentation. I liked the way you described this wonderful building.

I live near Algiers, and whenever I visit it I have to go to La Grand Post. there are a lot of fascinating details that would take your breath away.

As you have mentioned it before, while Frensh colonialism was busy thinking about its own image. It neglected the natives which would give an other bitter taste to this buyilding too.

here are two more link for you:

Hi! Lamia from Paris.Before my comment, just present myself, I'm an algerian architect who did all my tudies in Algiers.
The french architecture in Algiers is similar to the french cities, and especially Marseilles.
Algiers was the laboratory for the french architecture for more than 1 century.
And if you go to Marseilles, you'll find lot of similitudes between the both seafronts.
And, Haussmanian urbanism in Paris was easily done because no slope. In Algiers, the slopes are very important and the climat was different. It's better to construct narrow steets. It's recommanded to let more shadow than sun, as usually found in cities south side of mediterranean sea.

Lamia
I agree totally about the landscape and the climate. I feel the same about many hot, Mediterranean cities.

And I hope that the good citizens of Algiers felt they owned their city, after the colonial era ended.