Before the terrible financial crash of 1891, Australian homes were most likely to be built in classical, Victorian taste. The houses were symmetrical, built from locally quarried stone, had gently slop­ing roofs and classical proportions in the handling of doors and windows. If the family made money after the gold rush ended, the home would have two storeys; otherwise it would be a single storey cott­age. Inside was one main passage from front door to the back kitchen, with com­part­mentalised rooms off that passage. 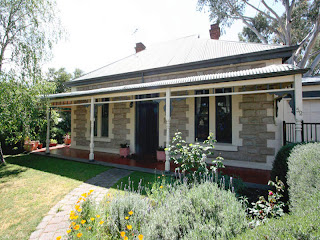 The Victorian home was made thoroughly Australian by the addition of a tiled veranda on two of the four sides, with wrought iron poles and lacework on the veranda. Slate was chosen for the main roof, and galvanised corrugated iron covered the veranda.

After WW1 ended, hundreds of thousands of ex-servicemen wanted to marry and settle their children on free-standing suburban blocks of land. They wanted a small home that a] they could afford and b] did not need staff to help maintain the inside or out. No space was wasted on a passage, but vegetable plots and chicken coops in the garden were considered important. The Californian Bungalow: Australia's Favourite Interwar Home, was perfectly adapted for Australian suburbs.

But what happened architecturally in Australian cities and towns in between, from 1895-1914?

This period was not flush with gold rush wealth, but it was a time of: Federation excitement (before and after January 1901), the dev­el­opment of national identity and of maturity in the brand new century. Railways had extended from the centre of each state capital city to the most distant suburbs, making it sensible for families to build away from the bustle and dirt of the inner cities. As I discussed in an early post, the passion for planned Garden Cities and suburbs, so beloved in London and the Home Counties, was perfectly suited for Australian families. 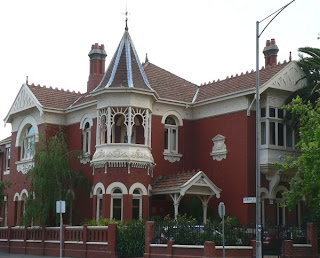 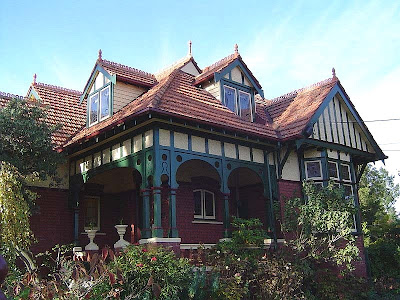 Inside, Federation homes were somewhat more open planned than earlier homes had been. They often had built-in furniture, bay windows with casement window openings, veranda space for outdoor living, simple use of mater­ials and timber panelling. 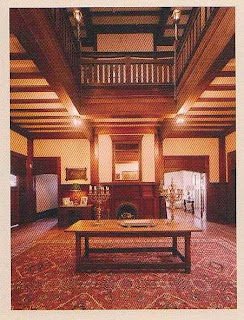 Entire suburbs, newly developed after 1900, emerged with Federation homes and public buildings. They were often centred around the newly built railway station, Federation pub and Federation fire station. Federation Details blog in Federation Queen Anne style and Sydney Eye blog in Federation detailing are visually delightful sites. They suggest we examine the development of Federation homes in Burwood, Haberfield, Rozelle and Strathfield. Now I wonder why all the blogs I that located and cited have been Sydney-based, not Melbourne-based.

Thank you very much, Hels. I would love to own or just live in one of these grand Edwardian houses. There are a few in this style in Brisbane, but probably not as many as there are in Sydney and Melbourne.

These houses are fantastic.
Sydney - City and Suburbs

Beautiful houses, but I actually really like the small one with the veranda as well, it seems much more charming and 'real' than the others. Perhaps that's just me, as I also live in a small Victorian house.

John, the whole question of developing a national taste in Australian architecture is interesting, isn't it?.

On one hand architects here were all British men who emigrated or Australian men who went to Britain to study and work. Australian homes looked exactly like British homes, except for a] wide verandas for heat-control and b] local materials (blue stone in Melbourne).

On the other hand, there was a passion for creating our own identity in the years leading up to Federation (1/1/1901) and throughout the Edwardian years.

But I don't think it happened. Including wattle and gum leaves in the stained glass windows on the front door hardly created a true national style. We were still using British architectural models, at least until WW1 ended.

I really love all those houses, maybe because of its roof... roof tiles can say a lot of the house.
This is cool and very nice informative issues. Thanks for taking the time to discuss that. I'll try to consider it for my future references, thanks for this great article.

thank you. Like John, I prefer the Federation house with the veranda, since it is more authentically Australian (if there is such a thing), and less imposing. But what a great era for domestic architecture!

Hi Hels,
I grew up in a big 'Edwardian' house in Melbourne, in a street entirely in that style, red tiled roofs, turned timber verandahs, and spacious gardens everywhere.
Then I became an architectural historian. I can add to your analysis that houses in the Edwardian period in Melbourne are similar in form to Sydney examples, but the details are notably different eg. the timber verandah detailing, and universal use of red brick. We have a few suburbs, or rather estates, loaded with them eg. Braodway, Camberwell (my street), Grace Park estate Hawthorn and Gascoigne Estate Malvern.
We called them 'Edwardian' here until recently; the Sydney-centric writing on them has however popularised the 'Federation' label, so thats what they're called now. We need more Melbourne bloggers !

Anyway, having read scholarly assessments, and knowing what was built in Britain and the US at the time, the Federation house, while derived from the UK Queen Anne revival, developed as its own distinctly Australian form. UK houses were rarely spreading single storey with attic style like ours, where the roof was all dominant, and certainly didnt have elaborate verandahs incorporated into the design.

So they are indeed something to value as 'Australian'.

thank you for your response. I can live with the labels Edwardian or Federation, and I have no trouble acknowledging significant or minor differences between the Australian capital cities.

But I do not know what the Queen Anne _revival_ style was in Britain. The original Queen Anne style was absolutely symmetrical and rather austere. It did NOT have low towers with conical tops; steep, complex roofs; multiple gables with half timber decoration in them; timber posts and fancy timber brackets etc etc.

Perhaps it comes from turn-of-the century American architectural language, not British architecture from the same time.

I wonder why Brisbane developed someone differently - weather? more money sloshing around the southern states?

I always loved Victorian homes but sometimes we can find the most luscious Edwardian domestic architecture close to home! Since I wrote this blog post, I have found more and more beautiful Edwardian examples!!!

I enjoy reading through a post that will make people think.
Also, thanks for allowing me to comment!

I see you are Australian. Do you live in, or at least long for an Edwardian home?

My name is Andy Rhodes and I'm a film maker from the UK but now live in wonderful Melbourne. I'm scouting locations for my next film and I'm looking for a Stateley Home type property Georgian, Edwardian or Victorian. I'm lookinf to shoot interior and exterior of the building. I've tried National Trust properties and Parks Victoria, at 2K a day it's a little out of budget. Does anyone have any ideas or suggestions. Many thanks in advance. Andy

Good luck with the film. There are thousands of beautiful and intact Victorian and Edwardian homes in Melbourne, but you would be hard pushed to find original Georgian architecture here. We were colonised too late.

Write to me at helenw@bigpond.net.au

Please visit Construction and Concrete Equipment for Hire in Perth