Origins of Guide Dogs for the Blind

I am besotted with labradors and thought, briefly, of putting my beloved labrador puppy into a training school for guide dogs. But Rudy was too playful and too distractible to take a blind person across our kitchen, let alone a busy street. In any case, his main goals in life were to locate pieces of dried liver and to run on the beach. 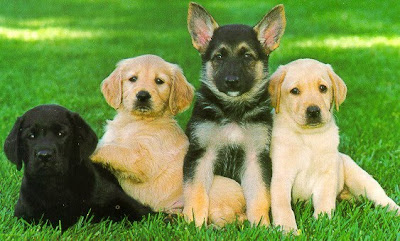 Puppies waiting for training to be guide dogs.
Training cannot start until they are 12 months old.

That led me to consider the history of training dogs for guiding blind people. I easily found 73 blogs and newspaper articles, but they all used the same words and they mostly started their history of guide dogs in the 1920s. Alas I don’t read German and have to rely on secondary sources, so my contribution will largely be the story as it was found in World War One records and images.

Invisible Paris blog wrote in 15-20 Vision that King Louis IX created the original Quinze-Vingts hospital in 1260. The King certainly wanted to look after the blind people of Paris but he was mainly motivated by the many soldiers who were returning from the Crusades and suffering from enemy-inflicted blindness. There are some suggestions that dogs were trained to work with the blind at this Paris hospital, at least when the hospital moved to a better site in 1780.


Vienna in 1819 was the critical city, as soon as Johann Wilhelm Klein became the founder of the Austria Institute for the Blind. The International Guide Dog Federation noted that Klein wrote about training guide dogs in his book on educating blind people, but it is not clear whether his ideas were carried out in practice or not. Still, a Swiss citizen called Jakob Birrer wrote in 1847 about his experiences of being guided over a period of five years by a trained dog. He may have been referring to Klein’s centre.

Dogs and handlers in the German army, World War 1

The historical details from the C19th become more firm when we learn of a smart breed of dogs, as Tiffany Proctor described. That breed was founded in 1899 by Capt Max von Stephanitz. He had been viewing a dog show where he saw what he believed to be the ideal sheep dog. The dog was then purchased and propagated by Stephanitz who, in time, became the founding father of the breed called German Shepherd dogs. The German Shepherd or Alsatian breed grew and grew, and because of its intelligence and obedience, went on to star in seeing-eye work.

The labrador dog has been recognised as a great retriever and gun dog for hundreds of years. But I cannot find when the breed’s loyalty and willingness to learn made it absolutely ideal for seeing-eye work.

Most writers suggest that the biggest push in the 20th century was when dogs were used to lead blinded German soldiers during World War One. Formal, systematic training of guide dogs was started by Dr. Gerhard Stalling who opened the world's first guide dog school for the blind at Oldenburg in August 1916 and the second in Potsdam. The school flourished and new branches opened all over Germany, turning out some 600 dogs a year. Stalling's training became the role model for training guide dogs across the rest of the world. 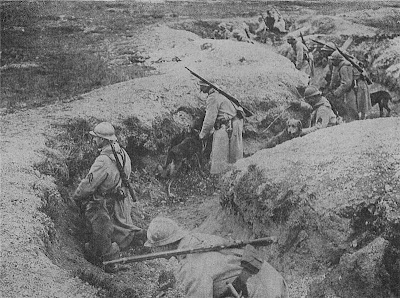 Olive Drab blog in History of War Dogs agreed that dogs were invaluable to the German army in WW1. The Germans reported use of over 30,000 dogs as messenger and ambulance dogs, but I cannot find how many dogs were used/trained specifically to assist the blind. Photos of soldiers in trenches from firstworldwar.com show the dogs actively involved, but their exact role is unclear. 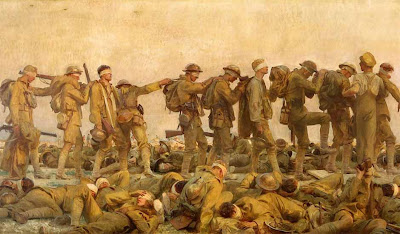 A painting by John Singer Sargent, now in the Imperial War Museum London, showed rows of soldiers who had been blinded by mustard gas. This is exactly the sort of situation that the trained German army dogs specialised in.

Clare Campbell follows the incredible journey of the dogs who conscripted to fight for their country, with some even returning with medals for their bravery. During the most dangerous days of the Second World War, the British government set out to recruit an army of canines - a 'Guard Dog Unit'. This experimental team of brave hounds used their incredible sense of smell to sniff out the anti-personnel mines that barred the way to reclaiming Europe.

Dog owners countrywide shed tears as they bid farewell to their beloved pets and packed them off to the War Dogs Training School to learn the skills they'd need to 'do their bit for Britain' on the very frontiers of the Third Reich. Based on original documents, first-hand accounts and interviews, Dogs of Courage tells a story of human determination, heartbreak and canine courage. As well as detecting anti-personnel mines, the dogs also acted as messengers, rescued civilians trapped under bombed out buildings, tracked down water springs on desert islands, rescued drowning sailors and raised soldiers' morale.

Not only were the dogs intelligent, intuitive and well trained, they were loyal to their human connections to the nth degree. Extraordinary story that will make adults go teary eyed.