The Bauhaus, which opened for business in Weimar in 1919, was not created out of a vacuum. Like every other development in the long history of art, The Bauhaus had a history extending back into the C19th. 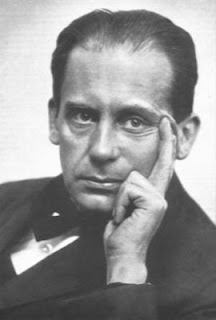 The Bauhaus-Archi Museum of Design noted that Ger­many had rec­og­nised that well-designed industrial products repres­ented a signif­ic­ant economic factor. The British educational system was analysed closely, with an eye to reforming the German schools for arts and crafts. An entire generation of painters understood applied arts to be the major assignment. The Dresdner Werkstätten 1898, with their machine furniture, were the best known examples for the setting up of workshops all over Germany. And 1903 marked the foundation in Austria of the Wiener Werkstätte. The list of precedents goes on.

The Belgian Henry van de Velde had founded the School of Arts and Crafts in Weimar in 1907. It was no coincidence that The Bauhaus event­ually based itself in van de Velde's school building. Also in 1907, artists and industrialists founded the Deutscher Werkbund in Munich, aimed at improving Germany's economy by enhancing craft work. Architects Peter Behrens, Adolf Meyer and Walter Gropius and others wanted to capture the spirit of change.

Typically any new style in art and architecture will either develop its own philosophical framework as the decades pass (eg Impression­ism), or will have a phil­os­ophical framework retrospectively thrust upon them by history (eg Art Deco). But in Walter Gropius’ case, the philosophy of his new school was explic­ated and distributed all over Europe, BEFORE the first student even enrolled. 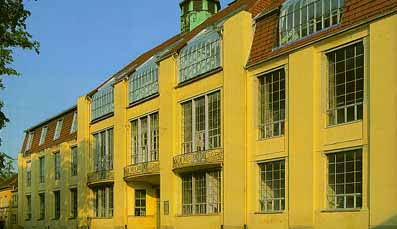 "The ultimate aim of all creative activity is a building! The dec­or­ation of buildings was once the noblest function of fine arts, and fine arts were indispensable to great architecture. Today they exist in complacent isolation, and can only be rescued by the conscious co-operation and collaboration of all craftsmen. Architects, painters and sculptors must once again come to know and comprehend the comp­osite character of a building, both as an entity and in terms of its various parts. Then their work will be filled with that true architectonic spirit which, as "salon art", it has lost.


The old art schools were unable to produce this unity; and how, indeed, should they have done so, since art cannot be taught? Schools must return to the workshop. The world of the pattern-designer and applied artist, consisting only of drawing and painting must become once again a world in which things are built. If the young person who rejoices in creative activity now begins his career as in the older days by learning a craft, then the unproductive artist will no longer be condemned to inadequate artistry, for his skills will be preserved for the crafts in which he can achieve great things.

Architects, painters, sculptors, we must all return to crafts! For there is no such thing as professional art. There is no essential difference between the artist and the craftsman. The artist is an ex­alted craftsman. By the grace of Heaven and in rare moments of in­sp­iration which transcend the will, art may unconsciously blossom from the labour of his hand, but a base in handicrafts is essential to ev­ery artist. It is there that the original source of creativity lies.

Let us therefore create a new guild of craftsmen without the class-distinctions that raise an arrogant barrier between craftsmen and artists! Let us desire, conceive, and create the new building of the future together. It will combine architecture, sculpture and painting in a single form, and will one day rise towards the heavens from the hands of a million workers as the crystalline symbol of a new and coming faith".
signed WALTER GROPIUS
April 1919

In my opinion, Gropius’ aim was to bring all the arts together, equally, under one roof and have them merge together with a new architecture. Bauhaus, he promised, would:
1. unify all the arts so that the various craftsmen could work on cooperative projects in which their various skills would be combined.
2. raise all arts to the same honoured level, rather than tradit­ional division between the High Arts and the Decorative Arts and
3. establish close contact with the leaders of the nation’s in­dus­tries, so that all products of the school would be exposed and sold.

The expressionist style of Lyonel Feininger's woodcut on the front of the Bauhaus manifesto brochure, inviting potential students to part­ic­ipate in the new world of art and architecture, seemed appropriate. 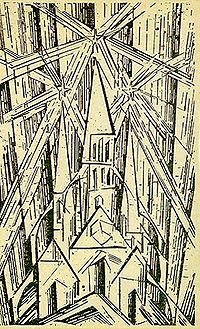 
The Admissions Policy, as set out in the same brochure, seemed very attractive. "Any person of good repute, without regard to age or sex, whose previous education is deemed adequate by the Council of Masters, will be admitted, as far as space permits. The tuition fee is 180 marks per year (It will gradually disappear entirely with increasing earnings of the Bauhaus). A nonrecurring admission fee of 20 marks is also to be paid. Foreign students pay double fees. Address inquiries to the Secretariat of the Staatliche Bauhaus in Weimar".


Gropius sent these brochures to every city and country, advertising the new school in German, Polish and Russian. I would not have ex­pect­ed stud­ents to flock from all over central and Eastern Europe to defeated and depressed Germany, so soon after WW1. But flock they did; 100 fresh faced students arrived on the doorsteps of the Weimar building in 1919. The manifesto seemed like an insp­iring message for young Germans returning from war and for foreign students looking for better careers. They could work to create a new, more humane world. 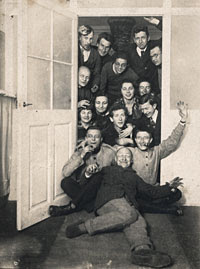 
Slow Painting blog asked was it possible to make a viable institution out of a movement that had arisen out of conflict with institutional authority, and which drew its focus, vitality, and sense of purpose from that conflict? They concluded that The Bauhaus, by enforcing no aesthetic conformity and by promulgating no official style, proved to all that a modernist institution need not repeat the failings of its academic predecessors. Such a receptive stance was perhaps only possible in Germany. The Bauhaus demonstrated that modernism could function as a collective enterprise in an institutional setting, and still give the student the widest scope for individual expression.

I wonder if that is so, for all the students, but for the women in particular.

For very useful reviews of Walter Gropius, The Bauhaus and its manifesto, read:
Last.fm Bauhaus - House of Building, and Christa Nwokedi at Helium

Excellent article Helen. Very interesting to see the early vision of Gropius and how it connected with so many artists and students at that time.

Although the Bauhaus was indeed 'open to all', women were not allowed to partake of many of the disciplines, particularly architecture, and were largely relegated to the textile department. So although the Bauhaus saw itself as revolutionary in some ways, in other ways it was moulded by men who had been brought up within a nineteenth century framework and all that entailed.

A small detail of the Bauhaus outlook to design can be summed up with their re-design of door handles. It was felt that the British style of a round door knob, while decorative, was seen as impractical and so therefore a pull down handle was designed. It was thought that the British version was impractical because servants found it difficult to open while holding a tray.

A nice little story that shows that no one can really escape the prejudices and preconceptions of their time.

Still, the Bauhaus did give us the A1, A2, A3, A4, A5 measurement for cartridge paper, amongst many other ideas, for which I will always be grateful!

A nice point John. People cannot escape the preconceptions of their times. At least not easily and not without pain. The female Bauhaus students arrived in their hundreds over the years 1919 to 1933, all excited about their liberation, and felt cheated by the restrictions which had not been written down anywhere.

But I am still impressed that thethe philosophy of Gropius' new school was explic­ated and distributed all over Europe, before the front doors were opened for the first time. Ideologues may be very difficult to live with, but at least Bauhaus "stood for something" important.

I am with David. On doing your Bauhaus course this year, it stands out how much of an influence Bauhaus had, even on those artists and designers who were not themselves Bauhausers.

Many of the objects look startlingly modern.

David and Student of History

agreed. I think Bauhaus students had to design and redesign their own craft objects over and over, not just copy the old masters. Thus their finished products looked sleek, modern and functional. No wonder they influenced so many other artists, then and since.

The Bear's Lair wrote that in the late 19th century, learned professions were built upon academic traditions — while crafts were built upon artisanal apprenticeships. So 19th century architectural practitioners focused on establishing a collegiate model of architectural education as a way of elevating architecture from craft to profession. Even so, to become an architect, a lengthy apprenticeship always remained an essential component.

Gropius and Bauhaus were going against the tide, not for the first time. See
http://blogs.massart.edu/wlroberts/2013/01/03/architecture-as-craft/

perfect timing for the 1919-2019 anniversary. Many thanks