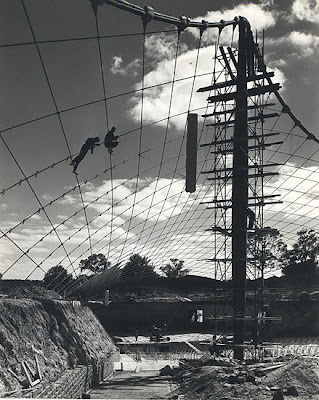 Wolfgang was born into a very clever and creative family in Berlin. His father was an academic art historian and his mother was involved in the film industry. By the time he was old enough to work, The Bauhaus had long closed so he could not have been a student there. But in 1938, he stayed on as a teacher at a School for Modern Applied Arts, an educational organisation sympathetic to Bauhaus philosophy. Since his mother was Jewish, Wolfgang left Germany for ever in 1938 - luckily for photography and for Australia.

Safely in Melbourne, Sievers spent his long life recording industrial and architectural scenes. They covered the gamut from mining, office building, scientific proc­ess­es, light and heavy industries, Olympic stadia to schools. This prolific photographer seemed to find black and white a more fitting medium for his subjects than colour. 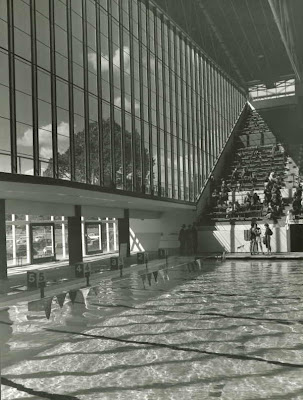 
Let me insert a personal note here. My father was the filtration engineer for the swimming and diving pools in the 1956 Olympics, and might well have been aware of Sievers as he moved around the pools.

cedvernay.com blog showed that the ex-pat German citizens who lived in Melbourne tried to help each other out in their new country. In 1946, Helmut Newton set up a Melbourne studio and worked primarily on fashion photography. The exhibition of New Visions in Photography, which was held at the Federal Hotel in Collins St in May 1953, was shared with Newton, Sievers and Henry Talbot, another German ex-pat artist who had also been interned. Three creative, supportive men.

Cyberslacker wrote that in the 1950s, Wolfgang Sievers was hired by the Australian Government to help change the image of Australia from rural and agricultural, to industrial and manufact­uring. And he was clearly hired by private companies as well. What was he doing? Seeking out gritty photos to show progress, modernity and indust­rialisation on behalf of his patrons? Examine Mrs. Deane who has a wonderful wolfgang sievers’ archive 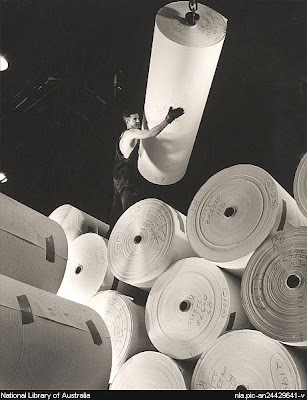 Apparently not. Alert and Alarmed (24/4/2005) wrote: The photography of Wolfgang Sievers allows us to become aware of ‘the dignity of man as a worker’. The dirt, noise and danger of the machinery may not always be visible but the worker is aware of his personal vulner­ab­ility. The nation might need to show physical exertion, skills and initiative; the nation might need the collective effort of the working population. But the worker himself is entitled to respect and industrial support. 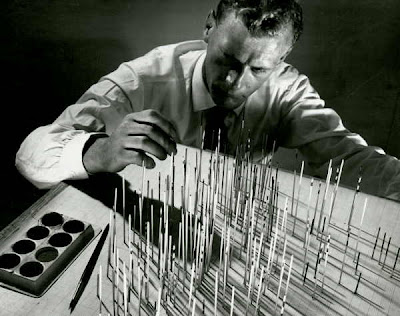 Of course Sievers chose subjects that lent themselves to impressive and monumental photographs. He specialised in mining, geological exploration and the oil industry precisely because the tasks were bigger, more dangerous, more mechanised and more cutting edge. He could have photographed people gardening or waltzing, but neither of those occupations was gritty or cutting edge. Even his passive, sedate images had fascinating patterns within.

In Siever’s view, the Australian workplace was far more egalitarian and open than in other countries, allowing more scope for his determination to portray the dignity of labour. But how do we know about Sievers sympathy for the working people of this nation, other than by “reading” his images? Because he went outside his briefs, even at his own expense. “Often controversial, his strong beliefs, intolerance of racism and increasing concern at the dest­ruct­ive practices of capitalism also led him to question the morality behind many corporate entities, in many cases his clients.” And because Sievers donated $1 million worth of photographs to raise money for social justice. 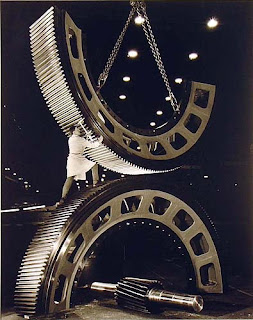 There are tens of thousands of Sievers photographs in the Digital Collection of the National Library of Australia. Sign Language reported that some of the best were shown at a major retrospective of Wolfgang Sievers’ work, held at the NGV. Thomas Ryan has superb Sievers photos of the Burnie Paper Mill, back in the days when the mill provided employment to so many Tasmanians.

I've got links on my site that you mention to Sievers works, as well as my own photographic series of the former Paper Mill at Burnie. Nice post.

Amazing photos, aren't they Thomas? Even 50 years later, or perhaps especially so.

I put the link into your post on the Australian Paper and Pulp Mill in Burnie way back in 2009. And that photographic collection, 1956-62, is even more important, now that the mill has closed.

Indeed, they form an important collection, the Mill has been closed down 1 year to the day last Sunday and when I have the time I hope to post more photographs of the grandeur of the mill.