I have read a number of fine histories (see below) of exotic hot drinks being brought to Europe. The dates, source countries and methods of trans­port differ somewhat but we can come to some approximate con­clus­ions. Chocolate was definitely the first exotic drink brought to Europe, by the Spanish from the Americas in 1528. Tea was first sold in Europe in 1610. The East India Company, under a charter granted by Elizabeth I to the Directors, had the monop­oly of import­ing goods from outside Europe; they recorded ships reaching Brit­ain in 1640. The first public coffee house probably opened in Venice until 1640, where the mer­chants imported it from Turkey. The first coffeehouse opened in Vienna in 1683 after a Turkish siege. 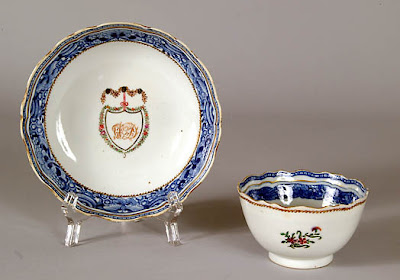 What connection does the arrival of tea have with the growth of the British pottery industry? The des­ign source for teapots may have come from the Is­l­am­ic cof­fee pots, which were first seen in the popular coffee houses of Europe and England in this period. Earl Cad­ogan, whose estates were located in Stafford­shire, the fut­ure centre of English porcelain production, was the first Englishman recorded to have owned such a Chinese wine pourer. It was gl­obular, predicting the future design of most ceramic teapots produced in Europe. Silver teapots were for the wealthiest. 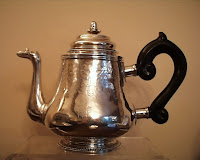 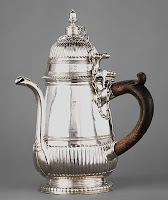 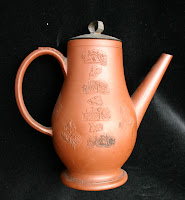 Tea was drunk in China from cups without handles. When tea became popul­ar in England, there was a great need for good cups with hand­les, to suit British habits. This made for tremendous growth in the pottery and porcelain industry, and the prosperity of companies like Wedgwood, Spode, and Royal Doulton. Worcester was founded in 1751 by a doctor and a chemist: Wall and Davis. They wanted a line of collectibles that would stand out, so they dev­eloped a soaprock porcelain that could tol­er­ate very hot fluids, especially important for cups, tea bowls, saucers and tea pots. Their love­ly blue under-glazing, sometimes combined with blue & white patt­er­ns.

Tea was at first a luxury, enjoyed only by the rich, and for a long time the government imposed a huge tax (up to 200%) on it. As a result, a thriving trade arose in tea smuggled from Europe. Caroline's Miscellany agreed in Tea smuggling in Deptford that England's harbours were rife with smuggling and stealing. Many goods were heavily taxed, meaning that if smugglers could sneak them into the city unofficially, they could undercut honest importers' prices. Except for the state, everyone was happy: the seller made good money and the buyer got a bargain.

Tea caddies were locked, so servants could not get to the precious tea leaves. In the C18th tea generally replaced the ale that had previously been the English people's basic drink. Finally in 1784 the tax was abol­ish­ed and smuggling ceased. Tea was in England to stay, with coffee only a pale second, at least until recent decades. 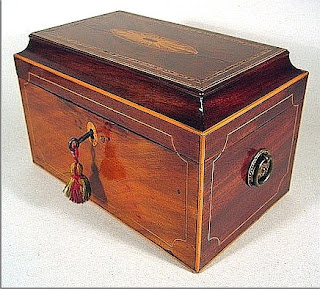 The Chinese, who were making tea services, quickly added chocolate and coffee ceramics to their exports, and silver manufacturers also ad­apted their tea services to the new chocolate and coffee fashions. Chocolate pots quickly became popular. The silver chocolate pot had a hinged lid or a detachable finial through which a molinet/rod was in­ser­t­ed, to stir chocolate sediment. The molinet was generally made of wood, with terminal in silver or ivory. Coffee pots had no such rod. The earliest silver coffee pot I could find recorded was ordered by East India Co. in 1690. 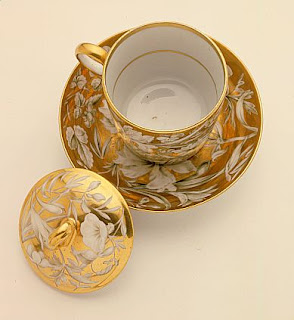 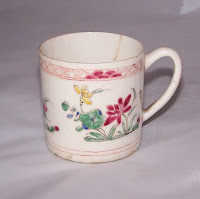 The hot drinks were poured into cups that differed slightly in shape and size. Coffee cans had straighter sides than tea cups which we saw earlier. Chocolate pots seemed to have derived from a custard pot with two-handles and a cover.

For a history of coffee in London, see the next post.

Good morning, this post is very interesting, thanks for the very particular informations you give. As for coffee I have to tell you the truth I love very strong coffee tastes as all italian, but my observation has less to do with your very nice post.
Regards from Italy

Francesca,
I am passionate about coffee too and want to thank the Italian Olympic team for bringing the first espresso machine to Australia in time for the 1956 Olympic Games in Melbourne. It was a triumph!

I have added a translation widget next to my blog... I hope the Italian translation is excellent.

The tea tax reached such a level in the eighteenth century (119%) that it has been estimated more tea was smuggled than imported legally! Things calmed down again at the end of the century when the tax was reduced to more sensible levels. The UK Tea Council has a nice summary - see http://www.tea.co.uk/page.php?id=6

England came to the chocolate game first through translations of a 1631 book about chocolate written by Spanish doctor Antonio Colmenero de Ledesma which were published in the 1640s and in 1652. The title page of the 1652 translation notes that the chocolate described in the volume could be purchased “at reasonable rates” from bookseller John Dakins in Holborn. Booksellers often sold medicines and nostrums at this time, which is how chocolate got on the menu.

Thank you. I love it when people scan the bloggersphere for connections. I will create a link straight away.