Art Deco and Cruise Ships, a marriage made in heaven

By 1900 the arrival of four German luxury liners, all named after members of their imperial family, caused the British to build their own luxury fleet. Cunard's Lusitania was launched in early 1907 and the Mauretania in later 1907. Aquitania was their last, completed in 1913. Cunard's British rivals, White Star Line, launched the Olympic in 1911, and then Titanic and Britannic before World War One broke out in 1914.

But it wasn't until the later 1920s when Art Deco started to epitomise the age of jazz, Hollywood glamour and conspicuous consumption, or at least the promise of the glamour. Deco was adopted as a totally modern style and became the style of the new pleasure sites: cinemas, cruise ships, restaurants and bars. But nowhere was it used more comprehensively than in cruise lin­ers.

This was the era of speed: trains, ships, cars and planes were all achieving faster and faster speeds. My favourite Deco posters showed trains and ships seemingly bursting forward and giving the illusion of speed. So note two things. a] The Deco Style was itself represented by fast, modern ships. And b] now we are about to see how inside these ships, the taste was almost always deco. Art Deco and cruise ships referenced each other. 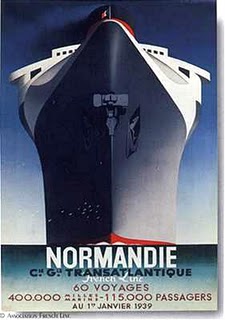 Deco poster for the Normanie, 1939


The French Line’s success took off when a third ship was added: the Ile de France in 1927. The novelty of Art Deco aboard a ship was an immediate sensation and the reaction of the visiting press was appar­ently very favourable. Was it the first passenger ship completely decorated in the contemporary deco style? I can find nothing earlier.

One of the key materials used on Art Deco floors was Linoleum. They used it in striking geometric patterns or in a plain colour with a contrasting border around the edges of the room. 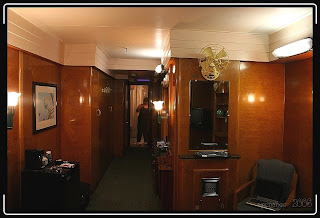 
Much of the furnishings of Art Deco were to add glamour. Walls were painted plain cream or brown, but they could have a thin border added around the cornices. Paint finishes became common. Velvet and leather were used as upholstery materials, and furniture had pronounced rounded corners. Wood-work was widespread and superbly crafted, sometimes in medium coloured finishes. Plain pelmets were used to keep the effect striking. Fabrics were plain or had a geometric design such as Aztec.

This was the era of glass and chrome. Lighting was an important part of Art Deco, both for the electric light effects created, and the light fittings themselves. In keeping with the general Art Deco theme, light fittings were streamlined. A typical feature was the wall light, in a fan or bowl shape. Lamp bases were often made of figurines. 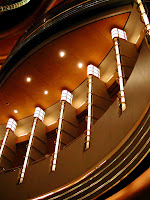 
Before Art Deco, colours were commonly creams and beiges, but now more vibrant colours became fashionable. Purple, green and lavender appeared with metallic finishes and reflective surfaces that emph­asised the colours. Black was saved for emphasis eg picture frames, thin lines on walls for a border effect or edging on lamp shades. 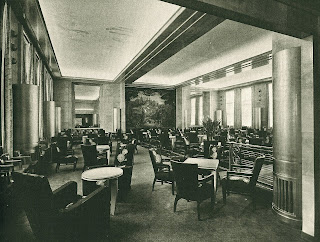 
The French Line’s SS Champlain of 1932 was another truly modern ocean liner and embodied many design features later incorporated in the more famous SS Normandie. Her gorgeous interiors were designed by Rene Prou who déc­or­ated spaces in several earlier French Line ships.

Building of the Queen Mary started in 1930 on the River Clyde in Scotland. But the Depression meant the ship, the pride of Britain, wasn’t completed until 1936. Rooms in this enormous ship today still feature the original wood pan­el­ling, etched glass and deco taste. Queen Mary boasts 2 restaurants, including Sir Winston's, and several cocktail bars. 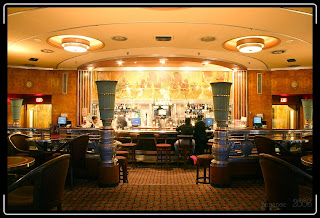 
Holland-America's Nieuw Amsterdam’s public rooms reflected the growing shift towards simp­lic­ity of design late in Deco era. It is suggested that the Holland-America's flagship had a smoother, less garish interpretation of Art Deco than most of her contemporaries. Muted colour schemes and motifs were introd­uced, so that the pass­engers could provide the gaiety. As well as to restoring the vessel to her pre-war standard of high luxury, they added the complete redesign of the main public apartment, the Grand Hall, on the Promenade Deck. The other public rooms were fully restored: the domed dining saloon, Ritz-Carlton room, smoking room, two indoor pools and the Turkish Baths. Peter Knego's Sea Treks located a pair of Deco bas-reliefs from the ship, before it was scrapped in 1974.

THE BLUE LANTERN's post called Bon Voyage! showed some of the beautiful Deco posters that were used as cabin art in Holland-America's Volendam and Nieuw Amsterdam. Note the sophistication and the promise of glamour.

It is interesting that modern ships may also want to surround themselves in the Art Deco taste, some 70 years after Deco was the rage. Cruise Diva blog in Royal Caribbean Culinary Experiences Evolve Aboard Oasis of the Seas reported that Silversea Cruises’ newest ultra-luxury ship, Silver Spirit, is set to debut in lavish style in Jan 2010. The onboard décor will lend a sophisticated 1930s Art Deco ambiance to the public spaces.

From Linda Coffman, AKA Cruise Diva who said...

I do think Art Deco is a bit of nostalgia as well as a comfortable style that is really timeless. The golden age of sea travel in the last century is perceived as a romantic era that many of today's passengers would like to "escape" to.

Very interesting topic, Hels. Thank you for bringing it up!

I appreciated seeing the Deco posters in our course. Do you know if we can see any of those travel-related posters these days?

The golden age of sea travel was over, for most people, when planes became faster, more efficient and no more expensive that luxury ships. Our very great loss :(

But I find not all students are equally nostalgic about luxury ship travel or, for that matter, about Deco itself. My older students love both!

I am quite interested in the International Poster Gallery in Boston. Perhaps someone who has been there would tell us if the gallery is well curated and if the Deco posters are originals.