Nathan Tallman's LIS Blog: Nazi records of stolen art found in National Archives discussed the discovery of two original leather bound photograph albums documenting art that was looted by the Nazis during WW2. A key player was Robert Edsel, co-producer of the documentary film, The Rape of Europa and founder of the Monuments Men Foundation for the Preservation of Art.  The film was based on the book The Rape of Europa: The Fate of Europe's Treasures in the Third Reich and the Second World War by Lynn Nicholas.

These albums were created by the staff of the Third Reich’s Einsatzstab Reichsleiter Rosenberg (ERR). This special unit was organised in summer 1940 under Reich Leader Alfred Rosenberg, initially to collect political material in occupied countries for exploitation in the "struggle against Jewry and Freemasonry." Hermann Goering gave the ERR the responsibility for the confiscation of "ownerless" Jewish art collections. Late that year, Adolf Hitler ordered that all confiscated works of art be brought to Germany and placed at his personal disposal. During the next several years, the ERR was engaged in an extensive art looting operation in France that was part of Hitler’s much larger scheme to steal art treasures from conquered nations.

The Archivist hailed this discovery as one of the most significant finds related to Hitler’s premeditated theft of cultural treasures since the Nuremberg trials. The original documents shedding light on this important aspect of WW2 are still being located, important because of the hundreds of thousands of cultural items stolen from victims of the Nazis that are still missing.

These two photographic albums were held by the heirs to an American soldier stationed in Berchtesgaden Germany in the closing days of WW2. The albums showed just how obsessed and personally involved Adolf Hitler was with building the world’s greatest museum—the Führer Museum, in his hometown of Linz. I'll mention Linz again.

After the German occupation of France in 1940, the ERR, focused their art confiscations on the world renowned Jewish- owned art collections from families such as the Rothschilds (5,009 items), the Veil-Picards, David-Weill (2,687 items) Alphonse Kann (1,202 items) and Jewish dealers such as the Seligmanns and Georges Wildenstein. According to the German ERR documents from 1944, art seizures in France totalled 21,903 objects from 203 collections. The first shipment of confiscated art objects sent to Germany from Paris required 30 rail cars and consisted primarily of Rothschild paintings intended for Hitler’s Linz Museum. Among the first 53 paintings shipped to Hitler was Vermeer’s Astronomer from the Édouard de Rothschild collection, now in the Musée de Louvre Paris. 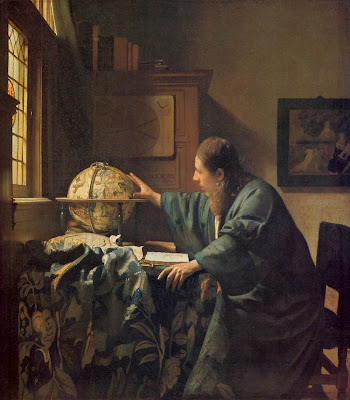 As the ERR staff looted and catalogued the French collections, they created photograph albums specifically intended for the Reichschancellery and Adolf Hitler in an effort to keep them apprised of their work in France. And they provided a catalogue of items from which Hitler and his curators could choose art treasures for the Führer’s Art Museum in Linz. ERR staff stated that 100 such volumes were created during the years of their art looting operation.

We need to understand the role of the men and women of 13 nations, known as Monuments Men/staff of the Monuments, Fine Arts and Archives units. These people rescued and returned 5 million cultural items to the countries from which they had been stolen, including many of the paintings featured in these Hitler Albums. When some of the ERR photographic albums were recovered, they were turned over to the Monuments Men and were stored at the Munich Central Collecting Point where they were used in identifying art work to be returned.

Today the National Archives has custody of the 39 original ERR photograph albums that were discovered at Neuschwanstein, where the Germans had placed them for safekeeping in April 1945. In late 1945, this set of 39 albums was used as evidence at the Nuremberg trials to document the massive Nazi art looting operations. Until now it was believed that the missing ERR albums had been destroyed during the latter days of WW2. Now two more albums have been recovered and will undoubtedly serve as useful sources for documenting not only Nazi art looting but also establishing the provenance of art works.

Big Lightning blog has perfect timing. Linz is one of Europe’s Capitals of Culture for 2009, with Vilnius. During the year, Linz Castle Museum will hold an exhib­it­ion about Hitler’s museum, the Führermuseum. From 1938 until the end of WW2, Linz Castle was used as a showcase of the National Socialist culture.