The garden city movement was a British approach to urban planning, founded in 1898 by Sir Ebenezer Howard. Garden cities were to be planned, self-contained communities surrounded by green belts. They were to include carefully balanced areas of residences, industry and agriculture. Howard’s book Tomorrow: A Peaceful Path to Real Reform came out in 1898, just one year before he founded the Garden City Association in 1899. Two of my favourite garden cities reflect Howard’s thinking: Letchworth Garden City and Welwyn Garden City, both in or near Greater London.

The garden suburb wanted to provide solutions for social problems by applying certain spatial principles, such as picturesque images, strict control on design, physical distance from crowded cities and a degree of mixed use and diverse housing. I suppose many people had tried this before, but these satellite cities were different in that they were to be self-sufficient. It was the agricultural beltline and the factories of leading industrialists that would provide the self-sufficiency of the garden city's residents. So the intention was to combine the advantage of town life with the attract­ions of living in a healthy rural environment.

Strange Maps blog provides a wonderful schematised Howard plan called Slumless, Smokeless Cities. Central City (pop 58,000) was to be the hub for 6 surround-ing garden cities (pop 32,000 each). Each of these 7 urban centres was surround­ed by a canal, which also connected them to the neighbouring and the central cities, forming a wheel-shaped system of waterways, the Inter Municipal Canal. A slightly smaller circle was formed by the Inter Municipal Railway. Within this circle lay all the public institutions that would be needed by the community. And space was clearly allocated for the reservoirs, forests and farms.

And standards were to be maintained, beyond the design and building phases. It was important that both the town and the agricultural belt would to be permanently controlled by the public authority under which the town was developed.

Henrietta Barnett founded Hampstead Garden Suburb in 1907. She wanted to save 80 acres of land from the "rows of ugly villas that dis­fig­ure most of the suburbs of London". She required that a] the cottages and houses should be limited on an average to 8 per acre; b] roads should be 40’ wide; c] fronts of the houses should be at least 50’ apart, gardens occupying the space between; d] plot divisions should not be walls but hedges/trellises; e] every road should be lined with trees. 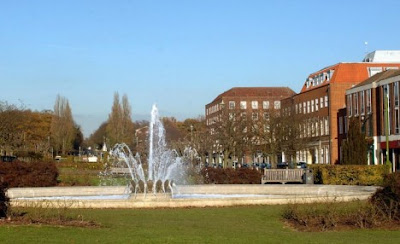 What I didn’t know was that Edwin Lutyens’ association with the city beautiful tradition was already strong by the time Barnett needed a consultant. In the event, Lutyens was mostly notably involved in the central Town Square which, to Barnett’s way of thinking, was the most important part of Hampstead Garden Suburb. This was where the suburb’s key public facilities were built.

My interest in the garden city concept came, surprisingly, from The Arts and Crafts Movement which seemed to have a dilemma. On one hand, they romanticised the simple and honest rural life. On the other hand, the movement was receiving most of its support and patronage in large cities like London and Glasgow. But fortune smiled on the arts and crafters. As suburbia extended into the countryside, late C19th town planners became more anxious to preserve green space in inner cities and protect the countryside on the cities’ outskirts. In and near London, arts and crafts developments thrived in the garden suburbs like Ham­p­stead Gar­den Suburb. [The move to the Cotswolds was something quite different, I think].

Ebenezer Howard's Garden City Association was really quite radical. Its objectives were:
1. To secure decent, well designed homes for everyone, in a human scale environment combining the best features of town and country
2. To empower people and communities to influence decisions that affect them and
3. To improve the planning system in accordance with the principles of sustainable development

James Shepherd of the Where blog noted that the Garden City Association/later the Town and Country Planning Association had real results. And not just Letchworth Garden City and Welwyn Garden City. Both could be called the ‘home’ of town planning, precursors and arguably basic blue-prints for the Britain’s 21 New Towns that were built from 1946. These New Towns have subsequently been used as valuable case studies by urban planners when designing new conurbations across the globe.

Councils all over the world became interested. Based on the garden city concept, a small area was bought in June 1915 from the Grange Farm estate in Adelaide. During WWI it had been the site of an army camp and after the soldiers came home, the area was ready to develop. Cal­l­ed Colonel Light Gard­ens, this Adelaide suburb was an excellent example of 1919 town plan­n­ing, probably the most comp­lete example of a garden suburb in Australia. It had radial street pattern, reserves and gardens, wide avenues, useful laneways, street frontages and park-like setting. And because Colonel Light Gardens was built a gener­ation after Letchworth Garden City etc, housing tastes had changed. The Adelaide suburb adopted a consistent style of mid-1920s Californian bungalows. 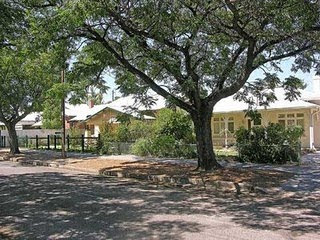 For a Sydney example, see the inner west suburb of Croydon. Sydney City and Suburbs depicted the Malvern Hill Estate which was subdivided in 1909 and designed as a model suburb with Federation style houses and tree-lined streets. Houses of the '20s and '30s by Peter Cuffley discussed the first Australian Town Planning and Housing conference and exhibition held in Adelaide in 1917. He also listed the garden suburbs and model estates developed around the SE corner of Australia.

For an American example, examine Greenmont in Dayton Ohio: Daytonology: Greenmont as Garden Suburb, completed by 1942.

Clooks wonderful. Must dive into the net for more photos....

Per yr question: Greenmont was concieved in 1940-41, Construction contract was awarded in 1941, construction complete and first occupancy in 1942.

There is a social/political history behind the place, too, at this post:

There are better US examples of Garden City design. Two are in Cincinnati: Greenhills, one of the three Greenbelt towns of the 1930s, and Mariemont, which is older (from the 1920s, I think).

There is a link to an extensive discussion/pix of Greenhills at the Daytonology Greenmont post.

Fabulous posts. I enjoyed reading. I am a grad student innostri Land Arch. Edward Lutyens was also befriended by Aunt Bumps aka Gertrude Jekyll. They enjoyed many years of professional and personal friendship. I'll be back...

The name is Edwin Lutyens not Edward Lutyens

I am a touch typist and don't look at the keyboard. You are of course right about Edwin's name... I corrected the mistake immediately.

I keep coming back to this topic, years after I did the first reading. It is fascinating stuff.

Today I added a link to Peter Cuffley's book "Australian Houses of the '20s and '30s", published by Five Mile Press in 1989.

Jefferey
thank you for the excellent references, sites that I would not have found myself. This semester I am re-reading the material on the early 20th century American garden cities.

did you find more photos that you could share?

What's Taking place i am new to this, I stumbled upon this I have discovered It absolutely useful and it
has helped me out loads. I hope to give a contribution & help
other customers like its helped me. Great job.

have a look at the very informative post on Romford Garden Suburb in the blog "To Discover Ice".

Henrietta Barnett was a very interesting character. She and her husband Samuel founded Toynbee Hall in London's East End where John Profumo spent the rest of his life tirelessly working after the scandal had broken.
The Adelaide project sounds like something worth seeing! You can see on Google maps how it is surrounded by it's own little green belt.

Toynbee Hall was special in its own right, many thanks. I can forget Profumo easily, but I am spending quite a bit of time reading about Henrietta Barnett's relationship with Edwin Lutyens. I will write a post soon!

Really enjoyed this post. Early green thinking! I wish everyone could see that by thinking/being green, we can actually live a happier life BUT people like to focus on the politics, always. Anyway, thanks for sharing!

welcome aboard. Normally when we think green these days, we mean not wasting precious resources, not creating pollution, minimising climate change, recycling resources etc. The Garden City Association were on the right track, even as early as the late 19th century - carefully balanced areas of residences, industry and agriculture within each town; detached houses each surrounded by garden space; sustainable development; wide tree lined roads etc. I was so proud of Sir Ebenezer Howard and his colleagues.

J7 ICON is being developed by J7 Group in Islamabad on the most prime location, just in close proximity to the new airport, on main Srinagar Highway. Whether you are looking for a luxurious experience of our apartments, branded shops in our lavish mall, or even an excellent opportunity to invest, we have got it all covered for you. With a number of high-rise projects in our timeline, we are inviting you to this secure, life-changing investment opportunity Garden City Islamabad

Ebenezer Howard's Garden City Association's values seem modern and relevant, even in the 21st century. But I wonder how many people read the Association's writings these days, as well as the discussions and reviews about Britain’s 21 New Towns.