I was delighted to read Yigal Zalmona’s The Tower of David Days, the cat­alogue pub­lished for the Jerusalem exhibition of the same name in October 1991. While I have seen many of the individual paintings in public collections, I’ve never before seen the exhibitions analysed.


A few art exhibitions had already been mounted in British Palestine. Yaacov Pereman, an art collector from Odessa, organised an art ex­hibition in 1920, held in the Herzliya Gymnasia in Tel Aviv. Pereman displayed part of his own collection: 200 post impression­ist, semi cubist Rus­sian paintings he had brought with him to Pales­t­ine. The very next year he tried again, renting a Tel Aviv hall to disp­lay new and established modern artists. Also in 1920, the Hebrew Union of Art­is­ts was formed. They laun­ched themselves with an ex­hib­ition at a private Jerusalem home. Nothing much came of these exhibitions, but clearly the time was right.

British Governor of Jerusalem, Sir Ronald Storrs, set two goals for the local art world. Firstly the Tower of David ci­t­adel was to be re­n­ovated. Secondly he established The Pro-Jerusalem Society, to fos­ter arts and crafts in the city. British town plan­ner, archit­ect and Arts and Crafts artist Charles Ashbee had already established artists’ and designers’ co-operatives in London. Now Ashbee tried opening an art school in Jerusalem. In the event, no school was built, but Ashbee did open the first Tower of David Exhibition in April 1921. The elite of Jerusalem’s British, Jew­ish, Muslim and Christ­ian com­munities were invited to the ex­hibition which was opened by Sir Rob­ert Baden Pow­ell! The Tower of David, still looking like a building site, was made suitable for this important cultural event, with speeches, music and very elegant clothing. 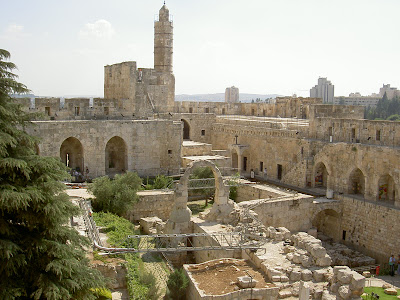 Tower of David galleries and courtyard

But why did British mandate authorities bother getting involved in a na­tional art exhibition in Jerusalem? Yigal Zalmona suggested Storrs really did want to preserve the city’s cultural heritage and improve the welfare of its citizens. And Ash­bee was working in the spirit of his mentors, Will­iam Morris and John Ruskin.

The wives of British Mandate officials may have had a different motive. Mrs Albina, wife of the deputy police commissioner, wanted to exhibit her own watercolours. Mrs Gordon and Mrs Drucker, whose good husbands encouraged their art work, wanted to display paintings they had created in a previous colonial posting in India.

And we have to ask why the British authorities waited until Boris Sc­hatz was out of the country, raising money for his beloved Bezalel Art School? As ex­pected, newspaper reviews noted that Bezalel was the main body that had been crucial for the visual arts in Jerusalem since it opened its doors in 1906. Furthermore most of the particip­ants in this first Tower of David Exhibition were in any case Bezalel teachers and students.

The exhibition was divided into sections: Islamic art, international art, Hebrew Union of Artists’ work, British officers wiv­es’ paintings and Be­d­o­uin textiles. And it was a great success, with thousands of adults and school children visit­ing, and quite a number of art ob­jects being sold. But there was a flaw. Ide­ol­ogical differences be­tween the Bezalel trad­itional­ists and the mod­ernists, many of them former Bezalel students, revealed a potent­ial clash.

Still, in 1921, only two Tower of David artists declared them­selves part of modern art move­ment, in opposition to Bezal­el­. The rest of the mod­er­n­ist artists were either still in Paris or did­n’t participate in the Exhibition. Gideon Ofrat (100 Years of Art in Israel, 1998) rightly stated that at this stage, Bezalel st­aff were still confident of their firm grip on the present and future.

British Mandate officials ran an art exhibition again in 1922 but from then on, the Tower of David Exhibitions had very little British involvement. In 1924, at the request of the Pro-Jerusalem Society and under the sp­onsorship of the Hebrew Union of Artists, the landscapist Reuven Rubin mounted a one-man exhibition at the Tower of David.

By 1925 the rebel artists had all returned from Eu­rope, and had for­­m­ally created the Modern Painters Group: Reuven Rubin, Ar­ie Lu­bin, Joseph Zaritsky, Ziona Tager, Israel Paldi and others. This doesn’t mean they shared a single artistic vision, of course, as Moshe Barasch noted (Quest for Roots, Artists of Israel 1920-80, Jewish Museum of New York, 1981). In fact Paldi actually asked to be hung separately from the Bezalel­ites. 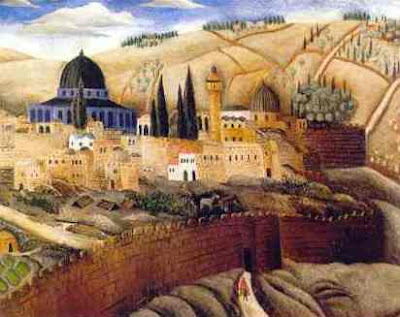 In 1925 Ziona Tager returned from Paris and joined the Modernist Group. She exhibited in the Ohel Theatre in Tel Aviv and at the Tower of David Exhibit­ions in Jerusalem. Tager used Fauvism, Cubism and Expressionism as required. She had an interesting placement of human activity in the natural land­scape that was not always utilised by the others eg Ein Kerem Vill­age 1927. It feels as if humans had a real influence on Tager’s landscape; they moulded it and made it grow.

In time, the modernists were in the majority and were well represent­ed on all selection committees. At the 5th Tower of David Exhibition in 1926, 200 works were displayed, the majority modernist. Only Raban and two other artists represented Bezalel and they stood out uncom­fortably. The politicising effect of all the Tower of David Exhibit­ions on the modernists was such that they now tackled Tel Aviv. In January 1926, the first modern art exhibition was held in the Ohel Theatre, under the auspices of the Labour Union. It was a great financial and critical success, especially as most of the artists returning from Paris moved straight to Tel Aviv, not Jerusalem.

How the art world had changed in Palestine since 1906. Bezalel's anachronistic, national-oriental nar­rative style was challenged by young rebels in Bezalel and by newly-returned artists. The definition of mod­ernist in Palestine was hard to pin down. But these artists, a gen­er­ation younger than Schatz, Pann and Raban were searching for an idiom appropriate to Middle Eastern art, not Euro­pean art. And they had found it.

Alas Bezalel couldn’t stand the tension. A separate art movement emerged out of Bezalel, a movement that disassociated itself from the religious, Diaspora-oriented, tradition which was dictated by the Bezalel Academy. Known as the Rebels of Bezalel, this movement sought to pay homage to the Middle East and to the New Jew, by depicting the landscape and local people of the country. Its members sought to express their newfound ident­ity as Hebrew rather than Jewish artists. This movement was estab­lished by Avraham Zaritzky and Reuven Rubin.

Financial difficulties at Bezalel followed and the school closed in 1929. Yigal Zalmona’s conclusion is that the move towards modernity may well have happened post-1920 in any case. But the Tower of David Exhibitions pointed clearly to the inseparable links between ideology, historical exigency and art in British Palestine. With the searing conflicts of the mid-1920s, the norms supported by Bezalel Academy lost their charisma.

Dear Helen,
Please may I contact you about your paper "The Tower of David Days". I am a student of Art History at Kiel University and I would very much like to read your paper. Would you be able to help me?

Thank you very much in advance.
Sincerely
Moya

Hello Moya
Yes I would be very happy to send you a copy of the paper. Please cite the paper by giving the full reference:
Webberley, Helen
“The Tower of David Days”,
AHCCA Postgraduate Association Conference,
Melbourne University,
Nov 2004

And don't forget the catalogue of the exbition "Tower of David Davys, First Cultural Strife in Israeli Art", Museum of the History of Jerusalem, 1991. It was beautifully written.

I am a 3rd year BA student from Bar-Ilan University, Israel.
I'm currently conducting a research regarding the transformation of one of the most well known Jerusalem icons: The Citadel of Jerusalem (The Tower of David). One of the most important aspects of this transformation involves the creation of the "Tower of David museum" in the last decades as well as its use as a place for art-work during the time of the British Mandate in Palestine.

I was wondering if you would agree to send me your paper in the regarded lecture ("The Tower of David Days") to be used as a possibly useful source for my research. It comes without saying that I would cite the paper at full reference.

I never knew all these things you write of. I see that your blog is going to fill many holes in my education.
Jaffa Gate was just rededicated on April 21. I posted about it.
(A fine date, April 21. My 3rd Australian grandchild, a girl, was born! They live in Bondi.)

It is ages since I looked at the first Tower of David Exhibition which was held in April 1921. Ditto the "Tower of David Days, First Cultural Strife in Israeli Art", shown at the Museum of the History of Jerusalem in 1991. This semester we are studying Bezalel again in Melbourne - about time too!

Your granddaughter must be very mature and sophisticated by now :)