Karen Dinesen (1885–1962) was born in Rungsted on Denmark’s Zealand Isl­and, one of 5 children. Her army officer father Wilhelm was an ad­ven­t­urer who worked as a fur trap­per in North America. He ret­ur­n­ed to Den­mark, after fathering a child in the U.S! Then he suic­ided in 1895 after being diagnosed with syphilis, when Karen was only 10. 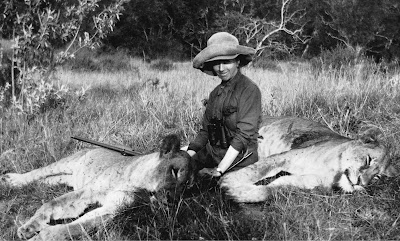 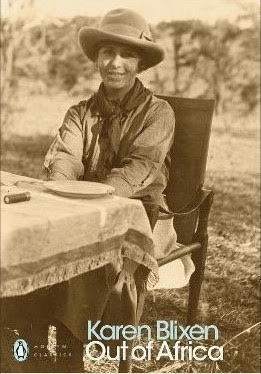 Out of Af­rica
published in 1937
Karen went to the Royal Acad­emy of Art, Cop­enhagen, then spent her time studying in Paris, London, Rome and Switzerland. The foll­owing year she was accept­ed by the newly established women’s school at the Royal Academy of Fine Arts. Later as a writer, she wrote eloquently in both Danish and English, pub­lish­ing her short stories in various Danish period­ic­als in 1905!

In 1914 in Mombasa on the Eastern African coast, Dinesen marr­ied her Swedish cousin, Baron Bror von Blixen-Finecke, giving her the title Baron­ess Karen von Blixen-Finecke. The young couple oper­at­ed a cof­fee plant­at­ion gifted by their two fam­il­ies, and life for them was initially blissful. But the passionate ideals that the cou­p­le began with in Af­rica changed into chal­lenging hardships. They had formed a comp­any just as WW1 started, when the Ger­m­an-Brit­ish fighting in British East Africa created a shortage of workers and supplies.

Gregarious Bror was frequently away on safari, yet it was during this first year of marr­iage that Karen con­t­racted syphilis from the un­faithful Bror. Back then syphilis was treated with arsenic and mercury, treatments that con­tributed to her declining heal­th over the years. The couple separ­at­ed in 1921 and were div­orced in 1925, with Karen being left to run the prob­lematic coffee plantation. Bror was dismissed from his position in the Karen Cof­fee Co, but runn­ing the financ­ial­ly troubled farm alone was a daunting task for Karen.

While still in Africa, Karen fell in love with English big-game hunter Denys Finch Hatton, with whom she lived from 1926-31. They never married because of Karen’s health issues, and after sev­eral miscarriages, she was sterile. Worse, their relation­ship suddenly ended when Finch Hatton’s plane crashed in 1931. This trag­edy, com­pounded by the failure of the coffee plant­ation during the Great Depression, damaged Dinesen's heal­th and finan­ces. She was forced to sell the Karen Coffee Co. to a resident­ial dev­el­oper and had to ab­andon her beloved farm in 1931. In saying goodbye to Af­rica, she knew she’d never return again.

After returning to Denmark in 1931, Blixen completely immer­sed her­self in writing. Originally written in Afr­ica, Seven Gothic Tales (1934) was published in English under the name Isak Dinesen. Then a Danish version followed. Gothic Tales was a master­piece when it was first published in U.S and Britain, but failed to be celebrat­ed in Denmark.

Blixen’s second and best known memoir was enormously successful wh­ich established her esteemed reput­ation. Out of Af­rica 1937 was a semi-auto­bio­graph­ical book in which she told of her Kenyan years. But she didn’t share the sordid de­tails of her marr­iage and her aff­air with the English hunter. This book vividly des­cribed pion­eering a coffee farm, and the So­m­ali and the Masai tribes in Kenya.

When the Nazis occupied Denmark in WW2, Blixen started to write Win­ter's Tales (1942) which was smuggled out of the occupied country through Sweden. When the U.S joined the war, a pocketbook edition was given to soldiers fighting in the war. Then she wrote The Ang­elic Avengers (1944), her only full-length novel, one that alluded to Nazis horror.

Her writing during the 1950s consisted of story­telling that she began in Africa. The most famous was Babette's Feast (1950), looking at an old cook who was not able to show her true skills un­til she got a chance at a celebration. An Imm­ortal Story (1958), in which an elderly man tried to buy youth, was adapted onto the screen in 1968 by Orson Welles.

Blixen suffered permanent ill health eg loss of leg sensation that ?was due to use of arsenic as a tonic in Africa. She also suff­ered from panic attacks, describing it as walk­ing in a nightmare. Her health continued to deter­ior­ate into the 1950s; in 1955 she had her stomach reduc­ed due to an ulcer and writing became impossible. What­ever the truth about her diag­nos­es, the stigma attached to this ill­ness suited the Baroness’ purp­ose in cultivating a mysterious pers­ona for her­self. She died in 1962 at 77.

Karen Blixen received the 1950 Danish Ingen­uity and Art Award. She was nominated for the Literat­ure Nobel Prize twice, (1954, 1957); she was also shortlisted for 1962 Nobel Prize but owing to her sudden death, became inelig­ib­le.

In 1985 a film based on her autobiography, Out of Africa, opened and won 7 Academy Awards, including Best Pic­ture.

Blixen lived at the family estate Rungsted­lund, near Cop­en­hagen. This old estate had been operated both as an inn and a farm, then it opened to the pub­lic as a Mus­eum in 1991. 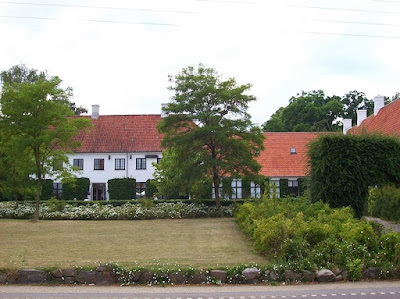 Museum  of Rungsted­lund,
near Cop­en­hagen.
Her old Kenyan home Bogani House was home to various families until it was bought by the Danish government in 1964 and given to the Kenyans to mark Independence. The Nat­ion­al Museums of Kenya eventually acquired the house and furniture that Blixen had sold decades before. The Museum was opened in 1986, with farm tools including a contemporary tractor, wag­ons, ploughs and an orig­inal coffee proc­es­sing factory equipment. Tours are offered each day by multi­lingual guides, and the museum shop has a wide select­ion of pos­t­ers and post­cards, films and books.

Karen, the Nair­obi suburb where Blixen had lived and op­er­at­ed her Kenyan coffee plant­ation, has a Karen Blixen Coffee House & Museum! 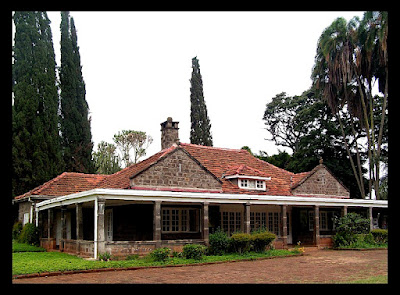 Blixen Museum in Kenya
was opened in 1986
The best blog post is Poetry of R.E Slater.

Lists of African novels for High School Students did not necessarily include "Out of Africa", but in high school, our English teachers would have disagreed.

Why did Blixen write some of her books directly in English, if Danish was her first language. Surely it would be easier to write in Danish, and then do her own translating into English.

It seems, writing has both saved her life and made her famous.
I've heard about 'Out of Africa" movie, but unfortunately, not viewed it.

"I had a farm in Africa at the foot of the Ngong Hills." It was a great book and a good film. I think I read a biography many years ago. Thanks for the reminders of Blixen's life.

I wonder how the choices were made for the Lists of African novels for High School Students:
https://www.goodreads.com/list/show/133069.African_novels_for_High_School_Students. Happily both "Out of Africa" and "Cry, the Beloved Country" were set readings in my high school.

Paton's "Cry, the Beloved Country" was the story of a Zulu pastor and his son, set against the background of a land and a people riven by racial injustice. It was a classic work of love, hope, courage and endurance.

Karen Dinesen Blixen lived in Kenya during the 1914-31 years, so by that time, English was her every day language. But the question is an interesting one. Even if we know the grammar, spelling and vocabulary in our second and third languages perfectly, do we pick up on the nuances and subtleties as well as we do in our first language? Blixen's English was perfect in
Out of Africa, but ever so slightly more formal than other peoples'.

I realise that films are as much the creation of the director as the writer's, but it would be well watching both "Out of Africa" 1985 and "Babette's Feast" 1987 when you can. Very different from the films we normally saw back in the 1980s.

Before Scandinavian books, films and tv shows became very popular towards the end of the century, I don't remember very much from that part of the world at all. Except, as you say, Karen Dinesen Blixen's contribution.

I know Karen Dinesen Blixen wrote originally in Danish and English, but were her books later translated into other languages and sold around the world?

The house's long and interesting history started around 400 years ago when it served as an inn conveniently situated on the Shore Road, the shortest route from the capital to Elsinore, an important trading town and port.

Thank you. I knew that the Foundation was to be financed by moneys from her book sales. But I had know idea that by 1962, the foundation was already struggling to maintain the property's intended role.

thank you. I think I have a lot more reading to do now :)

Dearest Hels,
It is a sad view to see lions and other exotic animals being shot—just because of the big game hobby of people that feel elevated.
Hugs,
Mariette

Mariette
I agree with you 100%. But we should be very grateful that Karen Blixen was such a great observer of life in Kenya from 1914 on.

Dearest Hels,
Of course we must acknowledge that but still don't have to agree with the exotic animal killing—neither with their morals lived by...
Hugs,
Mariette

Hi Hels - one of the most 'moving' filmed stories out there ... very evocative music, while always reminding me of my days in Africa ... cheers Hilary

what more could a reader ask for? - emotional stories, evocative music and warm memories from a life lived abroad.

In the next few weeks I will write a film review for an Israeli film that I saw. It melted me to tears for the years I lived in Israel, something that rarely happens in books or films.

Out of Africa was the first date my now husband of 38 years and I had !! It was a great movie . I wonder what happened to Bror .? Syphilis was such a scourge . I read somewhere that the high infant mortality rates of the pat were partly due to babies being born with Syphilis. This was apparently true where couples had consecutive children who all died. I don't think that we have any idea of how common this disease was and what a toll it took on the "innocent"

I too remember the first day my now husband and I met, very fondly. He was sitting at a bridge table in Ballarat, along with 2 other men, waiting for a 4th person to come and start the game. It was me :)

Now back to the film. It didn't shock anyone that Baron Bror was away all the time on safari, and that Karen quickly con­t­racted syphilis from her un­faithful husband. But what sort of creep was he, not to warn his young wife about unprotected sex, to divorce her and leave her forever childless, and to dump the farm on Karen alone.