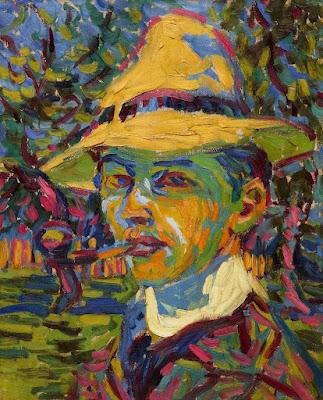 Kirchner Self-portrait with a pipe, 1907.
Photo credit: Sotheby's.
German Expressionist Ernst Kirchner (1880-1938) painted Self-portrait as Soldier with Pipe (1907) while involved with the avant-garde Die Brücke movement that he’d recently co-founded. The first owner of the work was his cont­emporary and co-founder of Die Brücke, Karl Schmidt-Rottluff.

Painted early in Kirchner’s career, the work was the art­ist’s first self-portrait, showing the artist and pipe painted with vib­rant brushstrokes. It marked the be­g­in­ning of a body of work that proved very sig­nificant for the art­ist. 25 oils bore the art­ist’s likeness, either his figure al­one or as part of a couple; of these paintings two thirds are held in museum col­l­ect­­ions. As an image of young confidence, The self por­t­rait off­ered an impressive insight into Kirchner’s artistic vision and showed his role as a leader among artists who came to see their life ex­per­iences as subject matter for art.

German expr­es­s­ionism emerged in Dresden in 1905 through Die Brucke, whose foun­d­ers in­cluded Kirchner and Emil Nolde, both of whom are rep­resented in Euro­pean Masters: Städel Museum. These artists developed a style that was abst­racted, dark and reflective of their psycholog­ical state. They pursued a pur­ity of form and colour, thus creating a truly German way of looking at the world.

The artists told of the emotional drama and pain of war eg George Grosz who volunt­eer­ed for army service in 1914. Then Dix, Beck­mann, Kirchner, Corinth & Marc also became soldier-artists. Kir­ch­­­ner act­ually suff­ered a break down in 1915, thus his discharge from the German Army.

Later Self-portrait was bought by Hugo Simon, a Berlin-based banker and polit­ic­ian in 1931. This important patron-collector was assemb­ling a fine art col­lection, starting with French classicism and ending with major examples of German & Austrian Express­ion­ism. Simon was a friend and benefactor to many art­ists, as well as being on Berlin’s Nation­al­gal­erie acq­uis­itions committee.

Only when facing Nazi persecution did Hugo and Gertrude Simon flee Ber­lin in 1933, travelling with the children to Nice and then to Mall­or­ca. They fin­ally settled in Paris where Simon re-est­ab­lished his bank and was active in organising the resist­ance movem­ent. They left Paris just bef­ore the German occupation in 1940, going to Marseille and on to Portugal, before emigrating to Brasil in 1941. 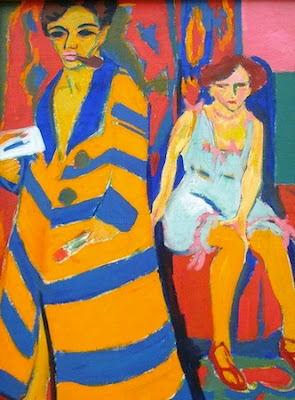 Ernst Ludwig Kirchner, Self-Portrait with Model,
150.5 x 100 cm, 1907
Hamburger Kunsthalle
Simon’s extensive art collection, which included examples by Edvard Mun­ch and Camille Pissarro, was dispersed in forced sales and conf­is­cations after he left Germany. His heirs tried to recover many of the work from the collection eg a landscape painting with nude figures by another Die Brücker Max Pechstein, was taken from Simon’s Paris home and returned to his heirs only last year.

Nazi prop­aganda ensured that the notion of Un­healthy People became a common concept among the general popul­ace. It could then be easily dir­ected at intellectuals, artists, Jews, Comm­un­ists and all op­ponents of the Reich’s philos­ophy. This was very iron­ic. Germany had em­erged as a leading centre of the avant-garde in mus­ic, art, film and ar­chitect­ure, especially the Die Brucke Group: Otto Dix, Arn­old Sch­oen­berg, Kirch­ner, Kurt Weill and Fritz Lang. But the Nazis view­ed Weim­ar Culture with re­act­ion­ary disgust, partly from con­servative aesth­etic taste and partly from a plan to use culture as a prop­a­ganda tool. See what happened to The Brücke Painters in the Nazi Period.

Self-portrait with Pipe was exhibited at the major Kirchner retrosp­ective in Zurich in 1952 and later at the Carnegie Institute in Pit­tsburgh. In this era the work also appeared in a number of pub­licat­ions including Peter Selz's important survey German Expressionist Painting. It was then acquired by Texan heiress-philanth­rop­ist Anne Burnett Tandy. A major collector of modern art, Tandy was also an im­p­ortant patron, a trustee for some leading American institutions inc­luding N.Y’s Museum of Modern Art. Her collection covered works by Picasso, Mond­rian, Miró and Matisse, many of them don­ated to museums.

This work rem­ained in her collection and was sold with her estate in 1981, acquired by current owners’ family. It was last exhibited in the 2007 show Vincent van Gogh and Expressionism, held at N.Y’s Neue Galer­ie and Van Gogh Museum Amsterdam. The exhibition high­lighted van Gogh’s in­f­luence on Kirchner, who ident­ified with Van Gogh’s pers­on­al struggles.  He must have; in 1938 Kirchner committed suicide by gunshot.

Kirch­ner’s self-portrait was offered in a public auction as part of a legal agree­ment with the heirs of its or­ig­inal German Jewish owner, Hugo Simon and the U.S. based owners, who bought the work at Sotheby’s 40+ years ago in 1981. At Sotheby’s Lond­on 2022, Self-Portrait with a Pipe was expected to fetch $10-$14 million but it was passed in. 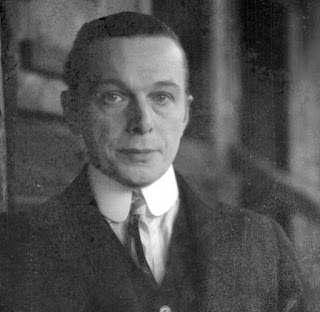 Both never married, both in mental health facilities and both suicided by gunshot. van Gogh and Kirchner both met tragic ends.

it was problematic after WW2 and still seems too difficult to resolve all these decades later, yes. In the chaos of war and with the Nazi plan to destroy or sell ALL degenerate art, no-one knew who had taken the Cubist, Futurist and Dadaist etc works. And since the original owners had already died during the war, no-one knew who would have been the rightful heirs. So the new owners probably bought art in good faith.

I too hope that precious art is returned to the true heirs.

But I hope that Kirchner didn't copy van Gogh's dangerous life style choices. I think Kirchner's mental breakdown during WW1 was never really resolved and his addictions to booze and morphine were even worse. But the last impossible period in his life was when the Nazis took away most of his art works, and he was expelled from his homeland.

Kirchner created a poster for the Die Brücke exhibition at the Arnold Gallery in Dresden just after the paintings you showed in the blog. To me, the poster looked crude and alienated, not at all like Self-portrait with a pipe.

I like the vibrant colors in the two self-portraits of Kirchner. They indicate self-confidence. No hint at his later breakdown and addictions. Tragic outcome with his art works being taken away by the Nazis, and he, himself being expelled from his homeland!

Not a bad painting. There was an epidemic of cartel morphine greatly enriched by American prohibition. The Dems in 1924 added a plank decrying heroin addiction among youth. To impress prohibitionist China, the US added laws and pushed treaties. The 1912 antiopium convention gathered most of the signatures needed for ratification by 1914. Just then, wars in the opium-growing Balkans following the glut brought on by even tougher Chinese prohibition became WW1 and prices increased admirably. Herbert Hoover pushed a narcotic limitation convention that managed to gather the necessary signatures on July 13, 1933. The following day, the Hitler government outlawed all political parties except the national socialists. Even in 1907, the USA had instituted drug labeling laws in reaction to a Chinese boycott in part brought on by catalog sales of narcotics. Non-narcotic drugs are not addictive. Leaving them be causes neither crashes nor wars. Perhaps Kirchner's red eyes gave lawmakers the wrong idea.

Die Brucke art was intended to provoke emotional responses in people who saw the paintings and posters. So distorted shapes and very strong or unnatural colours would certainly grab a person's eyes, even if the art was not necessarily to his/her taste.

Quite right. 1905-8 were happy and creative years in the German art world. World War One brought the terrible tragedies, and then the rise of Nazism in the 1920s.

Do you believe that American drug practices had an impact on German artists before, during and after WW1?

are you familiar with the Die Brücke movement, including Ernst Kirchner and his first colleagues?

The poor man probably had PTSD . I think his subsequent problems point to that .its amazing how much Germany reacted to the Weimar republic and its "liberalism " Maybe the middle road is the better one and safer when we look at the big picture of history .Nothing seems to energize intolerance like a flowering of imagination and openness. We seem to undergoing another reactive period at the moment maybe now again economic conservatism and failure to think of anything other than economics as an indicator of wealth and wellbeing .

Good thinking. Although I understand why the Nazi Government retrospectively blamed every crisis on the Weimar Republic (1918-33), it seemed more like myth-making than proper historical analysis. But once most people accepted the damage caused by pre-Nazi governments, the Nazi government allocated huge amounts of money and energy to eliminating the architecture, literature, arts, music, education curricula of the past.

I don't think attacking the Weimar Republic was merely reactive.. I think it was proactive and merciless. And I agree that it could happen again in the modern world where economic conservatism could lead rewriting history, intolerance and censorship