Far N.E China, close to Russia and Mongolia.
Often -30C
Jews have lived in China for centuries. But the story of Harbin, in a remote province of NE China between Siber­ia and North Korea, began with a modern rail­road. As late as 1896 there were only small fishing villages on a river. Amazing, since Harbin today has a population c10 million!!

That year Russia received a conces­sion from China to build part of the Trans-Siberian Railroad through Manchuria, the vast, icy and barely populated region of NE China. And then shortening the trip from Moscow to Vlad­iv­ostok.

Railroad officials quickly realised that they could not depend on local Siberians to build a new town. They needed experienced Russian-speaking entrepreneurs who would move to Manchuria. The railroad admin­istrator, Gen Dmitri Khorvat, saw the pogroms in Russia were already driving endless Jews away. Getting cap­it­al and talent to Manchuria meant Jews could live without anti-Semitic restrictions.

The Skidelskys were Siberian Jews who pro­v­ided the initial capital for Harbin. Leon Skidelsky held the con­t­ract in 1895, prior to Har­b­in’s founding, to build the Trans-Siberian Railroad from Manchuria to Vladivostok. The Skidelskys owned 3,000 square ks of timber in Siberia and Manchuria, and enough mining property to make them one of the region’s largest employers and railroad suppliers.

The first Jews arrived in 1898 and built their comm­un­ity from 1903, by which time Khorvat’s plan was working well. Jew­ish entrepreneurs created Harbin’s first hotels, banks, insurance companies, chemists, shops and pub­lishing houses. The Modern Hotel in Central Ave was built by Jew­ish ent­repreneur Joseph Kaspe in 1906, the height of Manchur­ian chic that was loved by celebrities and diplomats. The hotel had China’s first cinema. Today the Modern Hotel  is still a large pink stone building with arched wind­ows and turrets, and Cyrillic let­tering. In the lobby there is a bronze bust of Joseph Kaspe, family photos and their silver art objects.

These founders were joined by Jewish ref­ug­ees fleeing the 1905 pogroms, helped by the Jewish Free Kitchen (1907). The Old Synagogue was built in 1909, when 12 of the 40 members of Harbin’s City Council were Jews. At its peak, the Jewish population was 20,000. 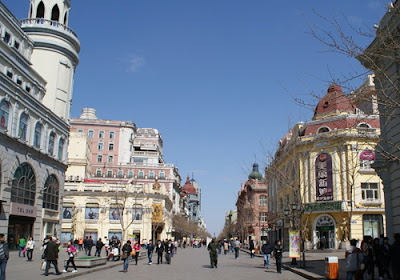 Central St Harbin, named in 1928
Visit Our China
In 1913, Chief rabbi of Harbin was R' Alexander Kisilev (1866-1949), author of books published in Russian. Family dynasties, like the Skid­elskys and others, played an imp­ort­ant role in development of the local wood and coal industries. They were also instrumental in ex­panding trade relat­ions with the Russian empire as well as Europe.

By 1921 there was enough demand for a New Synagogue a few blocks away. Add­­itionally there was a kosher butcher, ritual bath, mat­zo bakery, Jewish primary & secondary school, hospital, char­ity kit­chen, free loan association, old-age home, magazines, Jewish music and theatre, and Zionist youth clubs. After WW1, 20 Jewish newspapers were established - most were in Russian, except a few in Yiddish.

The Jews raised the city's status as a cultural hub. In the 1920-30s, many renowned Jewish artists visited Harbin to perform. These shows helped promote the spread of Western music in China, raising Harbin’s status. Even today, the Jewish influence on Harbin's music education remains. At its early 1930s peak, Harbin’s Jewish community had c20,000. 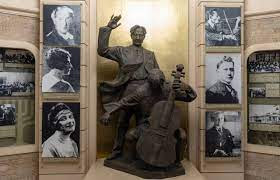 The Japanese invasion of Manchuria began in Sept 1931 when the Empire of Japan’s army invaded. They took Harbin in Feb 1932. At that time the flood of Russian Revolution refugees included 100,000+ anti-Communist, anti-Semitic White Russians who settled in Harbin. They formed the Russian Fascist Party that coll­aborated with the Japanese in their anti-Semitic, anti-Russian actions. One of the Fascist Party’s terrorist acts was to burn down the Old Synag­ogue. And from then on, Harbin’s Jewish community shrunk.

By 1949 Chinese Maoists controlled Harbin. The Jews in town were gradually stripped of their businesses and live­lihoods, while Israel’s government made secret contact with Harb­in’s remaining Jews and began arranging for them to leave. Harbin’s Jewish Golden Age had lasted from 1900-50. In 1958, Harbin’s local government was redesigning the city and decided that the Jew­ish cemetery need­ed moving. The city offered families to move their dead relatives’ graves to the site of a large Chinese cemetery called Huang­shan, an hour’s drive outside the city. The cem­et­ery’s Jewish graves are com­pact and stately, with elabor­ate Jewish graves carved in Hebrew and Rus­s­ian. Inside the gate is a gran­ite Star of David sculpture and a 2-storey domed chapel, built for Harbin-born Prime Minister Ehud Olmert’s 2004 visit. 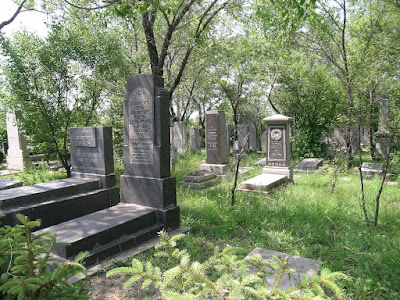 Graves in Huangshan Royal Hill Jewish Cemetery,
moved from downtown Harbin in 1952
Credit: Modern Harbin Photos
The last Jewish family left town in 1962. Today an older Israeli newsman, Dan Ben-Canaan got a permanent job at a Harbin Uni in 2002. Ben-Canaan’s research into Harbin’s Jewish past has made him indispensable in restoring sites. When he learned that Harbin’s government blocked the Jewish com­munity’s official archives, Ben-Canaan recreated the archives by collecting photos, memorabilia and testimony from former Harbin Jews and their descend­ants.

In 1992 social scientist Zhang Tiejiang discov­ered the prior Jewish owner­ship of many historic homes that he was supposed to demolish for a city-planning project. So he studied the records. His timing was great: 1992 was the year China est­ablished dip­lom­atic relations with Israel! Zhang Tiejiang published his “Study of Harbin Jews to Quicken Heil­ongjiang Economic Development” in 1999. A Centre for Jewish Studies was established at the University. Since then, the govern­ment’s $30 million budget was to renovate or recon­struct its Jewish buil­d­ings. Each has a Heritage Architecture plaque.

The New Synagogue Jewish Museum is great. The Jewish history exhibition fills the second floor, the old women’s gallery. Over the alcove where the Torah scrolls ark once stood, there is a set of rooms where photos of the Jewish indust­rial­ists included the founders of a sugar refin­ery, soybean export business, lolly factory and Chinese brewery. The renovation of the Old Synagogue and the Jewish secondary school look to be exactly replicated. The ark has a granite Ten Command­ments, pillars, women’s gallery and seats. Only the bimah was widened, enough to accommodate a chamber orchestra.
I thank and recommend Cities of Ice by Dora Horn, 2019.

I was in the same year at school as two Russian families who moved to China. The parents spoke very fondly of their years there. The children born after WW2 didn't remember anything.

This is an absolutely fascinating story, of which, I knew nothing at all. I'm not sure that I had even heard of Harbin! I read all of Dora Horn's Cities of Ice and it made me wonder how many other outposts of Jewish life are still relatively unknown around the world.
It's a story that illustrates the amazing resilience and survival skills of Jewish populations.

No wonder your friends' parents loved Harbin. Those Russians made a huge difference to Harbin, starting from building the Trans-Siberian Railroad from Manchuria to Vladivostok, and then opening every facility that a modern city would need. The difference was the Chinese really welcomed them and made them feel supported.

In most countries, these days, refugees and other migrants are not welcome at all, or are locked away in camps until they finally succeed in obtaining visas. Our loss :( Refugees are keen to succeed and usually make wonderful new citizens.

But I would barely know how to point out Manchester, St John's and Buenos Aires are on the map :(

Amazing, informative post! (Thanks for the link to Dora Horn).
I knew about russian jews in China, but no details until reading your post.
Dora Horn wrote something like 'It's good until it's not'. The Jews in Harbin flourished until
they melted away. It happens almost everywhere. Why?! I suspect, we jews, for some genetic reason, can never really see the writing on the wall and so, always get caught in trouble.

I didn't analyse the end of the Harbin’s Jewish Golden Age (1900-50) because the various historical sources (Japanese, Chinese, Jewish) give very different reasons and responses. So perhaps we should compare Harbin's community with those of Shanghai, Tokyo and the border city of Birobidzhan.

It is rather unfortunate that China took such an attitude to the Harbin Jewish population but I guess such Jewish entrepreneurism did not fit into their 'ideal' society. Harbin and parts of China have a lot to thankful for to the immigrant Jews.

Fascinating how countries change, ins't it! I am not at all sure where the hostility came from, but the environment only started changing with the Japanese invasion of Manchuria. The Empire of Manchuria was founded as a republic in 1932, a puppet state of the Empire of Japan and naturally it filled by a HUGE number of supporters of the Russian Fascist Party.

The Chinese Maoists controlled Harbin only from 1949 on, and by that time, it was way too late to save what had been a wonderful community.

Hi Hels - thanks for this ... I've been wondering about their historical life ... so I'll get the book ... it sounds very interesting ... thank you - Hilary

the book is well worth borrowing or buying. But it seems to me that Dora Horn believed the families who loved living in Harbin (and other refugee cities) overstated their heaven. She may not have spoken to the families who lived there right up to the start of WW2, people who felt very well supported and safe.

Hello Hels , I had some inkling of Harbin because my uncles father ran off to Harbin from 1930s Germany with his invalid wife's doctors teenage daughter !! They ran off through Russia and the ended up in Harbin before finally getting to Sydney where they were interred as enemy aliens at the outbreak of war . I always felt sorry for Ilse but not for him . I think he was 40ish and she was 17 . He left his wife and children behind to survive the war which they miraculously did. They had 2 more sons here in Australia. while interred .
I didn't realize what a lovely place Harbin must have been . I did know that they have an annual ice carving Festival which apparently is amazing .
I also wonder at the anti Semitism and the fact that the Skidelsky family amassed such a fortune in such a hostile environment . How did that work??

we are all supposed to be connected by 6 degrees of separation, but your uncle's father's wife's doctor's daughter makes us much much closer. But if he ran off to Harbin in the 1930s, it might have been because your relative was a very naughty man!

Re last question, the Skidelskys were one of the leading Jewish-Russian families in the far east. The family biography says Leon Skidelsky started his career in Skidel (now Belarus). Then he moved to Odessa on the Black sea (near where my grandma grew up). The Russians wanted growth in Siberia and didn't give a hoot about anti-Semitism; they were delighted to give Leon a contract to build the last stretch of the Trans-Siberian railway to Vladivostok. By WW1 Leon's family owned residential, industrial and mining property in eastern Siberia, and ginormous timber concessions in Russia and Manchuria. The family firm supplied coal to the Chinese Eastern Railway and exported timbers to western Europe. Russia's eastward expansion was very well served!!