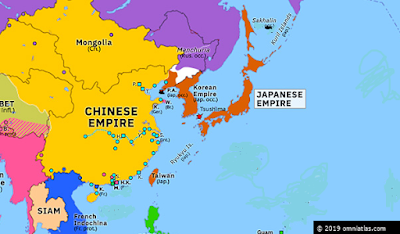 Purple = Russian Empire,
brown = Japanese Empire and
yellow = Chinese Empire
Press to see Port Arthur and Sakhalin Island marked in black
The Russians entered the region in the Sino/China-Japanese War of 1894–5. Along with Germany and France, Russia was a part of the Triple Int­er­vention that forced Japan to give up its demands for ports in S. Manch­uria & Liaodong Peninsula after the war in China. After Russia leased the strategically important Port Arthur (see map) on the Ch­ina coast in 1898 and expanded into Manchuria N.E China, it faced the incr­ea­sing anger of Japan. So Russ­ia took total control of Port Arth­ur, a warm water port with strat­egic & commercial signific­ance. A Jap­an­ese coup in adjacent Korea was partly thwarted by the Russian pres­ence there, and the 2 nations’ different interests appeared increas­ing likely to clash.
With the Russian fleet inside Port Arthur, and Japan in com­mand of the China Sea, the Japanese then overran Korea and invaded Manch­uria, gaining ef­f­ective control of both. Tsar Nich­olas II (reigned 1894-1917) was stun­ned by the attack, having been assured by his ministers that Japan would not fight. Why did Tokyo risk an all-out war with Russia, esp­ec­ial­ly as a peaceful compromise already seemed possible?

In Ap 1904 ten Jap­an­ese dest­royers sudd­en­ly fired torped­oes at Russian battle­ships in Port Arthur, alarming the Rus­sians and badly dam­aging the Russia’s largest ­ships. The formal declaration of war was received in Moscow, shocking the Russian navy. Inevitably the two forc­es clash­ed in Korea and the Sea of Japan, with the Japanese victorious, after the 2 nations had endured years of disputes over Man­ch­uria.

When Russia reneged on its agree­ment to withdraw troops from Man­churia, the Japan­ese fleet faced the Rus­sia naval squadron at Port Arth­ur and the Japanese land forces cut the Rus­s­ian army off from coming to Port Arth­ur’s aid. The Jap­anese 3rd Army with 150,000 men and 474 artillery guns laid siege to Port Arthur itself. The heavy death rate meant that in Oct, the Russian Baltic Fl­eet set sail to the Far East. But war casual­t­ies were appalling on both sides; at the Muk­den Battle in Manchuria in Mar 1905, Russia lost 60,000 sold­iers while the Japanese lost 41,000.
Port Arthur surr­endered in Jan 1905, set­ting off angry protests in Russia against Tsarism. Immediately the Rus­sian comm­ander surrendered the garr­is­on without consulting his officers, despite enough ammun­it­ion for its continued def­ence. The decisive naval Battle of Tsushima (May 1905) gave the Japan­ese the upper hand and forced Russia to the peace table. A Rus­sian fleet sailed from the Baltic Sea around Af­rica and Ind­ia, on­ly to be half destroyed by the Japanese on arr­iv­al in N.E Asia. By 1905 the comb­in­­ation of these losses, and the huge eco­nomic cost of fin­ancing the war, encouraged both countries to search for peace. 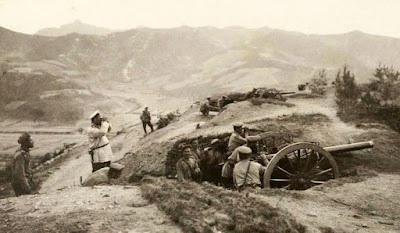 Battery of Russia's 6th East Siberian Artillery Brigade,
June 1904.
Photo credit: All World Wars
The Japanese asked U.S Pres Roosevelt to negotiate a peace agreement, and representatives of both nations met in Portsmouth New Hamp in 1905. In or­­der to maintain the balance of power and equal econ­omic opportunity in Northeast China, Roosevelt preferred that the war end on terms that left both Russia and Japan a role to play. Though excited by the Japanese mil­itary victories, Roosevelt worried about the consequences to American interests if Japan managed to drive Russia out entirely.

The negotiations centred on access to ports and territories in Manchuria and Korea, control of Sakhalin Island (see the map), and the question of who was resp­on­sible for paying war costs. The chief aims of the Japanese negotiator included a] control in Korea and South Manchuria, and b] the negotiation of an indemnity and control of Sakhalin Island. The Russians wanted to c] maintain THEIR Sakhalin Island. d] They refused to pay a war costs ind­emnity to the Japanese, and e] hoped to maintain their fleet in the Pac­ific. The indemnity issue, and Sakhalin Island itself, were the major sticking points in the negot­iat­ion, although given its financial straits in 1905, Russia couldn’t pay an indem­nity anyhow. When negot­iat­ions stal­l­ed, Roosevelt prop­osed that Rus­sia buy back Northern Sakhalin from Jap­an­ese control. After long deb­ate, Japan eventually agreed to take only Southern Sakhalin, with­out ANY pay­ment. As a result, Pres. Roos­evelt won the 1906 Nobel Peace Prize. 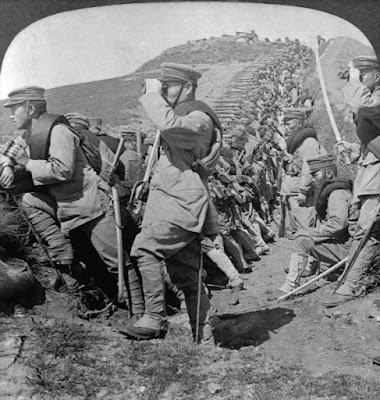 Japanese soldiers defending a trench in the Russo-Japanese War,
Manchuria, 1905
Reddit
The Treaty ultimately gave Japan control of Korea and much of South Man­churia, including Port Arthur and the railway that connected the port with the region. Rus­sian power was curtailed in the region, but it was not required to pay Japan’s war costs! Because neither nation was in a strong financial pos­ition to continue the war, both had to comp­r­omise for peace. Still the Japanese public felt they had won the war, and they con­sidered the compromise an insult. And the Rus­sian people were al­so dis­satisfied, angry about giving up half of Sakhalin.

In Sept 1905 Russia aband­oned its exp­ansionist policy in eastern Asia and the Russo-Japanese War ended. The final agreement aff­irmed the Jap­an­ese presence in south Manchuria and Korea, and ceded the south­ern half of the island of Sakhalin to Japan.

The 1905 Treaty of Portsmouth succeeded but what became of it? Throughout the peace talks, American public opinion had largely sided with Japan. Believing that the Japanese were fighting a just war against Russian aggression, and that the island nation was equally com­mitted to the territorial integrity of China, Amer­icans supported them. The final Japan­ese decis­ion to forgo an indemnity only served to streng­then U.S approval of Japan’s actions throughout the conflict. So Tokyo’s anti-treaty & anti-American protests after the treaty ratific­at­ion shocked Americans.

Japan’s military achieve­ments, along with the build-up of its naval for­c­es, saw the birth of Jap­an­ese mil­it­arism, paving the way for new territorial expansion in the Asia-Pacific. Russia's humiliating de­feat contributed to a growing unrest at home, concluding with the 1905 Russian Revolution.
Posted by Hels at 6.8.22

Rather complicated but well explained. It's always good to get some understanding about something you know of but have never really looked at.

I didn't know Japan had an Empire, way back then.

same here. I have studied and lectured over the years about cultural, religious, royal, political and travel history, but I never wanted to know about military history. It always ended in tragedy :( From the family I knew about the 1905 Russian Revolution of course, but I doubt that I would have ever known about The 1905 Treaty of Portsmouth.

But now that we are focusing so much on Russia, China and even Japan, the Sino-Japanese War of 1894–5 and the Japanese-Russian War 1904-5 have become much more relevant to (the 20th and) 21st centuries.

yes indeed! The Japanese empire started in 1868, when the emperor Meiji threw out the last shogun. Power remained in the Imperial House until the defeat of Japan in WW2 and the nation's new constitution in 1947. During that long era, the Japanese Empire included Taiwan, Korea, Manchuria, parts of northern China and many islands.

The americans, as usual, were naive about the Japanese. After all,later on, they had to throw the atomic bomb on Hiroshima , being so far, the only power stained with the use of the nuke.

Alliances were sometimes secret and often changing, so I suggest that even now historians are uncertain about other nations' responses during the 1890s-1905 era of churning power grabs.

Russia, Germany and France tried to stop Japanese expansion in China in the 1st Sino-Japanese War (1895) via the Triple Intervention. With the next war, France was obligated to support Russia while Britain was possibly sending funds, weapons and boots to the Japanese. In the Russo-Japanese War, it is possible that the Americans were much more fearful about growing Russian power than about what Japan might be doing back then, or into the future.

This information is slippery, I realise :(

the news this week, between China, Taiwan and USA, feels very much the issues being fought over in the Japanese-Russian War :(

Entertaining and informative as to blows exchanged, but explained nothing about what VALUE the war was fought to secure. In 1837 the Quing emperor showed opium traders the door. Capital was jerked out of the US and opium wars commenced, resumed 1857, again 1900 as China's domestic prohibition kindled revolt and upped prices. Hard to expect Russia to resist drug-running--especially since the Brits farmed it out to Japan. In 1903 America's "Silent Panic" coincided with Chinese boycotts of US goods, some of which contained unlabeled opiates. Great effort goes into eliding and blinkering this inconvenient history, but Imperial fanaticism--like America's Prohibition 15 years later--hiked prices to irresistible levels. WW1 is indeed more credibly Germanic Big Pharma's reaction to The Hague antiopium Convention than to anarchist youths shooting yet another befeathered Poobah. See "Prohibition and The Crash"

thanks for your response. I am still mesmerised by the idea that imperialist expansive nations will inevitably clash, eventually ending in war. This wouldn't have surprised us when Russia planned imperial expansion, or Germany, France, Britain etc. But the clash between Russia’s with Japan’s imperialist goals in northeast Asia, might have surprised us.

Secure continental domination was difficult to win within one war. And even when a truce was declared, there was every reason to expect a new war in the near future.

Thanks Hels ... I appreciate the map ... and some more information about that part of the world - of which I know little. I've read about Bering and how Peter the Great sent him out to explore eastern Russia and across the Strait to Alaska. Thank you - Hilary

even if we did European and Russian history for all of high school and university, it doesn't mean we have a good geographic perspective on small countries, changing borders and the movement of different armies. Just knowing where Port Arthur is, and why it was so important, is critical.