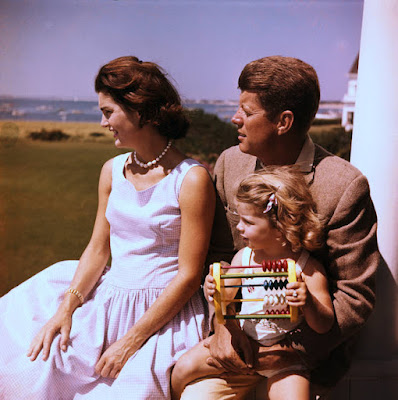 John F. Kennedy and Jackie Kennedy, and Caroline
townandcountry
Neil Diamond’s interest in music began at 16, when he got his first guit­ar. He studied at New York Uni, apparently intending to do medic­ine after. But he left college in his final year to take a job as a staff song writer for the Sunbeam Music Co. After a short time, he became one of the songwriters who worked out of New York’s Brill Building, important in popular culture.

In 1965 Diamond signed a recording contract with Bang Records, and one year later his debut album was released. Then he wrote the song I’m a Believer (1966), soon made famous by the Monk­ees. In 1967 Diam­ond sign­ed a new recording contract with Uni Records, with whom he recorded hits like Brother Love’s Travelling Salvation Show (1969), Sweet Caroline (1969), Cracklin’ Rosie (1970), I Am…I Said (1971) and Song Sung Blue (1972). I still remember every note of music and all the lyrics for these songs.

After joining Columbia Records, Diamond recorded the sound track for the film Jonathan Livingston Seagull (1973), earning a Grammy. He continued to release successful albums during the 1970s and in 1980 Diamond made his film debut; he starred in a remake of the film The Jazz Singer, for which he also wrote and per­for­m­ed the sound track. But I remember neither the music or lyrics for his later albums. In the C21st Diamond released albums until 2018, when he announced his retirement from touring.. due to Parkinson disease.

Diamond has sold 100+ million records worldwide, making him one of the best-selling musicians of all time. He was first honoured by the Song­writers’ Hall of Fame, on his induction in 1984. And was induct­ed into the Rock and Roll Hall of Fame in 2011.

Where it began, I can't begin to knowing
But then I know it's growing strong
Was in the spring
And spring became the summer
Who'd have believed you'd come along 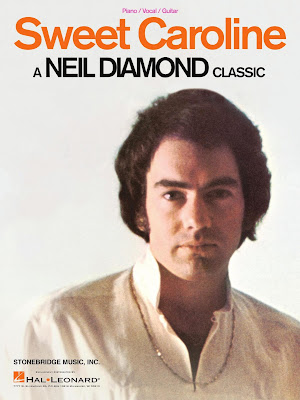 Photo Credit: Sweet Caroline Sheet Music
In a 2007 interview, Diamond stated the inspiration for his song was Pres John F Kennedy's daughter Caroline who was 11 years old at the time it was released. Appropriately Diamond sang the song for her at her 50th birth­day cele­bration that very year. Diamond said that a magazine cover photo of sweet young Car­oline dressed up in riding gear on a horse, with her parents in the background, created an image in his mind. And the rest of the song came together five years after see­ing the picture, while he was sitting in a Memphis hotel room for just one hour.

Arranged by Charles Calello and recorded at American Sound Studio in Memphis TN, the song was released in 1969. Clearly the song was hugely popular. It was Neil’s favourite record and probably the biggest, most important song of his career. Upon its release, the song reached #4 on the Billboard Hot 100. In fact 1.75 million copies of Sweet Caroline have been sold since it was written in 1969, which earns him up to $500,000 a year. For me, it is just a delightful memory of 1969, my last year as a single woman.

In 2013 Diamond announced that he would donate the royalties to One Fund Bost­on to help families affected by the Boston Marathon bombing.

Neil Diamond had previously announced his retirement from touring in 2018, cancelling his planned 50th anniversary tour to Australia. He revealed that he had been suffering from Parkinson’s dis­ease, explain­ing was diff­icult to travel and perform on a large scale basis. None­theless in 2020 Diamond started a global singalong of Sweet Caroline to help make people a bit happier, after a year of the COVID-19 pandemic. 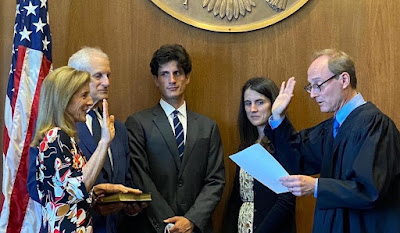 The Australian
The new U.S Ambassador to Australia, Caroline Kennedy, presented her credentials to the Australian Governor-General in July 2022. Perfect!
To see thousands of people in a sports stadium singing Sweet Caroline all together, see a Northern Ireland soccer game  from 2021. It is amazing!
Posted by Hels at 23.8.22

Neil Diamond had Australian connections, as we both remember. But so did Caroline Kennedy & Edwin Schlossberg. They honeymooned here and loved it.

But good on you for knowing about Caroline Kennedy and her husband. She told the SMH "Personally this means a great deal to me. My husband is here with me. We first came to Australia on our honeymoon 36 years ago. And then we were fortunate to come back with our children when we were in Japan." She clearly remembers this country very fondly.

That's a lovely story. For some reason - I don't know why - 'Sweet Caroline' seems to have been adopted as an unofficial anthem by fans of English football teams (men and women). This makes no sense at all to me - but it's a great, uplifting, song.

I have always sung along to his songs especially 'Sweet Caroline'. I never knew the inspiration was Caroline Kennedy and like Mike in the previous comment I have no idea why it has been adopted as a football anthem.

I was always used to British crowds singing "You'll Never Walk Alone" at football matches, where the words make perfect sense. The words encourage the crowds to join in, and fill the players with a sense of mass support. But I am not sure that the words of "Sweet Caroline" are suitable for dozens of sweaty, rugged men :)

American baseball fans, on the other hand, seem to love "Sweet Caroline" at Fenway Park and "YMCA" at Yankee Stadium.

Even as we get older, and the ability to remember our spouses' names fades, important music NEVER fades. Whatever the important years of your life were, usually from 15-25, you only need to hear a couple of musical notes from those years and you can sing along with all your heart. Remember the words of Song Sung Blue :)

Even when we are dementing later in life, Neil Diamond's music will remain

I am a huge fan of Diamond, having grown up with his music. A thrill for me was to hear it being sung at Fenway Park!!!

What a great idea it was for Neil Diamond to sing "Sweet Caroline" at Fenway Park on 2010's opening night. I don't know the first thing about baseball, but I do know that inviting 30,000 fans to sing together was both warmly inclusive and greatly energising.

That Diamond donated royalties from sales of “Sweet Caroline” to victims of the Boston Marathon bombings in 2013 made perfect sense. The connection between Sweet Caroline, Neil Diamond and Boston Red Socks must have been rock solid by then.

Whenever I think of the Kennedys I see mostly tragedy. And here, for a change, this lovely song for Caroline!
She is not only sweet, but more than that considering what she's been through (father's assassination, brother's plane crash, etc...). Neil Diamond's song is actually dedicated to someone who's literally a diamond.

I regularly go to West Ham United to watch football and they usually play Sweet Caroline as the crowd are filtering out of the (former Olympic) stadium. I always assumed that it was because it's a slowish, relaxing song which helps to keep the crowds calm.
He also wrote A Little Bit Me, A Little Bit You, The Boat That I row, Cherry Cherry & Red Red Wine.

I was never that fussed on his singing but he must recognised as a very talented singer, musician and songwriter.

bazza
I have seen all the West Ham videos.. they are not to relax people to move them out quietly. The mass singing is beautiful, uplifting, full of actions, emotional. I was feeling emotional myself, and I don't even support West Ham.

DUTA
Caroline Kennedy is a survivor from a wonderful family that suffered tragedy after tragedy. And she has dedicated herself to serving her nation, and doing it very well. Neil Diamond's radar was very sensitive, back in 1969.

Andrew
It all depends on the timing. The singer who you listened to faithfully and endlessly at 18 will still be in your heart at 60. Whether the words were a bit lightweight or not.

Diamond’s voice seems little damaged sofar by the neuro-degenerative disorder, Parkinson’s. He says he is singing better than ever, probably because he is not on the road singing with full power and destroying his voice. But Parkinson’s progressively causes nerve cells to lose function and die, so it is never good.

Hi Hels - thanks for the overview ... I had known none of it - except the obvious. I'm afraid Sweet Caroline has been taken over by the football crowds here - and so I've rather gone off it. But Neil Diamond's voice and songs I love. I must say I hadn't realised Caroline Kennedy was ambassador to Australia ... I caught up a little here - thank you! Cheers Hilary

the first celebrity with Parkinson's that I remember was Michael J Fox. But most people with P.D receive that diagnosis after 60, not under 30. Nonetheless Fox said that music is a powerful tool that can ease many of the worst elements of P.D eg speech, mood changes and even walking around.

However I am assuming the "music tool" is not useful for professional singers like Neil Diamond.

I also didn't know Caroline Kennedy was the new US Ambassador to Australia, until I saw her in the daily newspapers. Nor did I know they had had their honeymoon here, back in 1986, until Deb mentioned it. And until I started writing this post a few weeks ago, I had no idea that Sweet Caroline was taken over by football clubs over the last decade or more.

Sometimes the blogs and the readers' comments are more informative than the local newspapers :)

thank you for reading the post and yes, Neil Diamond was very cute back in the 1960s. But no advertising please.

did/do you sing Neil Diamond songs as a young man? Are you a soccer fan? If so, listen to the fans in the soccer stadium singing Sweet Caroline in 2021.

"Sweet Caroline" is a massive anthem and was huge during the recent UEFA Women's Euro 2022 which England won (I'm usually a South Africa fan but this tournament was so important for women!)

I read that he said in an interview that he wrote the song for his second wife Marcia but needed a three-syllable name for the song and that's when Caroline's name inspired him.

I too read that Diamond wrote the song for his second wife Marcia, but needed a three-syllable name for the song. So I hope Diamond's second explanation was correct. The reason that sports clubs seem to love the song, decades after it first appeared, might be the a] mass singing appeal of the music and b] the words:
Good times never seemed so good
I've been inclined
To believe they never would..

I have never seen men (in particular) standing up, singing loudly to their players and waving their hands in the air to music :)

My granddaughter told me this.

See the Green Day crowd singing Bohemian Rhapsody, live in Hyde Park in 2017. Decades after Freddie Mercury died, the Green day concert crowd (65,000 people) gave a word-perfect impromptu performance of Queen's hit, one of the most moving videos ever.

It was not a sports function, but I agree with her.