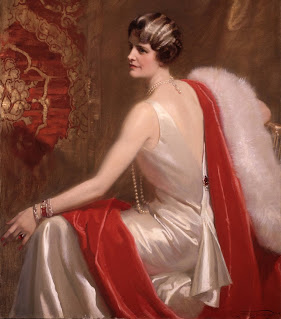 Businesswoman philanthropist Marjorie Merriweather Post (1887–1973) was born to wealth. And she made head­lines throughout her life. In 1905 she married husband #I, banker Edward Close and then her father’s death in 1914 left her in ch­arge of his cereal company, which she expanded.

In 1920 financier Edward Francis Hutton became husband #II and they soon developed a larger variety of food products, includ­ing Birds­eye Frozen Foods. By then she ranked as one of the USA’s rich­est women.

Built in the 1920s for another family, Post filled her fav­our­ite residence, Hillwood, with the C18th French décor­at­ive style she loved most. The neo-Georgian house had 36 rooms full of Sèvres porcelain, Gobe­lins tapestries, Aubusson carpets, chand­eliers with crystal pend­ants, 90 Fabergé treasures and portraits of aris­tocrats. Gilded furniture was set in tableaus, evoking the life of courtiers in C18th France. 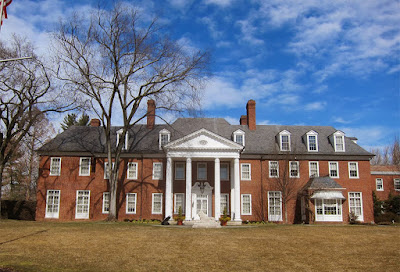 Her couture gowns have been pre­served, along with port­raits wearing them, photo alb­ums docum­ent­­ing her evolving fashion sense and décor, and almost every invoice. Her jewellery, often of royal provenance, was well displayed.

Marjorie Post and her husband de jour hosted glitt­er­ing parties for the leading political, diplomatic and cultural figures of the time, serving on dinnerware orig­inally made for the rulers of ancien rég­imes. Even in troub­­led times, her staff served feasts to visit­ing international dign­it­aries on her imperial dinnerware.
In the French porcelain room, highlights of the C18th Sèvres coll­ect­ion included a cylindrical cup (1770s) with Benjamin Franklin’s portrait. In the French drawing room, inter­­laced init­ials MA (? Maria Antonia Electress of Saxony) gleamed in mother-of-pearl across a rolltop desk made by Abrah­am and David Roentgen in 1770s Germany. Pop-up candlesticks and mirrors were concealed with­in its 40 compartments and secret drawers. Post’s marble-topped commodes, fronted in marquetry bouquets and pastoral scenes, were made in the 1770s by Jean-Henri Riesener. 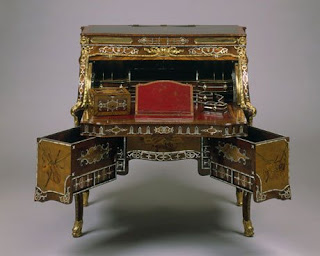 In 1935 she married husband #III, lawyer-diplomat Joseph Davies, and he was soon serving as the US ambassador to the Soviet Union. She collected religious and secular treas­ures that were being sold off by the Soviets, filling Hillwood rooms with these treas­ures.
A gold chal­ice, encrusted in diamonds & saints’ cameos, was made by Norw­egian gold­smith Iver Wind­feldt Buch  (1791) for Cath­erine II. Ribbed in diamonds  Fabergé’s cobalt-enamelled egg (1896) was Nich­olas II’s maj­or Easter gift to his mother after taking the throne. Plus a pink enamel Fabergé Eas­t­er egg the Tsar gave his mother in 1914. Thus the mus­eum included the most compreh­en­sive collect­ion of C18th &19th Russian imperial arts outside Russia. 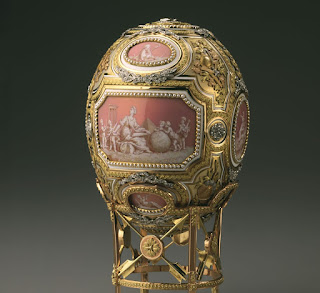 Catherine the Great Easter Egg,
Faberge, 1914
In 1958, Post's marriage #IV was to wealthy Pittsburgh businessman Herbert May. Other than the houses, Post left the bulk of her estate to her 3 daughters, Adelaide Close, Eleanor Post Close and Nedenia Hutton. In 1963 she bequeathed the estate, along with a $10m endowment to maintain it, to the Smithsonian Institution; it was to be maintain­ed as a museum, with spec­ific­ instructions. She established the Marjorie Merriweather Post Found­ation D.C to ensure compliance.
**When Post died in 1973, the Hillwood Estate, Museum & Gardens were left to the world as her opulent house-museum. House-museums were the homes of literary or historical stars. Or they might have been historical collect­ions housed in their orig­in­al buildings eg Frick Collec­t­ion in New York. These dom­es­tic set­t­ings drew people to visit the sites in which historical peop­le, arts and archit­ecture created a unique experience. So house-museums were the least institutional of arts institutions.
So how do we moderns respond to the personal collections in house-museums? They definitely offer a window into how the great collectors of the past lived, with works of art. And they rem­ind us that collecting-skills were specifically about the collectors’ personalities, preferences and even obsessions. And their obscenely high incomes, I suppose.

It was fascinating to follow famous dealer Joseph Duveen (1869-1947) who sold special art objects to aristocrats. Duveen was a skilled entrepreneur, an im­pass­ioned art lover. He made his fortune by buy­ing works of art from dec­l­ining European aristocrats and selling them to wealthy collectors in the USA. Marj­orie Post was just one such Amer­ican. Con­sider these other frequent buyers at Duveen’s galleries: Otto Kahn, And­rew Mellon, William Rand­olph Hearst, Henry & Arabella Hunt­ing­ton, Samuel H Kress, John D Rock­efeller, PAB Wid­en­er, JP Morgan, Isab­ella Stewart Gardner and Henry Clay Frick. What an elite group!

It was no coincidence that Marjorie had been schooled early in her coll­ecting career by Duveen. He met his clients when they were in their spending mode, in their efforts to raise themselves up, to show that sense of nob­ility that flowed in many families who were flush with money. 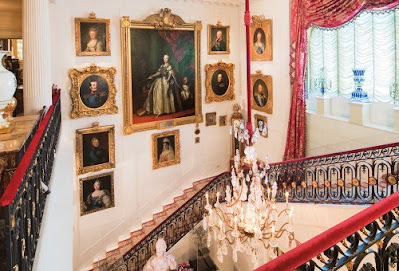 Royal Romanov family portraits
I have never passionate about C19th French paintings or furniture, but that is the risk a visitor takes by going into a private home that has become a museum. It was made into a museum to show the owner’s taste, not mine. So I treat house museums as a walk-in history lesson, created mostly by wealthy families from the C19th.
Post was a pioneering collector who bought Russian imperial art works long before they were valued in the US. These pieces demonstrated her insight into, and her great love of Russian culture – and mine! See the 3 finely embroidered mitres worn by bishops when performing the holy liturgy; and the icons and the 300 rare Russian books devoted to decorative arts history in Russian imperial culture.
Read how Post left her 128-room Palm Beach mansion Mar-a-Lago to the U.S government. Enjoy Marjorie Merriweather Post: The Life Behind the Luxury, 2019, by Estella Chung.

Apart from her collections, real estate and daughters, where did all that wealth go?

Hillwood has reopened, but you can continue to enjoy the museum and gardens from home through our comprehensive digital offerings, including the extensive online collection, educational video library, and immersive mobile app. Follow Hillwood on Instagram, Facebook, and Twitter for daily content.

Majorie Post was known as a major philanthropist in the US; she provided funding for the U.S., probably starting during WWI when and she built an entire army hospital in France.

She gave $100,000 to Washington’s National Cultural Centre, which ultimately became the John F. Kennedy Centre for the Performing Arts. She gave another $100,000 to the National Symphony for free concerts. This led to the creation of the Music for Young America Concerts, which she continued to fund every year. And she donated some of her vast estates to the government so that people might have the chance to enjoy and admire her vast art collections (see aibees).

many many thanks. I was in Washington DC a few times, but hadn't realised that the estate opened as a public institution back in 1977. Now I will have to leave more time to see the mansion, collections and gardens than I had originally planned.

I would also love to see the Grace of Monaco: Princess in Dior exhibition.

She was married four times! (well less than Liz Taylor:).
I like the photos displayed in your post (especially the facade of the Hilwood mansion).
I'm glad Marjorie Post gave away some of her huge wealth through philantrophy.

After Charles Post had made his fortune, Dr John Harvey Kellogg treated the man in Battle Creek Sanitarium and helped invent the first dry flaked breakfast cereal. So Marjorie Post was mega wealthy after her parents died when she inherited $27 million in 1914! Even though the husbands were wealthy, divorces made little difference to her. She had 300 staff for Hillwood and her two other estates, so she was well cared for, even in the loneliest times.

This generous woman dedicated herself to her alma mater, Mount Vernon Seminary and College. When the College was struggling, Marjorie Post leveraged her massive fortune to keep the institution successfully running for nearly 45 years.

Hi Hels - interesting ... I hadn't heard about her ... but was interested in the Russian connection. Thanks so much - cheers Hilary

Marjorie must have already loved Russian arts because, when she and her husband spent some years in Russia, she thought she was in heaven. Her Sacred Arts Gallery at Hillwood displays a great gallery, filled with Russian Orthodox ecclesiastical arts: icons venerating saints, communion chalices, vestments etc. And the Russian Porcelain and Glass Room at Hillwood is almost as amazing.

thank you. I can see you love architecture, interiors and the arts in your blog. You would love Hillwood estate, museum and gardens.