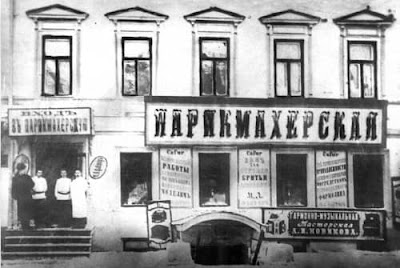 Faktorowicz in the shop door; sign saying Entrance to Barber.
Next door was the wig shop, near Moscow

If I hear one more nasty comment telling immigrants to stay in their own countries and leave us alone, I may have a hissy fit in public.
You may have read the story of Helena Rubinstein, hard-working & successful immigrant. Now see Maksymilian Fak-torowicz (1877-1938), born in Łódź Russia-now Poland in a Jewish family. As a young adult he started working at Kor­po, Mos­cow wig maker and cos­metician to the Imperial Russian Grand Op­era. Then he set up his own shop near Moscow, selling creams, perf­um­es and wigs. He be­came famous when a travelling theatrical troupe wore his cos­met­ics to perform for Russian nobility, and became a Royal master.

Amid the growing anti-Semitism in Eastern Europe, Max and Esther Fak­torowicz and their 3 children emig­rat­ed to St Louis MO in 1904. In 1908, Factor moved his fam­ily to Los Angeles, to provide made-to-order wigs and th­eatrical make-up to the growing film industry. He became reg­ion­al dis­t­rib­utor for West Coast theat­ri­cal make-up company, Leich­ner and Minor, and he was soon working with the US’s leading filmstars. 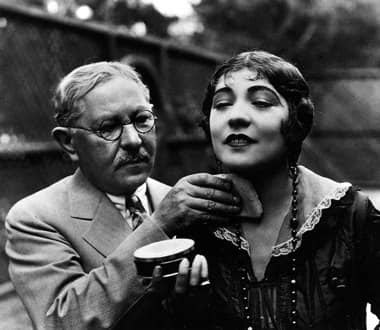 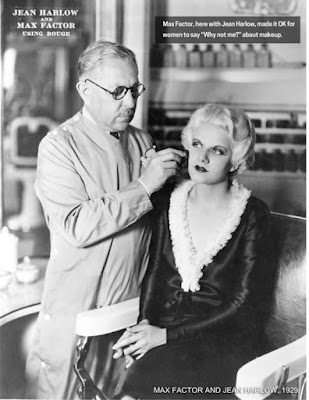 Max Factor and Jean Harlow
As his business expanded, Max moved around Los Angeles searching for a good location. He relocated to the Pantages Building in South Broadway by 1915, before settling in South Hill St in 1916.

In the theatre, powerful stage-lighting sys­tems removed all colour from actors’ comp­lexion, to eliminate shadows. Makeup res­tored the colour and defined facial features to ensure a natural appearance. Make­up also helped the actor to look and feel his character. But stage makeup was unsatisf­ac­tory for the motion-picture medium. Nec­es­s­arily heavy app­lic­ations made it imp­ossible to appear natural in close-ups, and the range of colours devel­oped for theatre failed to look good in motion-picture lighting bec­ause of constant caking.

So the first makeup designed expressly for motion pictures was created by Factor in 1910. It was a light, semi-liquid greasepaint, suit­able for the light­ing used. His solution in 1914 was to create 12 sp­ecific­ally created shades of comp­ounds in jars that could be appl­ied thinly on the skin, giving a glamorous but realistic look. This in­vention quickly became an in­stant hit among film act­ors, enab­ling Fact­or to de­vel­op­ many new pro­d­ucts for them, and stage ac­t­ors. The make-up pr­od­ucts and techniques he creat­­ed for his Holly­wood clients later earned him a special Academy Award.

It eff­ect­ively augmented act­ors’ appearances when filmmaking was domin­ated by arc lighting. And it was the first makeup packaged in tu­b­es, prop­elling Factor’s progress into commercial trade. Any woman could be glamour­ous, he said, giv­en the right tools and make-up skills. In 1916 he started sell­ing eye shadow and eyebrow pencils. Then, with mascara, foun­d­at­ion, eye shadow and lipstick, he enabled ordinary wo­m­en to create their own glamour daily. When he’d launched the full range of cosmetics, make-up, it was the first time all products were available outside the film industry.

Supreme Liquid Whitener (1917) helped actors achieve smoothness of the neck, shoulders and arms. Colour Harm­onies (1918) were powders for film actors that en­hanced their look in var­ious environments. Supreme Grease­paint was the forerunner of today’s foundation cream. In the 1920s, as women aspired to achieve the look of movie stars for themselves, Factor created Sup­reme Nail Pol­ish (1925) to give shine. Society Nail Tint (1927) gave rose colour.

Makeup was used by actors for both cor­rective art and creative art. In the first case, make-up served to 1) cover blem­ishes; 2) prov­ide the face with an even colour tone for photo­gr­aphy; 3) clear­ly def­ine the fac­ial features for visible expr­es­s­ive­ness; and 4) make the actor app­ear attractive. As a creative art, make-up enab­led the player to take on the appearance of most char­acter-types. 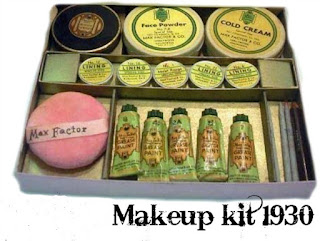 Max Factor Make Up Kit, 1930
The introduction of incandescent lighting on film sets in the 1920s made it possible to standardise the film, lighting and colours of make­up in mot­ion pictures. The Society of Motion Picture Engineers ran a spec­ial test-series in 1928. As a result Factor creat­ed a new line of compatible makeup colours, panchromatic makeup.
His Supreme Greasepaint foretold today’s foundation cream. As films bec­ame more popular, ordinary women wanted to imit­ate the look of movie stars. So Factor began sell­ing his makeup outside the theat­re and movie industry, marketing his most successful products with the Society Make-Up brand name. Although the glamorous assoc­iat­ion with Hollywood gave the brand consumer recog­nit­ion, Factor chose a ladylike name.

More make-up artists working in Hollywood created the Motion Picture Make-up Artists Association in 1927, with head­quar­t­ers in Max Factor Make-up Studio in North Highland Ave where the assoc­iation held weekly meetings for demonstrations. It must have worked; in 1929, Max Factor received an Oscar for make-up! 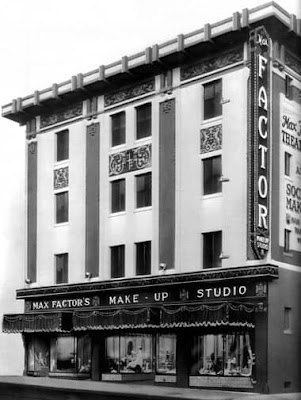 There were several important comp­an­ies in the long history of lipsticks, but no one had greater inf­l­uence than Fac­tor. His family-owned, multi-generational company became the best known name in Western cosmet­ics, creating many new products like Lip Gloss and colourless mascara.

Credit for photos  and history
Posted by Hels at 2.7.22

This was absolutely fascinating Hels - I knew none of it. But, turning to your opening statement about immigrants staying in their own countries, I do wonder when there is going to be a serious debate about this. Or even if people are grown up enough to have one. No sensible person can deny the contribution that many immigrants make to a society, but if we as a global community don't work out how to manage the migration of people in the 21stC, I fear a lot of people are going to perish.

Immigrants who struggle in their own countries are usually so thrilled to get into a new, safer country, they will do anything to get well integrated. Including working very hard, like my parents. Max Factor was clever, ambitious and lucky in his timing.

So Factor was in fact Factorowicz of Lodg'. Nothing new about that. There's an east-european migrant behind any grand thing in the West.
As for the Max Factor line - I was never quite interested in make-up products, but mainly in skin care products. I found the Max Factor ones as relatively good and affordable.

that is true. Migrants needs decent jobs, food, schools, houses and language lessons, even though most nations are suffering at the moment. So dozens and dozens of countries have to take their share of oppressed or hungry people, even if the United Nations have to realign funds on a large scale. Imagine if starving families keep on drowning at sea because the boats are too small :(

I cannot imagine what would have happened, if my family weren't given visas to migrate here before WW2 or my in laws after WW2. They would never have contributed as heroically as they did in their new country.

of course. Migrants usually work very hard out of gratitude, rather than from a desire for wealthy or power. Plus also to give their children a much better life than they had themselves. It worked in my in laws' case - their children did high school and university here, making enormous contributions in medicine and education.

I too never think about make up, except for blusher in winter when my suntan has faded. So I wouldn't have known Max Factor if he was sitting in the lounge room.

But he was a perfect example of an Old World migrant moving into the New World and succeeding. He moved cities as needed, he worked very long hours, he adapted scientifically to motion-picture lighting, and he saw the wisdom of including ordinary women in his marketing plans. I am exhausted just thinking about his career!

Andrew,
I wonder if hair and makeup are not significant enough contributions for a migrant to make to his new homeland. Perhaps Tesla or Einstein would have made my point more clearly, although everyone knows their stories already. Max Factor seemed more human.

A fascinating post. My daughter has just read a couple of books on Max Factor and has been telling me all about the history.

I wish wish wish I had a daughter. My sons were educated and intelligent boys, but they had zero interest in literature, social history, travel, cinema or the arts :(

The first book I read was "Max Factor: The Man Who Changed the Faces of the World" (2012) by Fred Basten. Then "Max Factor and Hollywood: A Glamorous History" (2016) by Thomas etc. But I would have liked more analysis of the migrant experience.

Have a look, Helen.

In 1904 30-year-old Maksymilian Faktorowicz stepped off the SS Moltke onto the New York quayside and entered the vast immigration shed at Ellis Island ahead of his family. They joined one of the long lines, shuffling forward among the nervous whispered conversations around them in a range of European languages, feeling that mixture of hope and anxiety that underpins the new immigrant experience. A few weeks after they arrived, St Louis hosted the World’s Fair, a seven-month event featuring pavilions for 50 countries and 43 US states. Factor, who at the time spoke no English, co-opted a local businessman as a partner in a stall selling his home-made cosmetics that were already the result of years of innovation and expertise.

two things strike me as critical in this migrant's experience. Firstly language - not knowing a single word of the new language would drive us all to distraction. Secondly connections. Without his brother Nathan in St Louis, Max Factor wouldn't have been surrounded by a warm family welcome. Nor would anyone else have persuaded Max to display his make-up and cosmetics at the amazing St Louis Fair.

Hi Hels - each country is made up of immigrants ... humans have always travelled ... who knows how the world will cope, but we need to. Almost here we exist on migrants - our buses, our NHS, agricultural workers (when they could get here) ... and on - thanks for this - I've never been a great make up fan ... but know that many immigrants changed our lives, or children of immigrants - many, many ... interesting - thank you - Hilary

some nations (eg Lebanon, Israel, United Arab Emirates, Australia, New Zealand, China) have more than 25% of their citizens born overseas. They hopefully bring new skills with them, as you noted, that will greatly add to their new nations - military skills, specialist agriculture, academia, manufactures etc. As long as there is no exploitation by greedy bosses.

It reminds me of the era when France expelled half a million Huguenots. These families carried their special skills with them (gold and silver craftsmen, weavers etc) and changed Britain, Germany, South Africa's economies for generations.

Different from the old days, Brasil now seems to be receiving heaps of new migrants from Bolivia and Venezuela, asylum seekers looking for a safer and more productive life. I hope Brasil receives them happily and integrates them well.

yes it is mind boggling to think of the economic loss to countries caused by largely racist exclusion of people . It might be a way of cutting through , using the economics argument instead of the common human decency one to deal wit these often right wing f....ts !

exactly..especially when we remember that, apart from aboriginal communities, all families in Australia were once migrants from somewhere else. Not only do migrants work longer hours and create essential services/products, they seem to be very ambitious for their children educationally.

However racist the anti-migrant population is, the governments that argued for tougher policies, like dragging little boats back out to sea, have to acknowledge the number of people they drowned.