The Teacher was set in Bratislava in the late communist era, and examined the abuse of power at a middle school. Mauréry took the part of a middle-aged educator who headed the local Commun­ist party and used her pupils to manipulate their parents for her own advan­tage.

The action alternated between two strands that later joined together. At the start of the 1983 school year, Maria Drazd­echova greeted her new class by asking them to introduce them­selves and to share what their parents did for a living. She explain­ed that she was a widow of a high-ranking military off­icer and that she needed to know how the parents might help her. 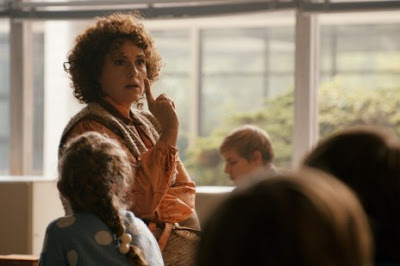 Maria Drazd­echova laid down the law to her students,
from the very first day of school

The second strand other started in 1984 during a secret meet­ing between the school’s head teacher and the parents. The div­ision between the teacher’s supporters and detractors was quickly evident.

Drazdechova did indeed spend her evenings on the phone, asking one parent to pick up groceries, a second parent to fix her lamp and a third parent to set her hair. In return she advised the parent on which specific lessons his/her child needed to learn, before a test was given.

But not every parent obeyed Drazd­echova’s demands. Marek Kucera worked as a ticket manager at the airport. When the teacher asked him to transport cake to Moscow for her sister, he wouldn’t risk his job. But Drazd­echova resented his obst­in­acy and took out her displ­easure on the Kucera’s daughter Dan­ka. With only three of the entire class rebelling against Ms Draz­dechova’s behaviour, Danka stood out. In fact this enthusiastic young gymnast was soon suicidal.

Filip Binder, a young and talented wrestler who fancied Danka, also answ­ered the teacher back. Often! At first the harsh Mr Binder did not understand what was happening to his son and beat him up for missing wrestling practice, unaware that Drazdechova used her pupils' labour for her own benef­it. Even though Mr Binder had a reput­ation as a drunk and a petty criminal, he refused to be black­mailed into providing labour for the teacher. 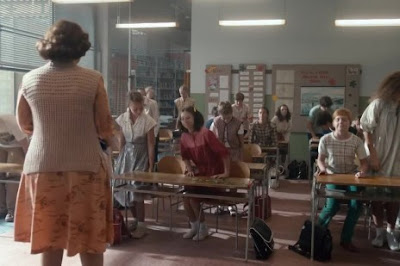 The form 2 students were very respectful to their new teacher.

At the very tense parents’ meeting, the Kuceras & Binders signed a docu­ment drawn up by the principal who had no choice but to discipline the poor teacher. Of course the other par­ents, who had “improved” their children’s marks through cooperation with Drazdech­ova, wouldn’t support the Kuceras and Binders. I was very anxious throughout the film, trying to guess which of the other parents would cave in to their fears!

The cute, quiet Mr Litt­mann, once a respected professor of astro­phys­ics, had been reduced to manual labour after his brilliant wife had left the country and abandoned her son. Drazdechova fancied Littmann and offered to help him with a proper job, whilst trying to get the young father into bed.

Life got worse for the students and parents. The teach­er's corrupt beh­av­iour and one student’s suicide attempt forced the princ­ipal to call an urgent parental meeting. They were asked to sign a petition to get Ms Drazdechova out of the school. The teacher's high connections within the Commun­ist Party forced her supporters and detractors to line up in the meeting, but they still had to decide to go against her in public OR remain silent and safe?

Lots of our Melbourne friends were asking themselves the same question after the film – what would they have done, had it been their children? Not unquest­ioning compliance with Ms Dradechova’s demands, but not abandoning their children either. 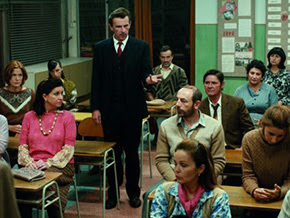 The very tense parents' meeting was splitting into two halves
- the teacher's supporters on one side and her opponents on the other.

The interiors of the families’ flats were extremely small and totally lacking privacy. But they were all decorated with colourful 1950s & 60s wallpaper and curtains, a la Robin and Lucienne Day. It was suggested that modern viewers assumed that communist era flats were aust­ere. They might have been tough days, but Slovak families valued home life.

Some published review­ers thought that dismantling comm­un­ism was goal of the story i.e  the film illustrated the dangerous moral vacuum that was created by repressive communism. If the working classes did not earn enough money to live well, they would have to buy their way out of the situation by being corrupt, or going along with other peoples’ corruption. I, on the other hand, was sympathising with the teacher’s personal drama, loneliness and lack of public respect. Perhaps she was a victim of her late husband or of her party bosses.

It was said the story had been inspired by a real case! That means that the viewer had to jump from a very specific time and place … to a univer­sal story of fear and power. The mundane nature of Ms Drazdechova’s corrupt demands confirmed the film’s satirical mode, but the script still paid careful attention to how the teacher’s re­quests weighed on her students, their parents and the viewers alike.

Thank you for this Hels. I have not come across the film before. I will seek it out on Prime for a viewing. It sounds right up my street.

Hi Hels - I haven't come across this ... but it's one I appreciated has been made, but I really couldn't watch it, although I've realised these things happen. Thank you for letting us know about - Hilary

Where can I see the film?

mine too, although notices of Czech films only appear in my email because of my beloved's family culture. If you do see The Teacher, please let me know what you think.

I understand exactly what you mean. We know that people have a hard time finding their right place in times of conflicting political or religious values .. seeing it visually presented is even harder. Nonetheless this film is worth seeing.

I saw the film in one of the Palace Cinemas, but this was pre-Covid of course. Now Stan might be the best place for streaming.

Thank you for reading the post, but no advertising please. Did you identify with The Teacher in any way?

What a film! For me though, it is probably better to read your summary and critique than see it. There are some hard moral and personal decisions to make for the characters.

Nod...it is FAR easier to see films and read books when there are no moral decisions to be made, especially hard decisions. So I too had to think long and hard about seeing The Teacher.

But if we don't stretch our minds and souls, we may as well just see hilarious and light hearted comedies.

it is possible you don't understand any more Slovak than I do. Thank goodness for subtitles :)

It all reminds me of officers in the army who used soldiers for errands and fixing all kinds of things for their house and family. There were quite a few cases of this sort.

if you see The Teacher film, please leave me some feedback.