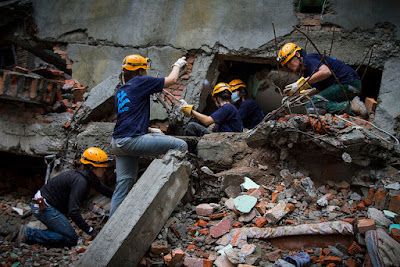 Firstly two terms to be explained. A] Tzedakah is Hebrew for social justice, in which the donor benefits from giving, just like the re­cipients benefit. That’s because tzedakah builds trusts, and requ­ir­es contributions of time and effort. My grandparents & pa­r­ents gave 10% of their net incomes to charity yearly, and I gave the same pro­portion of my pocket money into the school charity box each Friday.

B] The biblical Tikkun Olam law has been interpreted in the mod­ern era as “fixing the world by building a just society”. Post-WW2 they interpreted the expression as: when the world shall be perf­ect­ed under the reign of the almighty, as a responsibility for Jew­ish people to work towards a better world. As leftist progressive Jewish organisations became main­stream later in C20th, tikkun olam gained traction.

IsraAID is a global organisation based in Israel that helps dist­res­sed people worldwide, fulfilling both of these two moral imperatives. Here are some examples:

The lovely Greek island of Lesvos became a site where thousands of refugee from Syria, Iraq and Afghanistan were arriving on over­load­­ed rubber dinghies. Due to the harsh conditions they faced in their home coun­tries and at sea, an IsraAID emergency relief team, , along with Spanish life-savers, went to save the refugees who land­ed. The IsraAID team had nurses, doctors, para­med­ics and psychologists. 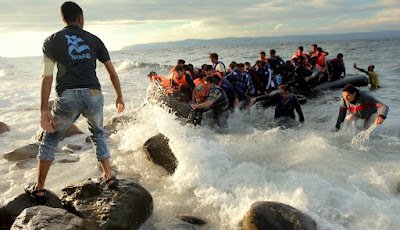 Desperate refugees, being taken to safety on a Greek island by IsraAID
Australian Jewish News
2020 was a chaotic year. In Jan IsraAID helped Puerto Rico’s earth­quake vic­tims; in Feb it shipped personal protective equipment to Chinese hospitals; in May it fed Ven­ezuelan refugee fam­ilies in Colombia; in June it organised re­fug­ee volunt­eers in Greece and Ger­many to sew Covid face masks; in Sept it dealt with Moria Refugee Camp’s dis­as­t­rous fire in Greece; in Nov it dealt with hur­r­ic­ane victims in Col­ombia & Guatem­ala; and in Dec its Healthy Return to Schools programme in the Bahamas reached 5,000 students.

In 2021 IsraAID and partners rescued a group of 41 Afghan women fleeing Taliban terror, including female athletes and female human rights activists. The rescuers searched the alleyways to pick up women in hiding, without creating sus­p­icion. A jet chartered by a Canadian-Israeli hero flew them from the capital of Tajikistan to the United Arab Emirates, accompanied by IsraAID to care for them.

There were always other organisations eg Red Cross and the UN. But Israel, one of the smallest coun­tries in the world, had a unique advan­tage in humanitarian aid. There were many best prac­tices from Israel that could be used in the world’s most vulnerable communities, in disaster areas eg water technology that was devel­oped in Israel because of water scarcity. The nation’s tiny size was also a huge advantage bec­ause it allowed the organisation to be much more flexible and speedy.

When IsraAID heard of a crisis, they usually arrived there within the first 72 hours. And they stayed for the very long term. Few other organisations actually stay to support long-term needs because they know that media attention equals donor focus. When the pub­licity ended, the organisations moved on. If long-term needs remain­ed, especially trauma and mental health needs, IsraeAID continued.

IsrAID woul­dn’t do anything without local part­ners eg local church, mosque or synagogue, or local government. Mainly the Israelis built a local team, training the local partners in different fields of exp­ert­ise: medical, educational, water etc. Then they supported them for a few years. Local groups eventually took the lead and supp­orted themselves. In 20 years, Israeli teams worked in 56 countries.

When Israel heard the news of Russia’s invasion into Ukraine in Feb 2022, they immediately mob­ilised their rapid response teams. They were not going to send the teams to a bombed-out zone, so they needed to see where the refugees from Uk­raine were going. In the earliest days IsraAID chose Moldova because a] there was a large num­ber of refugees there and b] it was the only neighbouring country not part of the European Union/NATO. And the Moldovan ambassador in Israel asked for urgent support because 400,000+ people had crossed through to Mold­ova, and many were not moving on. Unlike many other refugee crises, only women and children arrived because Ukrainian men had to stay and fight.

Moldova was freezing. People came with noth­ing but the clothes they wore. The Israelis distributed thousands of therm­al blankets, taken from the ware­house in Israel. They built a big tent on the border, distributing food, water, gloves and hats, and offering a warm space for the mothers and children to relax. 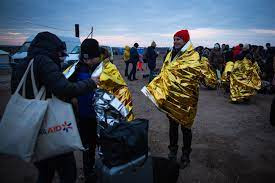 Israelis distributed thousands of therm­al blankets
to Ukrainians in freezing Moldova, 2022
Note the IsraAID bags. Facebook
Most of the refugees who stayed in Moldova eventually moved to the capital Chisinau, so IsraAID sent another team there, building child -friendly spaces. The refugees were scattered around many buildings, and the athletic stadium became a huge refugee camp. The main goal was setting up seven safe child-friendly spaces to learn and to play, and for the mothers to re-energise. They recruited large numbers of Russian-speaking Israel­is, experienced in social work or early child­hood education. And they recruited 35 Mold­ovans, and Ukrainian refugees, to work with the Israeli team.
IsraAID was/is a beacon of light in a world of darkness. It showed how ordinary citizens gave practical meaning to loving distressed neigh­bours anywhere, bringing them fast, timely and sustained aid. Sofar it has worked in 56 countries for 20 years. 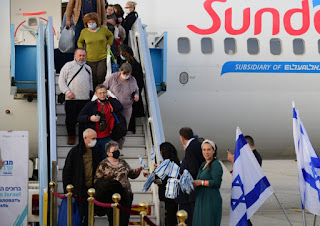 That's a very impressive record and the fact that I've not heard of the organisation speaks of its low key and smooth approach with high achieving results.

The volunteers are heroic but who pays for the plane trips to far flung countries?

I normally like governmental control of an international project, but people can only survive without water, food and warmth for a very short time. I can imagine by the time a government got its own members on side, dealt with the opposition's negotiations and realigned next year's budget, IsraAID would be too late to save humans. This organisation starts its planning ON the day of the crisis!

Airlink has provided flights for 270 skilled personnel to travel to Ukraine, Poland, Romania, Hungary, Slovakia, and Moldova on behalf of 20 nonprofit partners providing humanitarian assistance to populations affected by the war. The largest aid-groups supported to date were in from IsraAID. Thank goodness for moral companies and individuals.

Hi Hels - I'm sure I've seen their name around recently ... but can't exactly recall where. So introducing us to this organisation, which is aimed at providing humanitarian aid, is so good to read about and to know. They've certainly provided a great deal of targeted aid, with the aim of providing some sort of stability for so many de-stabilised peoples. Thank you to them ... and thank you for introducing us to their cause. All the best - Hilary

Living in Israel, I know ,of course, about IsrAid and its humanitarian activities. I especially appreciate their role in places struck by natural disasters. We, humans, cannot prevent natural calamities (earthquakes, volcano erruptions, hurricanes, tzunamis etc...). We can, however, minimize loss by saving lives, fixing damage and helping people go on with their lives.

You found the key issue in one go: to give targeted aid with the aim of providing some sort of stability for so many de-stabilised peoples in struggling countries. If the local boyscout hall burns down here, I will happily give $100 or more, and never think of it again. If an earthquake in Nepal requires humanitarians to dig out live human beings, I would think long and hard about participating ... it might be too dangerous.

natural disasters are tragic and so are manmade disasters that are totally out of the locals' control. Imagine North Korean refugees trying to get to safety in South Korea, but the rest of the world not even remembering the Korean War of the early 1950s and what's happened since :(
Thankfully IsraAID worked in South Korea, providing psychosocial support training sessions for organisations working with North Korean defectors. Noone else seemed to have been there.

Right.... what a situation under the Taliban :( The reason this particular rescue measure was barely discussed publicly is the vulnerable women would have been severely punished, had the project been detected. So would any future women who needed to flee from the Taliban.

IsraAID warmly thanked the governments of the United Arab Emirates and Albania for the collaborative efforts they extended.

Thank you for highlighting this amazing organisation. Giving money is something I do but I am not brave enough to enter these places around the world which must hold dangers for these life savers. So many give so much of themselves to help others.

that is the truth for most caring people, yes. We will give money to an important cause, and we might even give our time to a local project that is relatively simple eg helping in a food kitchen for our community's hungry. But there is NO way that I would risk my life caring for hur­r­ic­ane victims in Col­ombia & Guatem­ala, for example. Those volunteers are very special people.