Nationalmuseum, Sweden’s museum of art & design, holds c700,000 ob­j­ects: paintings, sculpture, drawings and graphic art from the C16th until the early C20th, and applied arts and design. The National­museum is responsible for preserving and making art accessible to all Swedes. 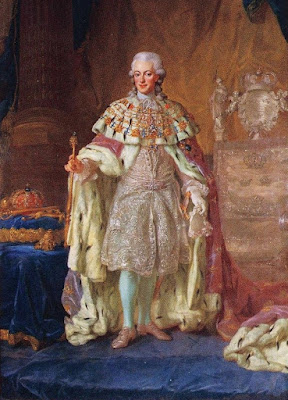 Portrait of King Gustav III of Sweden
by Lorens Pasch
donated to to the Vasa hovrätt in Finland in 1783. Wiki
The recent exhibition at Nationalmuseum, called 18th cent­ury: Sweden and Europe, focused on the relations between Sweden and Eur­ope during the C18th in the visual arts and applied arts. It scanned across a century of wars and severe hard­ships, but also a time of opt­imism for the future and a belief in science where art was closely re­l­ated to politics and dipl­om­acy. Pefect timing. The C18th Rococo style be­came prevalent in interior design, painting, sculpture and the dec­or­­ative arts, starting in France, southern Germany and Austria.
The exhibition showed the new ideas and artists who came to Sweden from France, to partic­ipate in building the new Royal Palace of Stock­holm early in the cen­tury. The exhibition also looked more close­ly at the direct impact King Gustav III of Swed­en had on culture later on.

But the works on display I would have most loved were: porc­el­ain, sil­ver and gold art, furniture etc. Since gold-silver art was my life’s passion, I would have given my spouse’s eye teeth to have been there.

The tradition of jewel-encrusted portraits of the monarch had devel­op­ed earlier in the French court, and soon became a model for other Eur­o­­pean royal houses. These portraits took the form of a pend­ant or was mounted in a jewelled setting on the lid of a gold box, the most pres­t­igious gift of appreciation. Queen Christina (1632–54) was the first Swedish monarch to adopt this French fash­ion, which then flour­ished in the C18th. 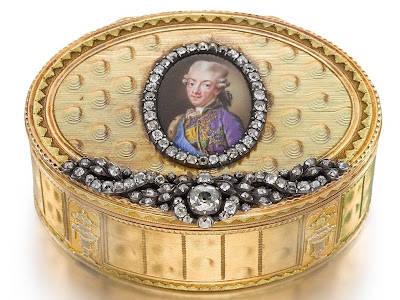 Johan Georg Henrichsen: Portrait of Gustav III, c1778.
Gold box, guilloche, chased gold, diamonds, enamel. Made in Hanau.
Sotheby’s. Dec 2021
Thanks to the History Blog.
King Gustav III (1771-92) often handed out gold boxes as a sign of royal favour. Contemporary records show that the king took a sig­nificant per­sonal interest in the des­ign and gave detailed instruct­ions to the artists. Sometimes the decoration consisted of his monog­ram in diam­onds; other times his portrait was fram­ed with jewels. Specialist cr­aftsmen collaborated to create the boxes. A sil­versmith first prod­uced the basic gold box, which was then be decor­at­ed by an engraver and ad­orned with gemstones by a jeweller. Lastly a miniat­urist added the port­rait.
There were practitioners of all these crafts in Gustavian Stockholm, but some boxes were imported from Russia, Saxony or France. The gold box was made in Hanau, in the present-day German state of Hessen. It was oval-shaped and décor­ated with a guilloche-engine-turned wave and circle pattern with­in a chased/embossed border. It was made in a combination of two different gold alloys to prod­uce colour variations. After the box reached Stock­holm, the king’s por­trait was on the lid in a frame of diam­onds.

The portrait was the work of Johan Georg Henrichsen (1707–79), court enameller of King Gustav III, appointed in 1773. He worked ex­clusively from originals in pastel or oil created by other artists, but his col­our palette was more intense. Hen­richsen also produced coats of arms of nobility using miniature techniques.
Scottish adventurer/officer John Mackenzie Lord Macleod, 4th Earl of  Cromartie (1726–89), had been loyal to Bon­nie Prince Charlie, the Young Pretender. He was held prisoner after the British army defeated the Jacobites at Cull­od­en in 1746. Two years later he was pardoned, but the family had its estates conf­is­cated. In 1750 John Mackenzie joined the Swedish army, becoming Colonel of the Björneborg regiment.

Mackenzie left the Swe­d­ish army and returned home in 1778, ha­v­ing been granted a full am­nesty and having his estates res­t­ored. On his depart­ure from Sweden, the gold box was given to him from King Gustav III as a gift. It stayed in the family for c200 years, un­til heirs sold it in 1969 then an auction at Sotheby’s London in 2021 (sold for $220,000).

Nationalmuseum receives no state funds to buy artwork; instead they rely on donations from private foundations. The Mackenzie box, gifted from Anna and Hjalmar Wicander Found­ation, is now on display in the National Museum’s Treasury, alongside a miniature portrait of Mackenzie. 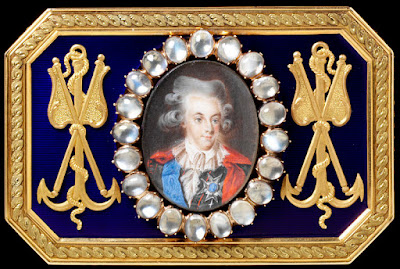 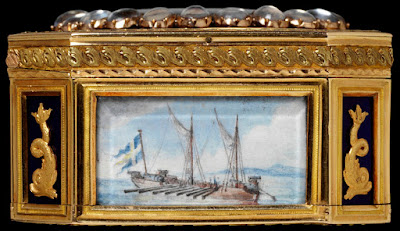 The Gustavus III Box
Swedish, 1751
The Victoria & Albert Museum:
Above: cover
Below: side panel
For other gifts of grandeur from Gustav III, see 1751. One enamelled gold box was set with a miniature in watercolour on ivory under glass of Gustavus III of Sweden (1746-92), surrounded by moonstones. On the base and sides, see miniatures of ships or the Swedish naval port of Karlskrona  where war­ships were mount­ed. The back side of the box featured a scene of a fortification at Sveaborg, the Swedish fort near Helsinki. The box’s ends were also mounted with watercolours on ivory.
King Gustavus III presented this box to British banker, inventor and patron of the poet Robert Burns, Patrick Miller of Dalswinton (1731-1815), given to Miller after he offered his double-hulled ship with a paddle wheel to the King. His ship, the British Sea Monster, was dep­ict­ed on the base.

King Gustavus III died a young man in 1792. He was at a masked ball when an assassination attempt caused a terrible infection. But I am not sure why very few of his royal gifts of grandeur have survived intact.
Posted by Hels at 11.1.22

I don't think Henrichsen and I ever met. Yet his portraits seemed very royal. Thanks and happy new year, Helen.

happy new year to you too. A healthy, safe one!

I didn't know Henrichsen either, so I had a look for other enamel portraits to examine. Have a look at his work called "Swedish Kung Gustaf III" in the Finnish National Gallery

Good to see you. Gustav was a man of culture and also a man of very expensive taste. Who paid for all those diamonds? and gold

money didn't seem to be a problem for this very generous king. As well as pouring financial support into the Royal Opera, Royal Ballet, literary and art academies, he bought up land around his palace and built lakes, gazebos and temples. Jewel-encrusted portraits of the monarch on small gold boxes would have been all pleasure for him.

Hello Hels, Gold snuffboxes are easy targets for theft, after which many are melted down, as their individual decoration is too identifiable. This may partially account for their scarcity. Also, even though he is described as generous, is there any real estimate of how many of these royal trinkets he gave away? The way you detail the individually supervised design and manufacture process, they could not have been produced at a fast clip. Also, in interior photos of many fancy homes, we often see collections of small gold snuffboxes and objets de vertu on tables. Perhaps some of these are from Gustav III, waiting to be identified.
-Jim

I am passionate about gold and silver art, so if I legally bought a piece of King Gustav art at an auction house, I would never ever EVER sell/give it to the NGV in Melbourne, Nationalmuseum Sweden or anywhere else. And because the snuff or jewellery boxes were so easily placed on a library shelf, who would even know?

Gustav III poured money into the army and navy, but I was much more interested in his endless generosity to cultural organisations and causes. Even if he did it largely to enhance his own glory, what a man!

i j=know very little about Swedish history but have found a forebear who arrived in Denmark from Sweden having written religious tracts which he then published. I think he originally came from what would become Prussia /Poland and he was responsible for my fathers family coming to Northern Germany / Denmark . I wonder if the Gustavian marauders who marched through these parts of northern Europe were instigators of his flight??
Hels have you come across "The Great". Its on Stan I think and very funny . We have been enjoying the amazing costuming and the somewhat loose and naughty interpretation of history .

Thanks for the reference to The Great, on Stan. I normally don't enjoy right wing Western views on Russia, but Stan advertised this as a "genre-bending, anti-historical ride through 18th Century Russia". Satire is my favourite form of drama :)

You will have a good chortle!!

King Charles XIII (1748–1818) was the second son of King Adolf Frederick of Sweden and brother to King Gustav III (1746-1771). Charles XIII was loyal to his brother Gustav throughout his life, took the King's side during the conflicts with the family, and helped him during the Coup d'Etat in 1772. After the assassination of Gustav, Charles eventually became king of Sweden.

Thank you for that interesting post, Helen, from which I learned a lot. I admire people who bring culture and art to bloom -of course I do understand the question above of Ex-Pat, which reminds me of a line from Bertolt Brecht: "Who built the 7-gated Theben?", meaning that the honour belongs to the poor workmen - but I am so glad someone enabled art. On Wikipedia I now looked up the life of Gustav III - had he but listened to the warning of his old friend Carl Pontus Lillehorn!

that gold presentation snuff box is gorgeous and reminds me very much of the shape, purpose, materials and decoration of the Gustav III box c1778. Even though the two brothers' boxes were made decades apart, they were both made in Hanau. Thank you.

Gustav III of Sweden only lived a short life (1746-92), but he didn't die from anything like cholera. He was assassinated at 46! He may have thought he was a much loved king, but even so, he had a responsibility to protect himself. Yet he did NOT wear metal armour in the army, he didn't travel with body guards and he didn't go under cover when the nobility conspired to have the king assassinated. It was clear already in 1791 that the nobles thought murder would be the only way to reform the constitution.

I know a lot about art history, but I know sod all about computers and streaming services. A grandchild is coming on Sunday to set it all up, bless his heart.

If you ever have the urge to write a guest blog post for me, reviewing The Great or any other historical series, just let me know :)

Maybe the reason that why very few gift are survived is that next years after king's death started in Europe war, which finished in 1815 (included Napoleon's war). War was very expensive and Sweden lost their royal familly - new, Bernadotte (still rule in Sweden), changed Sweden's foreign policy.
And, in this time, the tastes in art have changed :)

interesting point, yes. There were so many wars involving Sweden before, during and after Gustav III's reign, it is amazing that the king ever turned his mind to literature, opera, music, decorative arts, palace architecture or anything but the armed services. I think Gustav's worst problem was that he couldn't trust his own nobility, so no matter how cultured he wanted Sweden to be, in the end his life was going to be short.

these were truly gifts of grandeur, yes. If you do something wonderful for the nation here, you can get initials after your name eg OA.